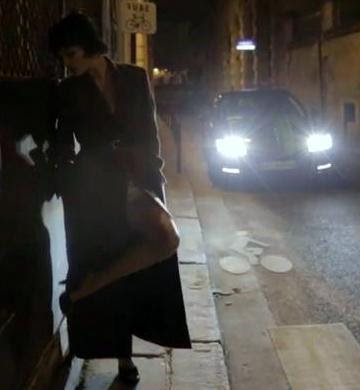 Yes, it's true.  Your genial host was once in the position of being in a brothel for all of half an hour, surrounded by scantily clad lovelies and two guys wearing nothing but the skimpiest of towels.  Admit it, you're intrigued, aren't you?  Some people who visit this blog under cover of various proxy servers will even now be thinking "Doesn't surprise me what depths of depravity that disgusting troll will sink to!", but they'll  read on in the hope of finding some nugget of info with which to metaphorically batter my already scurrilous reputation (in certain circles anyway).

So here's what happened.  A pal 'phoned me one night to say that he'd hurt his back at work and was looking to get some remedial attention on it.  He'd rung up a couple of physiotherapists (or whatever they're called) and was appalled at what they wanted to charge for a consultation on account of being a bank holiday weekend.  So he'd looked up Yellow Pages and discovered a massage parlour in the West End of Glasgow and wanted to know if I'd go in with him as I was familiar with the area.

The parlour, known as Aquarius, was situated in Park Quad, just around the corner from a B&B in Park Circus, where I and a young lady had stayed the night a few years before.  (It's all right, I knew her.)  Parked outside, I took one look at the place and said "Are you mental?  It's a brothel!"  He was philosophical about the matter.  "I should still be able to get my back massaged!" he replied.  So in we went.

He was charged £20 entry, given a drink and told to go and take a shower.  I explained that I was merely waiting on him and was advised that for £8 I could use the 'facilities'  (the bar and the pool room).  "Nah, it's all right, I'll just wait here at the desk," I said.  Some girls stood around the desk in their negligees, chatting, and rubbing moisturizer into their thighs and over their bodies.  I had to stoop for a while, and it occurred to me that they'd missed an opportunity in not charging me for the show.

Eventually, my friend reappeared, picked a lady, and was escorted to a room somewhere.  "You can use the pool room if you want," one of the girls said, so I wandered in, then immediately wandered out again on sight of two Chinese guys playing pool, wearing only the smallest of towels around their nether regions. Perhaps it was a unisex brothel, I thought, and they were there to cater to women or gays.  What did I know?  I'd never been in a brothel before (or since).  Turned out that they were two punters, taking a breather between sessions.

So I returned to the desk, where an affectionate black cat decided to make friends with me.  And yes, it was the nearest I got to any pussy that night.  (Thought I'd better say it before one of you did.)  Eventually my pal returned, looking more than slightly embarrassed.  As he informed me after we'd left, the woman had massaged his back for ten minutes, then enquired of him which services he wanted, telling him what was available and the costs involved.  When he explained that he was really just looking for a back massage, she became indignant.  "I'm not here to rub your back!" she said.  "I only make money from what I do in this room, I don't get a cut of the entry fee."  (The door entry fee, that is.)

So that's the story.  A small drink and a ten minute back rub cost my pal 20 smackers - he'd have been better going to a physiotherapist to begin with.  See what can happen when you take the cheapskate route and try and save a few pounds?  Anyway, now that you know the facts, The SUNDAY POST can go ahead and publish their expose on my shady time in a Glasgow brothel - I beat them to the punch and they can't hurt me.

(Let's just hope they don't uncover the story about me and that stuffed giraffe.  I'd never live that down!)

In case you're wondering, a couple or so years later, the place was raided and shut down, so it no longer exists.  Just thought I'd mention it in case anyone hurts their back at work and is looking for a massage parlour where they prefer not to do massages.  My friend could probably have sued them under the trade descriptions act, but then he'd have had to explain the situation to his missus, who wouldn't have been too happy about his little excursion into the seedier side of life.

Perhaps, given your previous professional skills, you could have offered some French lettering for them..?

Yeah yeah that's your story and you're sticking with it.

Nothing previous about those skills, BS - still got 'em, just never use 'em. (And I could never - would never - pay for those ladies' services. Just couldn't do it.)

Well, you gotta follow your lawyer's advice, Phil. Else what're they for?