One factor that may have led to ATLAS/SEABOARD titles burning out so quickly was that, originally, boss MARTIN GOODMAN intended to release only about five new colour comicbooks (plus some b&w mags), but changed his mind at the last minute and ordered around 20.  Having to suddenly come up with that many new titles doesn't really lend itself to ensuring a high-quality product, and another probable factor was the change of direction in some titles after only the first or second issue before the sales figures had come in on the earlier ones.

If Goodman hadn't been so consumed with a desire for revenge against CADENCE for the way they'd treated his son, he may have approached matters with a wiser, cooler head, and had a better chance of being a serious contender.  As it was, some of the titles were dreamt up a little too hastily, and tried too hard to look like what was already on the stands by other publishers. The irony is, of course, that had Cadence/Marvel not dispensed with Goodman Jr.'s services, then it's most unlikely that Goodman Sr. would've felt motivated to re-enter the publishing world and Atlas (Mark 2) would never have been born.

You can all make up your own minds on whether that would've been a good or a bad thing, but, personally, I'm glad we got to see The GRIM GHOST.  That's the only title I thought showed promise and I wish it'd got a longer run than it did.  Thing is, though, you can't kill a ghost, so who knows?  He may come back to haunt us one day.  (He's already had another stab at it, you know - back in 2010.) 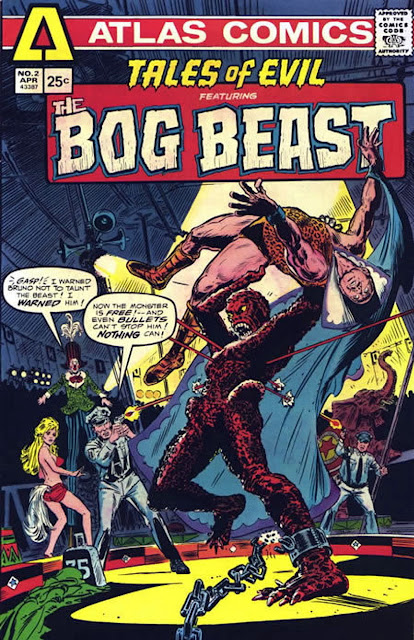 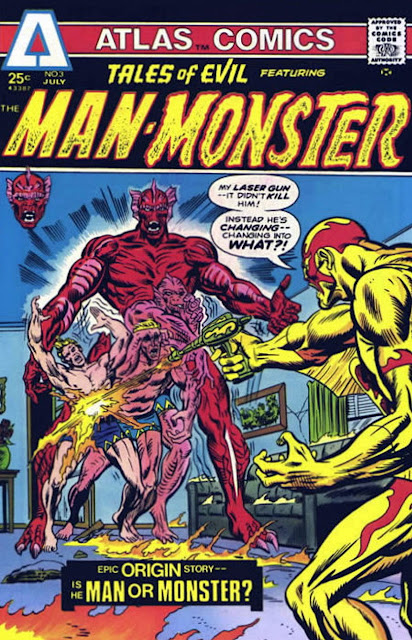 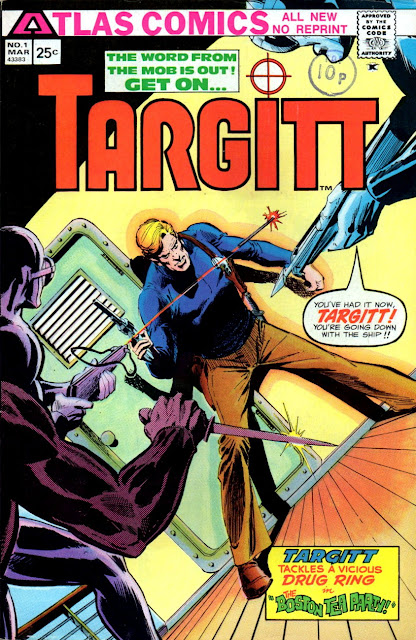 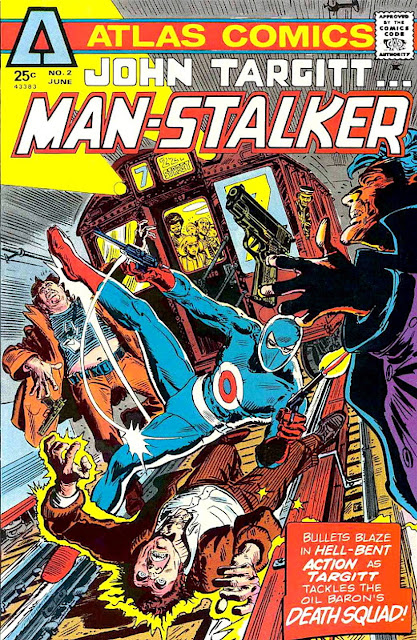 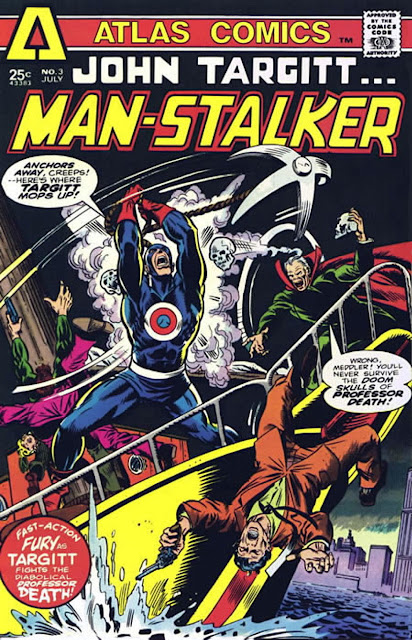 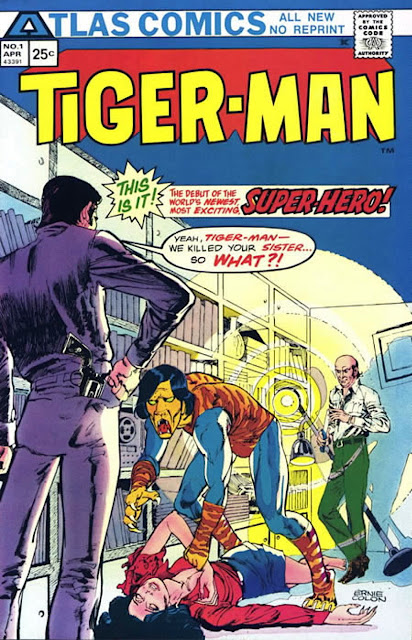 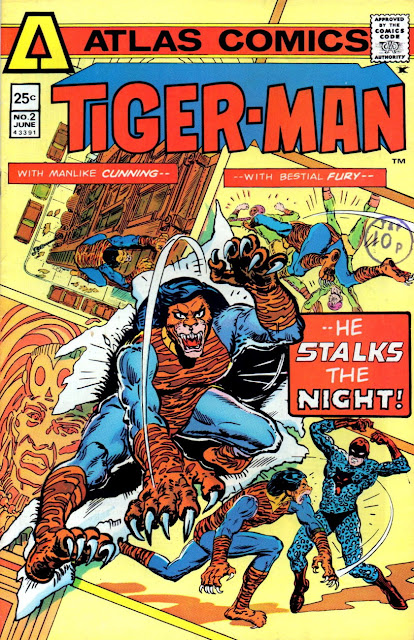 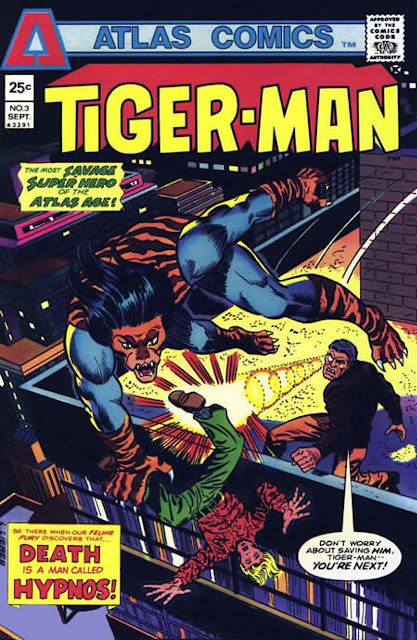 I had a complete set (such as it was) of Tiger-Man. It was fairly easy to compile collections of complete runs, since none of the Atlas/Seaboard titles lasted more than four issues. And local comic book shops often had back issue A/S comics in the bargain bins, for 25-50 cents.

IIRC, there was some explanation for why that tiger was in Zambia, but I've forgotten it. Seems like it would have been simpler to have the doctor do his internship in an Asian country, where he could logically encounter a tiger.

Tales of Evil apparently started as a horror anthology, but quickly changed to ongoing series with continuing characters. That was sort of a trend in comics in general; you can see it in DC's war comics and Marvel's science fiction and fantasy comics (e.g., Our Army At War became Sgt. Rock, Journey Into Mystery became Thor). The caption at the end of TOE #3 indicated that Man-Monster would star in a self-titled spin-off, but, AFAIK, it never happened.

Targitt was another case of changing the concept from a relatively realistic crime drama to a costumed superhero series. And without waiting to see whether the original concept was selling or not.

The artwork in Targitt's first issue looked too cartoony for a straight detective story, but, then again, it gave the strip a distinctive style.

The premise of Targitt was common in movies (Death Wish) and paperback books (The Executioner series), but not quite as common in comics. As originally conceived, Targitt and Scorpion were at least something different, and could have provided an alternative to DC and Marvel. Instead, though, Goodman apparently decided to make them conscious imitations of DC's and Marvel's superheroes. And fans had no need for imitations of Batman and Spider-Man when they already had the real thing.

If I remember correctly, TC, Tiger-Man first appeared in Thrilling Adventure Stories (a b&w mag) before getting his own colour comic. I wonder why that was? I didn't much like the comic to be honest. The premise seemed just a bit too silly.

I all in on on Atlas-Seaboard, a big fan. In fact I began the first online forum dedicated to the company way back when when Yahoo Groups were a focus of fan attention. It was my first experimental foray into the internet in any focused way.

The first wave of Atlas was outstanding, with several comics showing promise. Wulf the Barbarian had a wonderful feel, Phoenix was thematically interesting if weird looking, and Planet of Vampires was a cool romp. But I agree the clear winner in the gang was Grim Ghost which featured great covers and outstanding Ernie Colon artwork.

Thanks, Rip. More than ever I'm determined to re-read Wulf The Barbarian. I re-read Ghostie a few years back, but might do so again as well.