FAVOURITE COMICS OF THE PAST - PART THIRTY SEVEN: THE INCREDIBLE HULK #141

For someone who once prided himself on his memory, it's annoying to find myself forgetting things that I could once recall every detail about.  Take this particular comic for example.  I find myself associating it with a long-gone newsagent's at the far end of the Old Village quarter of my town.  (Yes, it's my town, I bought it and I've got a receipt.)  However, I also tend to associate it with one of two R.S. McColl shops that used to grace the town's shopping centre.  Such uncertainty on my part is uncommon, but it seems to increase as I age.  Maybe if I don't think about it, it'll came back to me.

It's possible that I purchased it in McColl's before going on to visit that other newsagent's - I used to go around various shops in my hunt for new comics - which might be why it seems to fit in with either place in my memory.  H'mm, that's going to annoy me now, until I manage to conclusively sort it out in my mind.  For the moment, the above possibility will have to suffice.
But you don't care about all that!  The INCREDIBLE HULK #141 is the comic that introduced DOC SAMSON to the MARVEL Universe.  Ace illustrators HERB TRIMPE and JOHN SEVERIN were the Marvel equivalent of DC's CURT SWAN and MURPHY ANDERSON, in that, great as both of them were individually, their collaborative efforts always resulted in even greater heights of artistic glory.  However, don't take my word for it - see for yourselves in the spectacular pages that follow.

Hold it!  It's suddenly come back to me!  R.S. McColl's is the definitive answer (er, I think).  Now on to the pretty pictures. 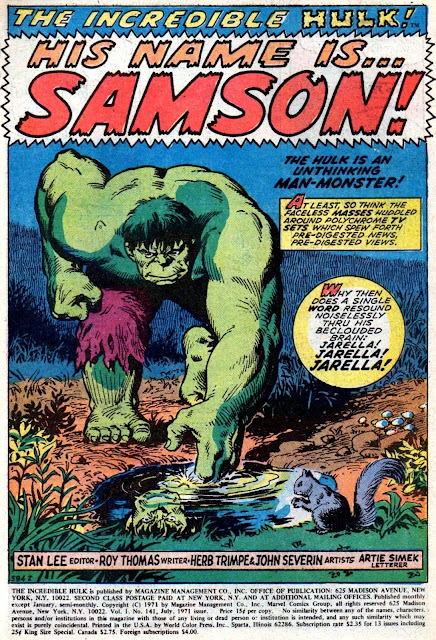 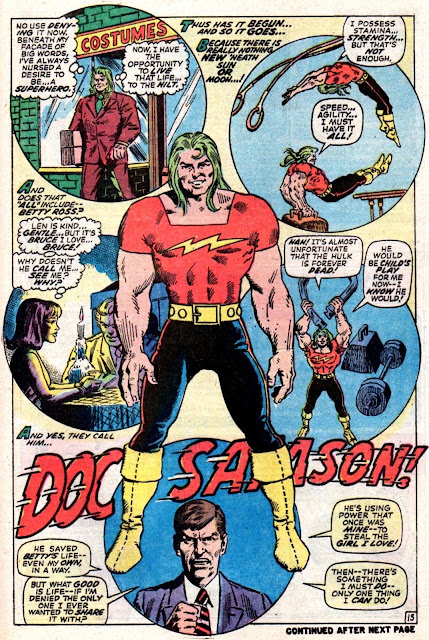 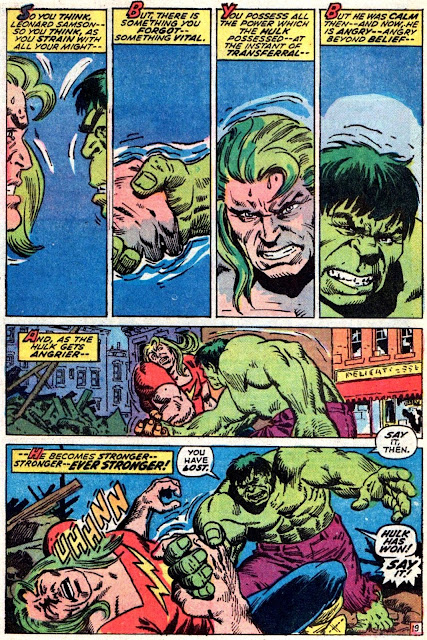 Im finding I don't always get it right as well when trying to recall where I picked up some of my more "milestone" comics but I'm usually in the ball park area (ie the area of a town if not the actual shop ) which is fine by me. I've seen that issue of the Hulk (and 3 others I am after) for sale in one of those Marvel classic collections for £19.99 ( that issues cover is the collected edition cover) If its still there after pay day I may pick it up (skint at present after Christmas).

Yeah, terrific, weren't they? Talking about that Old Village shop, that's where I got the Hulk issue with 'Heaven Is A Very Small Place' - another cracking story. Why can't they write comics like that today? I'm getting concerned about my memory, McS, because I once used to recall things with such clarity, so the fact that once familiar memories are becoming increasingly elusive is a bit worrying. I'm also at the stage now where I forget what I'm saying halfway through a sentence. If my blog posts seem to suddenly jump from one point to a different one, now you know why.

Welcome to your "50's" Kid lol - I can recall some things with clarity others I have an idea of the memory and Im sure my brain fills in the gaps - Yeah comic book stories are not what they were are they.

You seem familiar somehow, but I can't quite place you. Do I know you? Nurse! Where am I? How did I get here? Joking aside, McS, I fear that's what may be ahead of me. Scary thought. I'm reading the Epic Collection of Iron Fist at the moment, and find myself enjoying it more than I thought I would. One to consider when you have some spare dosh.

I think we will all have to cross some "bridges" as we get older Kid, your issue is you have/had almost total recall now that's getting a bit skewed which is only natural as we get older and remember its a long time ago - I read that the average person should not be able to recall to many things from a single past event as that's not the way the brain works (and when a suspected criminal recalls an event with utmost clarity its a design they are making it up) so your doing pretty well. I'm in the process of slimming my collection down (a lot) so only looking at minimal purchases for 2016 (including the Guardians of the Galaxy 70s collection and the new Dr Strange Ditko collection). I always liked Iron Fist especially the black and white" Kung Fu" mag editions (more than the colour comics - except the amazing origin issue with Gil Kane art) so will give that one a miss as got a lot of the original mags.

Regarding that Ditko Dr. Strange Omnibus, McS, I was originally told it was all Ditko, but I've now been advised that it may contain ALL the Strange Tales stories, including Everett, Adkins and Severin. I'd prefer it to be just Ditko, but we'll just have to wait and see. If you've already got a lot of the original Iron Fist mags, you can live without the collected edition I suppose, but I don't have any so it was a most welcome gift from someone.

Guessing this one takes place BEFORE the story in that Marvel book I posted about a few years ago? Or is it the case of a completely different timeline? Can never tell with these things, but I THINK I've guessed right... Right?

Oo-er, you'll have to remind me what that story was, THB. See what I mean about my memory? I'll probably remember your post when I see it again 'though.

I only read this in the giant dollar reprints. I remember my newsagent was near the motorway and flyover bridge. There was a chemist nearby where we dropped our film to get developed run by an Indian family ( I guess all the chemists are now!). It was a good ride by bike and sort of a pain because there was a footbridge which was closer to the house but you had to carry your bike or ride longer and take the regular bridge but share traffic with cars. Makes you wonder why they didn't just use ramps instead of stairs eh? Because none of the engineers rode bikes I guess. It's the complaint people in wheelchairs have. You could have made a ramp or wider door but it didn't occur to you. Good design is worth it's weight in gold.

But does 'design' have any weight? Was this in Britain or America, Phil?

This one right here...
http://twoheadedthingies.blogspot.co.uk/2013/11/a-marvellous-book.html#more

Hulk's getting fooled by holograms then eventually gets knocked out by Doc Samson. Fun stuff!

In the UK kid. Rode my old Raleigh bicycle to the shops on Saturday to get my comics.

My father had the worst memory of anyone I've ever known - he couldn't even remember his own birthday...I'm not joking. He didn't know my birthday or how old I was or what year I was born. And as for his wedding anniversary - forget it...even though it was on January 1st which should be easy to remember.

I heard that he had a good memory for faces 'though, CJ. Which no doubt came in handy when his shaving mirror was broken. (Boom-Boom!)

Perhaps he had an un-diagnosed illness which affected his memory? How long was his memory bad? Always, or just in his later years?

I recall in an interview with Roy Thomas, he said how he used to knock off those Hulk stories very quickly, and was surprised at how popular and fondly regarded/remembered they were.

Kid, I think he always had a terrible memory - he was 38 when I was born so I don't know about his memory in younger years. But he died aged 71 and his memory never got any worse in his later years. By contrast my mother had an excellent memory and so do I - for example I can often remember what I was doing on a particular date decades ago - every day I try to think what I was doing on that date in the past. Yesterday (Jan 25th) in 1982 we went back to school after a month-long Xmas holiday due to heavy snow and on Jan 25th 2011 my old TV was taken away by the council for recycling (I'd just bought a new flat screen TV).

I suspect those stories were better regarded than the ones he spent ages agonizing over, BS. Some of his later scripts were a bit tortuous.

And here's me trying to recall what day it was yesterday, CJ. And I used to have such a good...er, thingy...doo-dah. What's it called again?