Here we are with part four, and it's interesting (to me at least) to note that no ATLAS/SEABOARD title ever made it past its fourth issue -  with quite a few of them not making it even that far!  That may have made it easier for collectors to acquire full sets, but it also deprived them of the joy of anticipating the next issue, so a bit of a mixed bag in that respect.  A few years ago, there was an attempt to revive some of the Atlas characters, but the second time around was even less successful than the first.  Third time lucky?

What was your favourite Atlas comic and why?  Don't hold back - extoll its virtues to the heavens in the comments section. And remember to come back for the next instalment. 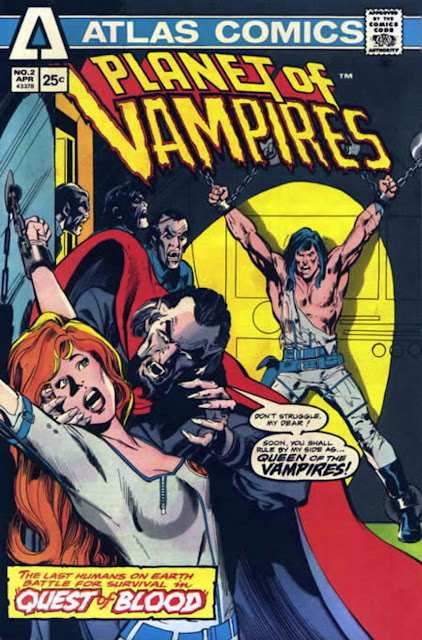 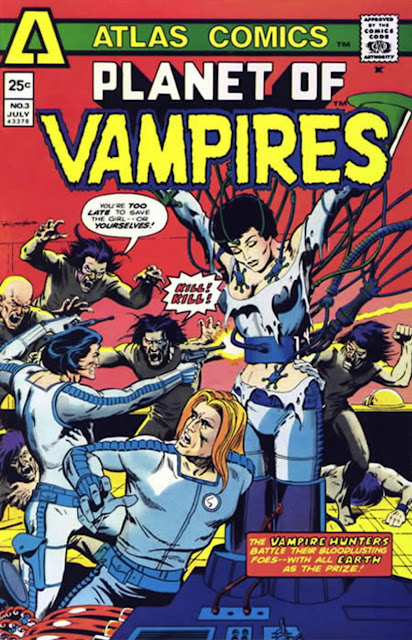 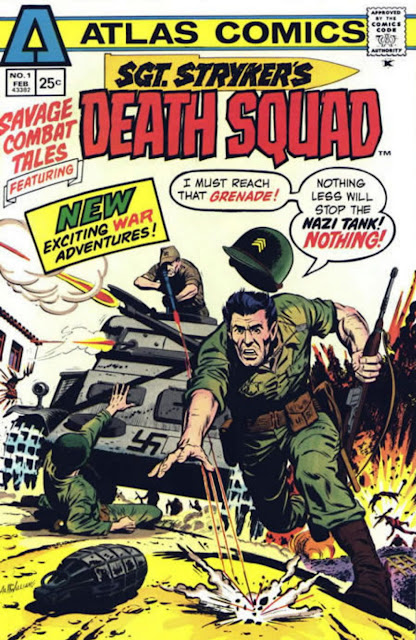 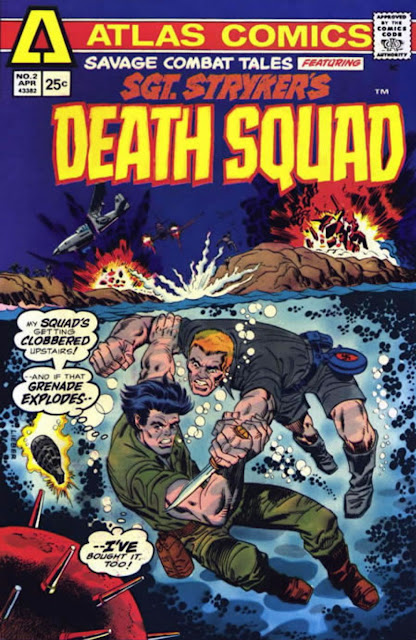 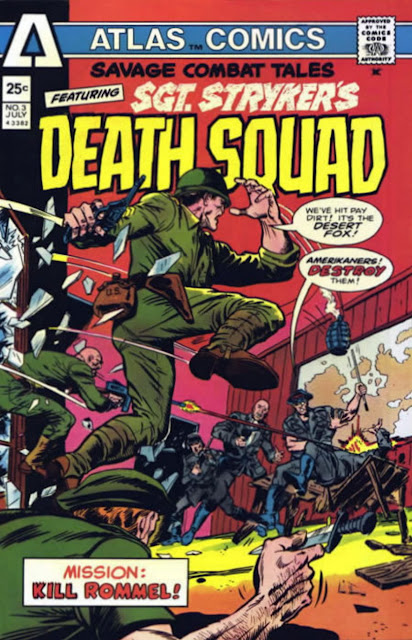 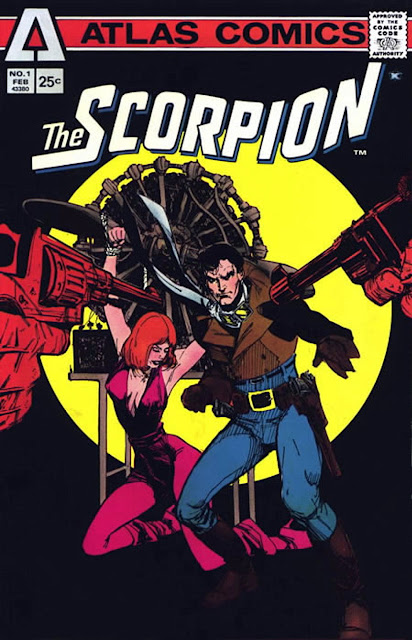 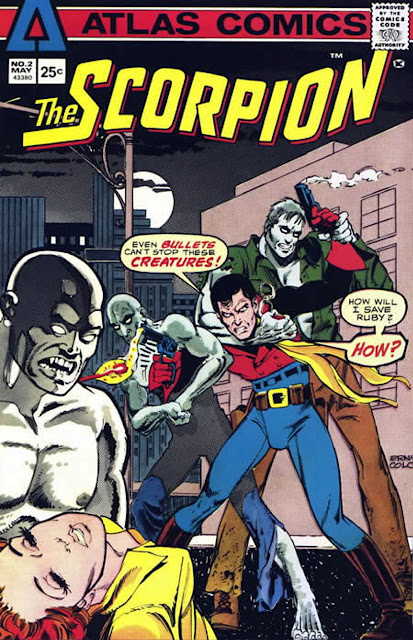 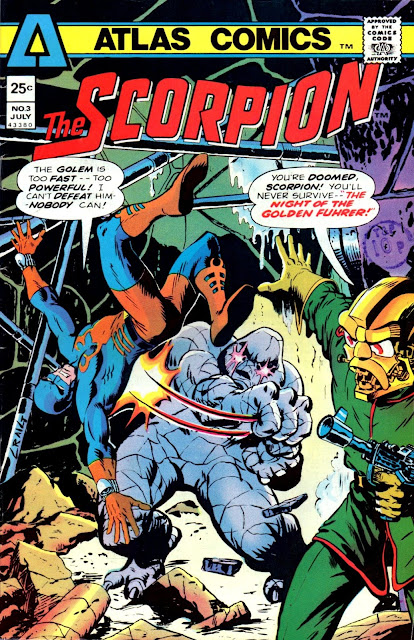 I already mentioned this on the previous thread, but I can't resist pointing it out again -- by sheer coincidence I acquired the first two comics above (Planet of Vampires #1 & 2) for a pound each at a collector's fair this morning!

Following your comment on that thread, Kid, I'm sure you're right that Atlas titles aren't that collectable. This dealer had just a single bin of bronze age comics at a pound each, and they were all quite low on the scale of collectability (but in nice condition). From the same bin I also got two Starlin Warlocks, two Kirby Demons, a Kirby Captain America and a Marvel Feature with Red Sonja. A nice lot of nostalgic reading for £8!

I've got all the Starlin Warlocks, all the Kirby Captain Americas (from the '70s), the first several Kirby Demons (plus a complete collected edition of them), and I think I had that MF Red Sonja comic back in the day. (If not, it was the first ish of her own mag I had.) Well done on the two POV issues - just a shame they weren't The Grim Ghost 'though. £8 is certainly a bargain.

I bought a few of these when they were issued, but the Scorpion set reminded me that on several of the series, they completely changed the concept/character in the third issue. I can't remember exactly what changed on most of them, but I remember that the Scorpion change was a significant one. Seems like he went from pulp-era adventurer to modern-day costumed hero. I remember being puzzled at the time, but I guess it was a last ditch attempt to boost sales.

Interestingly, G, Jeff Rovin said in an interview that they wouldn't even have known the sales figures on the first two or three issues when some of these changes were instituted. Crazy or what?

POV was an obvious mash-up of Planet of the Apes and The Omega Man/I Am Legend, and Sgt. Stryker's Death Squad was an obvious swipe from The Dirty Dozen. (With a dash of John Wayne; Sgt. Stryker was the name of the squad leader in Sands of Iwo Jima.) Both were not only derivative, they were outdated. The POTA movie series had ended in 1973, and the two TV series (one live action, one cartoon) each lasted only one season. But maybe Marvel's POTA comic magazine, and DC's Kamandi, were selling well, and Goodman wanted something similar.

The Dirty Dozen was the #1 hit movie in 1967, and naturally there was some sincere flattery. The TV series Garrison's Gorillas (1967-68) was about a commando-type unit made up of paroled convicts. Hunter's Hellcats, based on the same premise, was the lead feature in DC's Our Fighting Forces in the late 1960's. And the movie The Devil's Brigade (1968) was based on the true story of the First Special Service Force. (The Army used that unit as a dumping ground, and many of its members were, in effect, on parole.)

Oddly, Marvel and Atlas/Seaboard did not get into the act until the 1970's, the former with Combat Kelly and the Deadly Dozen, the latter with Death Squad. By then, the "paroled prisoners on a commando mission" fad had passed.

It may be significant that Sgt. Hawk and Sgt. Stryker were the lead features in anthologies, rather than starring in their own self-titled comics. Maybe Atlas/Seaboard figured that if those strips flopped, they could be cancelled and replaced, and Savage Combat Tales and Blazing Battle Tales could continue uninterrupted.

The Scorpion may have had the most potential. It was not a blatant imitation of one particular comic or movie, although there may have been some influence from old movies and pulp magazine detective stories. Chaykin re-worked it into Dominic Fortune when he was at Marvel.

After issue #2, though, they changed Scorpion to a Daredevil-like costumed superhero. But, as you previously pointed out, it was too soon to have any sales figures, so, for all they knew, it was already selling well as it was. With both Phoenix and Scorpion, they tried to fix it before they had any reason to think it was broken.

I think Goodman must've looked at various titles, TC, and thought they weren't 'Marvel' enough, hence the changes. The Scorpion figure on #3's cover is in a Spidey or Daredevil-type position, even 'though The Destructor sort of looked like a Spider-Man or DD-type character already. Apparently, the original idea was for Atlas to release about 5 new mags, then Goodman changed his mind at the last minute and wanted about 20.