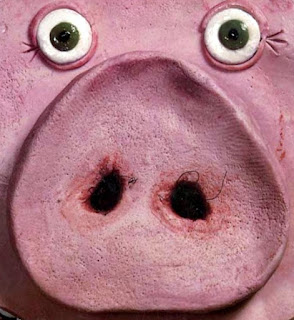 I notice that on the FACEBOOK page of someone whose
post on the so-called comics industry I addressed in some detail
recently, the usual pathetic band of desperadoes have congregated
to take a pop at me.  The writer of the post has taken refuge behind
the convenient claim that I 'distorted and manipulated' what he was
saying, but, tellingly, fails to provide even one example.  Way to go,
that man!  That's because such claims are easy to make, but imposs-
ible to substantiate, as the merest glance at my rebuttal shows that
I comprehensively exposed the fragile foundation on which
his tenuous assertions were built.

From obsessing on a throwaway, humorous remark of mine
and categorizing it as a 'violent statement', to permitting deroga-
tory remarks from  a former Debenhams' employee (if anyone's
a 'nob', it's you, CS), it's nothing more than a love-fest between a
small bunch of deluded individuals devoted to a minor, short-lived
comic from 30 years ago.  The comic was second-rate back then,
and time hasn't altered its status one whit.  Strange that my small
group of obsessed detractors are all pals of one another, or
connected in some way.  Strange - and telling.

And isn't it odd that whenever they take against someone
who holds a different opinion to them, they never address the
subject, but instead try to dismiss their perceived opponent as
a 'troll'.  Are some people really that insecure?  Yup, seems like
it.  The fact that some of them try to submit sniping comments
to my blog on an almost daily basis (which I never publish, to
increase their vexation) reveals who the real trolls are.  An
irony that appears lost on them.

Right, let's get back to talking about comics.  Real
comics, I mean - not mere pretenders to the name.
Posted by Kid at Saturday, January 16, 2016

"Let me never fall into the vulgar mistake of thinking that I am being persecuted whenever I am contradicted." - Ralph Waldo Emerson

And I am unclear as to how you can be be a "troll" on your own blog. The term formerly meant posting irrelevant, off-topic, or belligerent comments on someone else's website, to disrupt a discussion or to provoke an argument. Now, it's become a vague epithet (like "racist," "Islamophobe," "homophobe," etc.) that apparently means, "Anyone who disagrees with me about anything."

What amazes me, TC, is that they appear on blogs I've visited (as you've seen for yourself), and say things like 'Ignore him, he's a troll!', seemingly not realizing that they're guilty of exactly what they falsely accuse me of. How can they not see it?

What does "violent statement" mean, is it to state something violently or is it just a convenient solecism to avert the risk of libel? Nice to know there's still time to engage in this kind of ribaldry, what with the pressing workload that such a thriving industry imposes.

Oh, the one you're thinking of was there stirring the pot, DSE, but 'twas another who used that particular phrase. All part of their determination to cast me in a bad light at every opportunity. Same few people every time.

There'll be exceptions of course, but, generally, Twitter is for twits.