HAMMY HOUDINI - HE DEFIED DEATH, BUT ONLY ONCE, ALAS... 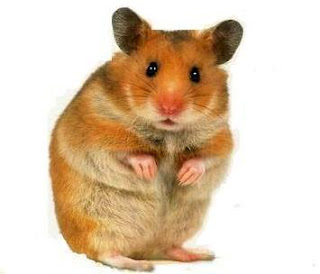 When I was - oh, I dunno - around ten I suppose, me and my
brother had a pet hamster called (you'll never guess) Hammy.
The name was  inevitable, both of us having grown up on TALES Of
The RIVERBANK, one of the WATCH WITH MOTHER TV shows
for kids.  Hammy had a cage which was sometimes kept in the kitchen,
sometimes in the garden cellar.  We would watch in rapt fascination as
he raced 'round his wheel for what seemed an absolute age, presum-
ably enjoying himself.  Now I realize it was probably out of
frustration and because he was 'stir-crazy'.

One day, my brother announced that Hammy was dead, and
with the morbid curiosity that most kids are heir to, we examined
the corpse.  Poor Hammy.  We tenderly wrapped him up in a brown
paper bag and gingerly laid him in the refuse bin in the back garden,
then retired back to the livingroom to mourn our departed pet.  But
then I had a sudden brainwave.  "Maybe he's only hibernating" I
speculated, so we retrieved Hammy from the bin and laid him
before the electric fire in an attempt to revive him.

Sure enough, after a while, Hammy came out of his state of
suspended animation and sniffed the air.  What a narrow escape
and no mistake.  I'm unsure as to  just how long Hammy was with us
after his Lazarus impersonation, but one day I noticed he was missing
from his cage in the cellar and a search of the confined space afforded
no joy.  Perhaps a week or so later, I found him dead in our watering
can (in the cellar), and even today I cringe in horror at the thought
of his despair as he waited for a rescue that never came.

I think this time we buried him in the garden instead of the
bin, but at least there was absolutely no doubt he was actually
dead.  No consolation of course, but thankfully he was spared the
awful fate of waking up as he was consigned to the grinding cogs
of a bin lorry and meeting, perhaps, an even worse fate than
the one which eventually claimed him.

Nearly 50 years later, I still think of Hammy on occasion,
and find myself hoping he didn't suffer too much or for too long.
Any Criv-ites out there ever have a childhood pet which they still
fondly remember today?  Resurrect them for a brief period by
telling us all about them in the comments section.
Posted by Kid at Thursday, January 14, 2016

It wasn't a childhood pet but I used to have a goldfish, his or possibly her name was Ajax. Ajax was the first goldfish or indeed the last, his predecessor was called Diabolik. Unfortuantly for Diabolic and his/her successor, who didn't live long enough to get a name, Ajax had the habit of beating his companions to death by swimming into them like a torpedo at high speed. Ajax lived for about 15 years I committed his/her corpse to plot in the garden. During that moment of contemplation, I reflected on upon Ajax's nature, the intolerance that should lead him/her to murder his fellow gold fish and thought, if the neighbour's cat craps in my vegetable plot once more, I'm gonna be emulating him.

We had a Manx cat (no tail) which was about a year or so older than me - he died when I was about ten and he's still the only pet I've ever had.

Ah, poor old Hammy. I have a slightly similar tale of childhood guilt. Like most youngsters, me and my mates liked to hang around the local ponds, trying to spot sticklebacks, frogs and toads. One day I decided to 'rescue' several newts from their natural habitat and take them home in a bucket. However, after watching them swim about in the bucket for a few days I figured it was time to set them free, and tipped the bucket over. Unfortunately, I did chose a particularly hot day during the summer holidays, and, to make matters worst, we didn't have a garden pond. Even to this day I still wonder how many of those little beggars managed to find some damp salvation and survive!

You've got me confused now, DSE. If Ajax was the first goldfish, how could Diabolic (and his/her successor) have preceded him? My head hurts. My neighbour's cat (and others craps in my garden, but it doesn't bother me. That's because the previous neighbour was a nightmare and my current one is a gentleman. I'd rather have a cat crap in my garden than a neighbour crap (figuratively-speaking) on my head.

I think it's time you got a new pet, CJ. How about a snail in a matchbox, or a pet potato? Something to keep you company. How about getting a family of pets? Y'know - head lice. You wouldn't have to feed them and you could take them with you everywhere you go.

The guilt never goes away, Scoop. Just imagine how bad you'd feel if you'd given them names.

I see your point kid it's not clear in my post, but there was a third goldfish, a successor to Diabolik as Ajax's companion. Sorry for hurting your head.

Don't worry, I took some aspirin.

Poor Hammy and Kid. Last year we lost one of our chinchillas. It was 13! My son got him when he was 10 so it was quite traumatic. She stopped eating we gave her intravenous fluids but she got pneumonia and even with oxygen couldn't breathe. We had to put her down. It was very sad.

The grief never completely goes away either, Phil.