You all know the story about IRON MAN's nose, don't you?  Apparently, on a visit to the MARVEL offices one day, STAN LEE was looking at some Iron Man pages of art and said something like "Shouldn't he have a nose?"  What he meant was that the headpiece looked too flat-faced, and that there should be some subtle contour to suggest that the Golden Avenger had a nose.

However, he was taken literally, and up went the cry, "Stan says give Iron Man a nose, so that's what we'll do!"  And that's how ol' Iron Britches got that awful-looking facial protuberance for however long it lasted.  I'm not sure whether this next part of the story is true or not, but, one day, Stan saw Chrome Dome's snitch and asked "What's that awful thing?"  Up went the cry, "Stan doesn't like Iron Man's nose - get rid of it!"  As Stan says, they probably wished he'd make up his mind, but that ugly snozzle was never what he'd meant in the first place.

When JACK KIRBY drew the iconic cover of issue #80, perhaps he drew the nose himself, perhaps it was added at the inking stage by AL MILGROM, I'm not sure. However, I never liked that nose, so by the use of computer magic, I've removed it, to reflect my own personal preference as regards Iron Man's facial features.  So whaddya think, Criv-ites?  Do you prefer the Gold and Crimson Gladiator with or without his '70s nostril nonsense?  Do tell! 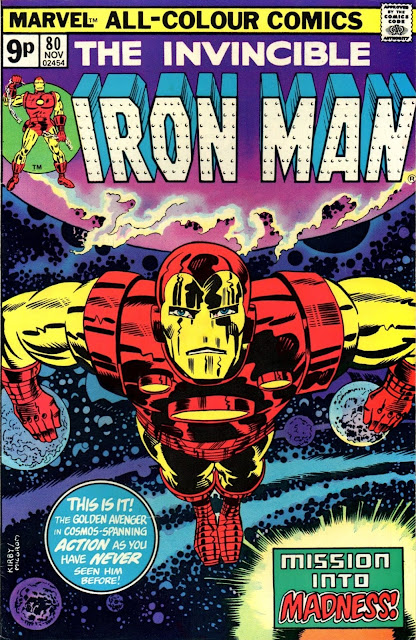 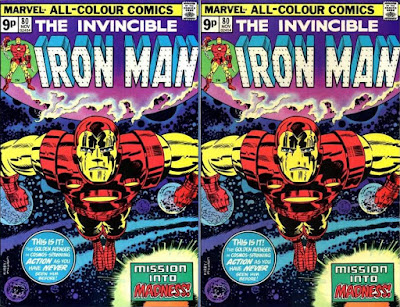 Not only was the nose ridiculous, but no IM outfit has ever matched the classic red and gold number that he's wearing on that cover.

Which version of that classic red and gold number 'though, BS? Ditko's, Heck's or Colan's?

That was one of the first Iron Man issues I bought and it was the cover that sold me. Your edit makes it look much better. I always hated the nose.

Yeah, G, it ruined a stack of IM covers and stories, that's for sure.

Who knows which is better? I guess it had to pass the smell test.

And once you get past the smell, you've got it licked!

I'd say the classic red and gold suit never looked better than in the late '70s/early '80s John Romita Jr/ Bob Layton period. And yes, the nose looked silly but the noseless mask must be really uncomfortable :D

I preferred the Colan and Tuska versions. The noseless mask wouldn't have been uncomfortable, CJ, because there was room for his nose as the mask/helmet didn't sit flat against his face.

This cover made me buy the cover- the wacky Kozmic parallel world story inside left me cold although Firebrand was quite dynamic.

I know Kirby's Marvel period wasn't popular with many but what if he had taken over Iron Man rather than Cap? It might have been more interesting than the next few years of Bill Mantlo riffing on Archie Goodwin's creations.

When Kirby returned to Marvel, none of the books he worked on seemed fully incorporated into the Marvel Universe. Even Cap and the Panther seemed to operate in isolation from the rest of it, despite a nod to generic S.H.I.E.L.D. agents on occasion. So it might have been interesting if he'd worked on Iron Man, but ultimately unsatisfying, I think.

The nose never looked right to me from day one, so I'm glad they eventually got rid of it.