"THE WARLORD & THE WITCH!" PART TWENTY-EIGHT OF FAVOURITE COMICS OF THE PAST...

From the vast and vaunted vaults of Castel Crivens, comes yet another example of an original comic and its reprint.  This time 'round it's The AVENGERS (no longer mighty it would seem, according to the cover) #75, first acquired on holiday in Largs, unless I'm very much mistaken, in 1971.  (In fact, I also seem to recall getting #76 on that same holiday, come to think of it.)  Oh, but look - the Avengers have been restored to mightiness on the splash page.

You know, having just typed that, I also seem to associate the issue with CORSON'S, a local shop from which I bought a lot of U.S. comicbooks.  (It sometimes takes a while for my memory to warm up.)  So it may well have been #76 I bought in Largs, but, being a two part tale, my mind would've jumped back to when I read #75, hence my connecting the earlier issue with the same place I bought the later one.  The more I think of it, the more certain I am that I got #75 from Corson's in my home town, and #76 in Largs.  I can't be bothered retyping  it all though - so you'll just have to live with it.  (As if you care.)

Down below somewhere (4th image) is the 1981 reprint in MARVEL SUPER ACTION #36, but I can no longer recall exactly where I got it (Glasgow or Southsea/Portsmouth), though I'm pretty sure I bought it the year of release as I've had it for absolutely ages.  Once again, the reprint comes from the time Marvel had increased the page count in their mags, so it also included the double-page pin-up shown at the foot of the post.  I love comparing these type of mags and I'm reasonably sure that the rest of you do, too.  Why else would you put up with me?

(The above question doesn't really require a response if you were thinking of being rude, by the way.) 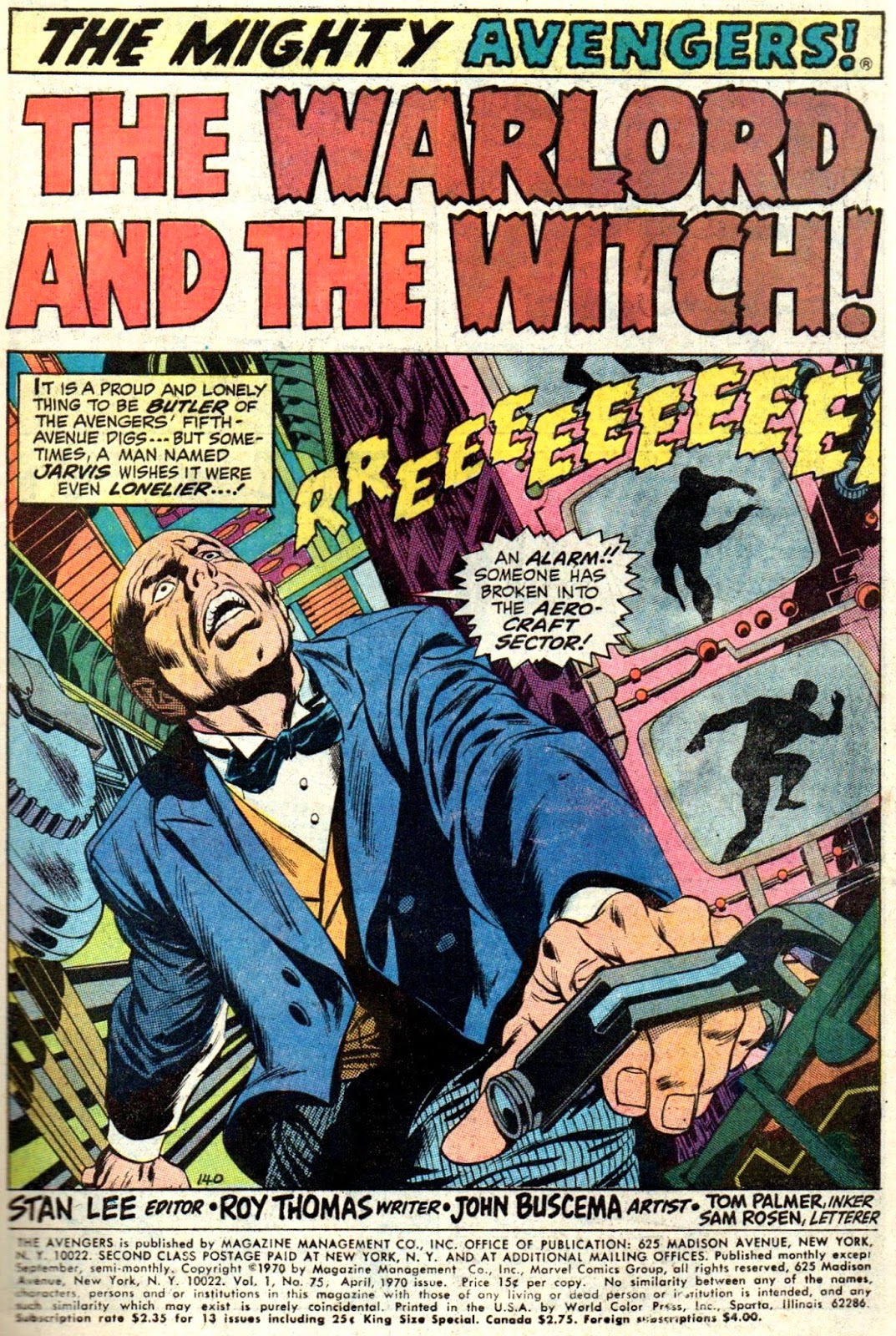 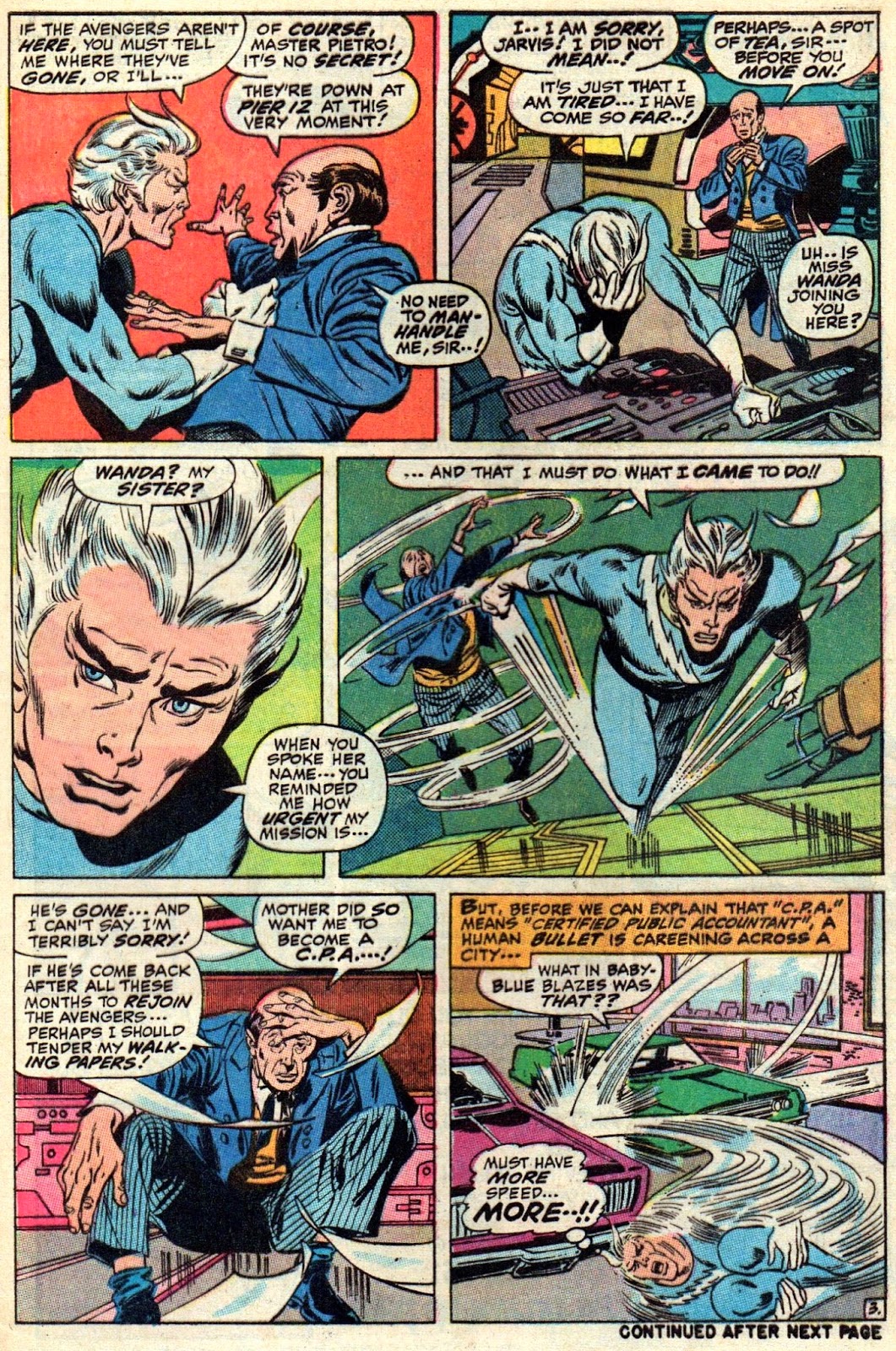 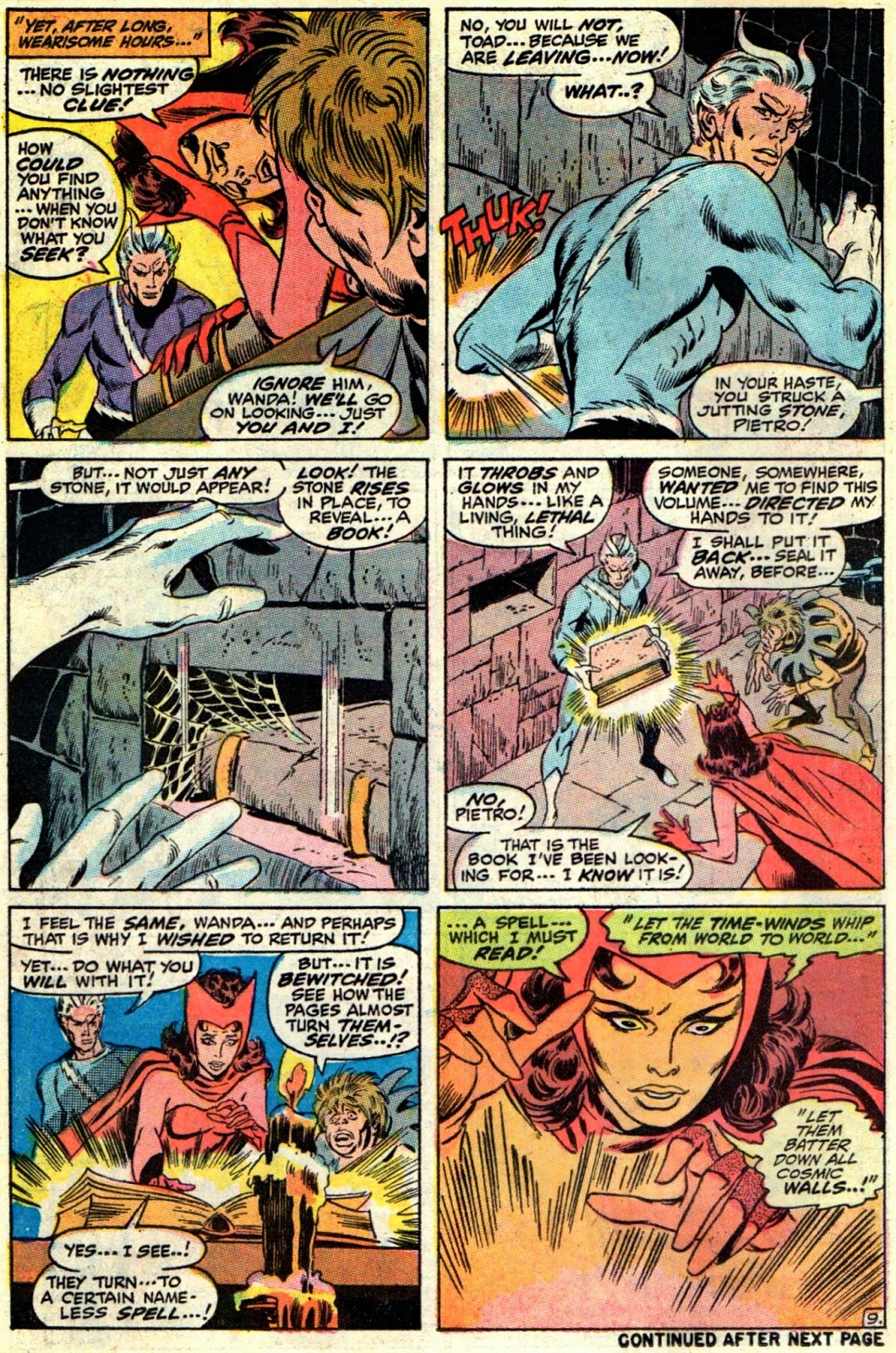 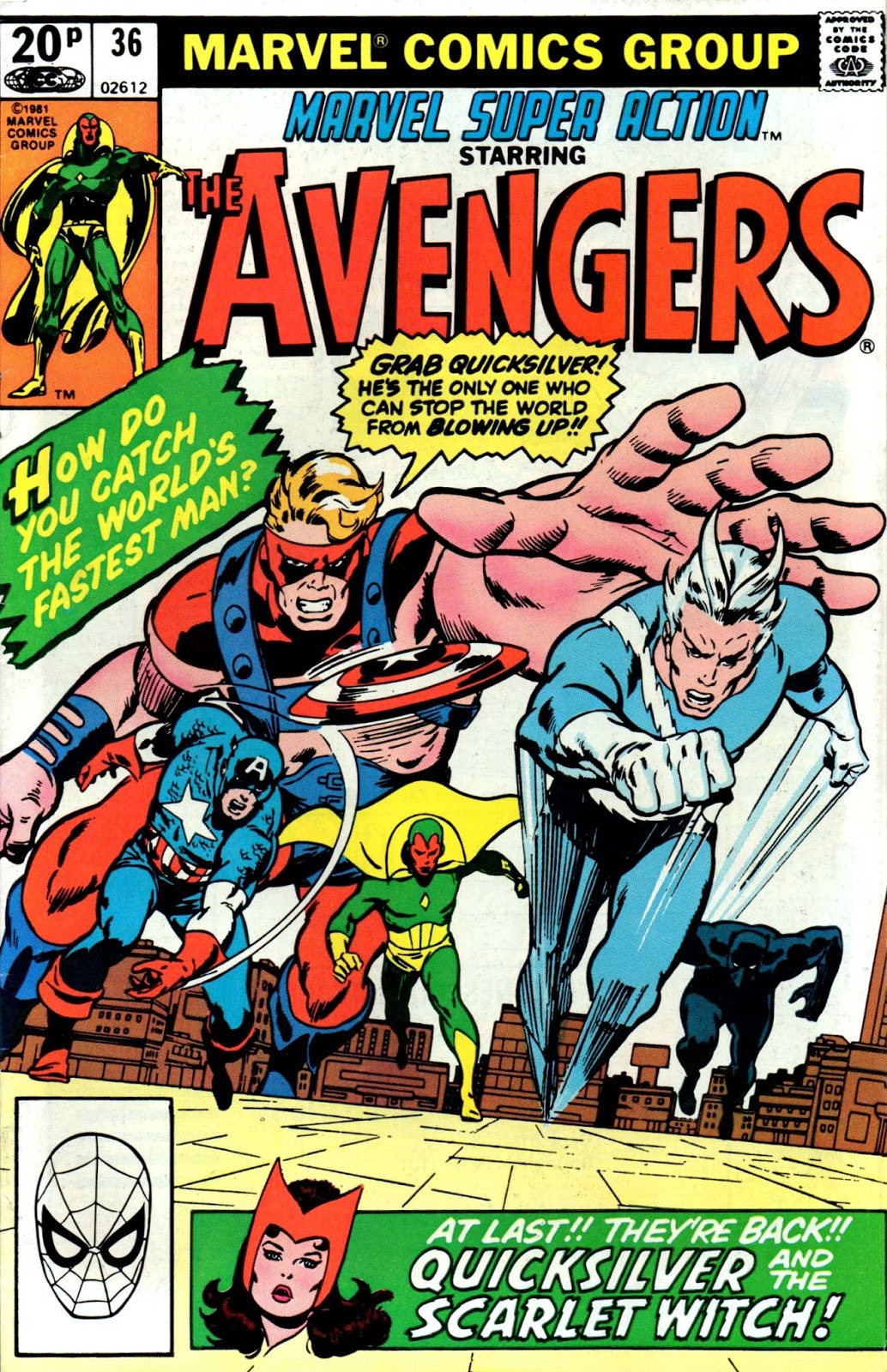 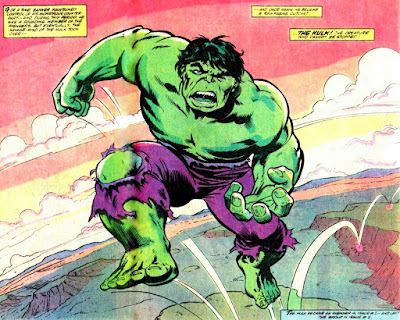 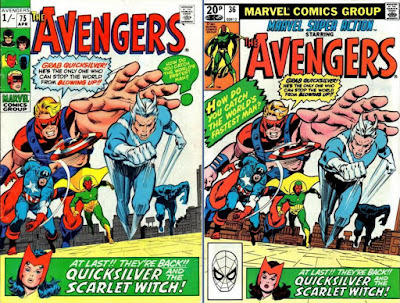 I'm not sure I can work out why they changed the tilt of the landscape on the second one; I think I prefer the original, with Pietro dead-on and coming straight at us. Just a subtle change, but it upsets the composition all the same.
At this time on the Avengers, Buscema and Palmer were a mighty team. Buscema had worked out the kinks from his earlier work on the title, particularly in regard to his figures, which were now beautifully proportioned; his women were as beautiful as any in comics; and Tom Palmer gave his work a sheen that no other inker quite managed to do.

Just wondering, Kid: who drew that Hulk page? At first I was thinking Trimpe or Severin, but the two small panels suggest Rich Buckler.

They changed the tilt to accommodate the bar code box without obscuring Cap's feet - simple as that, it seems to me, GB. As for the hulk pages, that's a tougher one. If it is by Rich Buckler, it'll have a mix of different styles, as was his wont back then, so that confuses my Spider-sense. It could be Buckler, but it could also be by Sal Buscema or Keith Pollard, but I just don't know is the honest answer. Where's Nifty Nick Caputo when you need him? He usually knows these things.

And here's me naively thinking that they made the change for artistic reasons.

It was the Bruce Banner figure at the top which made me think of Buckler—like a cross between Adams and Buscema.

That original masthead is still the best one in my opinion and this period of the Avengers is the gold standard version with John Buscema the ultimate Avengers artist. I also have fond memories of his brother's art as it reminds me of reading The Avengers and The Savage Sword of Conan in '76.

The team lost a bit of the magic (just a bit) when Palmer started finishing Buscema's looser pencils, but at this early stage it's certainly full pencils with the magic glow that Palmer could impart. Fantastic!

And the gloriously blowhard Arkon too!

Well, GB, not obscuring part of the art is artistic reason enough - in a practical kind of way. That Banner figure isn't as well drawn as the rest of the piece, to my eyes.

It was a golden time for the team sure enough, CJ.

Buscema and Palmer - an unbeatable team, eh, Rip? Right up there with the best of them.