JACK KIRBY was back - and The ETERNALS were with him!  Unfortunately, the comics buying public weren't - at least in any great numbers, as the mag folded after 19 issues and one Annual.  Similar to the theories of ERICH VON DANIKEN, the premise also echoed elements of DC COMICS' earlier NEW GODS, in that two races (The Eternals and The DEVIANTS) were at war with one another - with human beings caught in the middle.

It wasn't JK's worst moment, but neither was it his best.  At the time, readers could be forgiven for thinking events took place in a separate universe to MARVEL's, apart from a grudging nod in its direction by the use of generic S.H.I.E.L.D. agents and a 'cosmic-powered' HULK android.  Jack seemed to be doing his best to keep the MU at bay, and it was left to other hands to fully incorporate his concepts into the rest of the line once he'd left 'The House of Ideas' for the second and final time in his career.

Anyway, Jack Kirby's always worth a look, so let's start the ball rolling with the first ten covers of his longest-lasting 1970s (new) mag for the place he'd helped build, but seemingly no longer had room to accommodate either him or his unique talents. 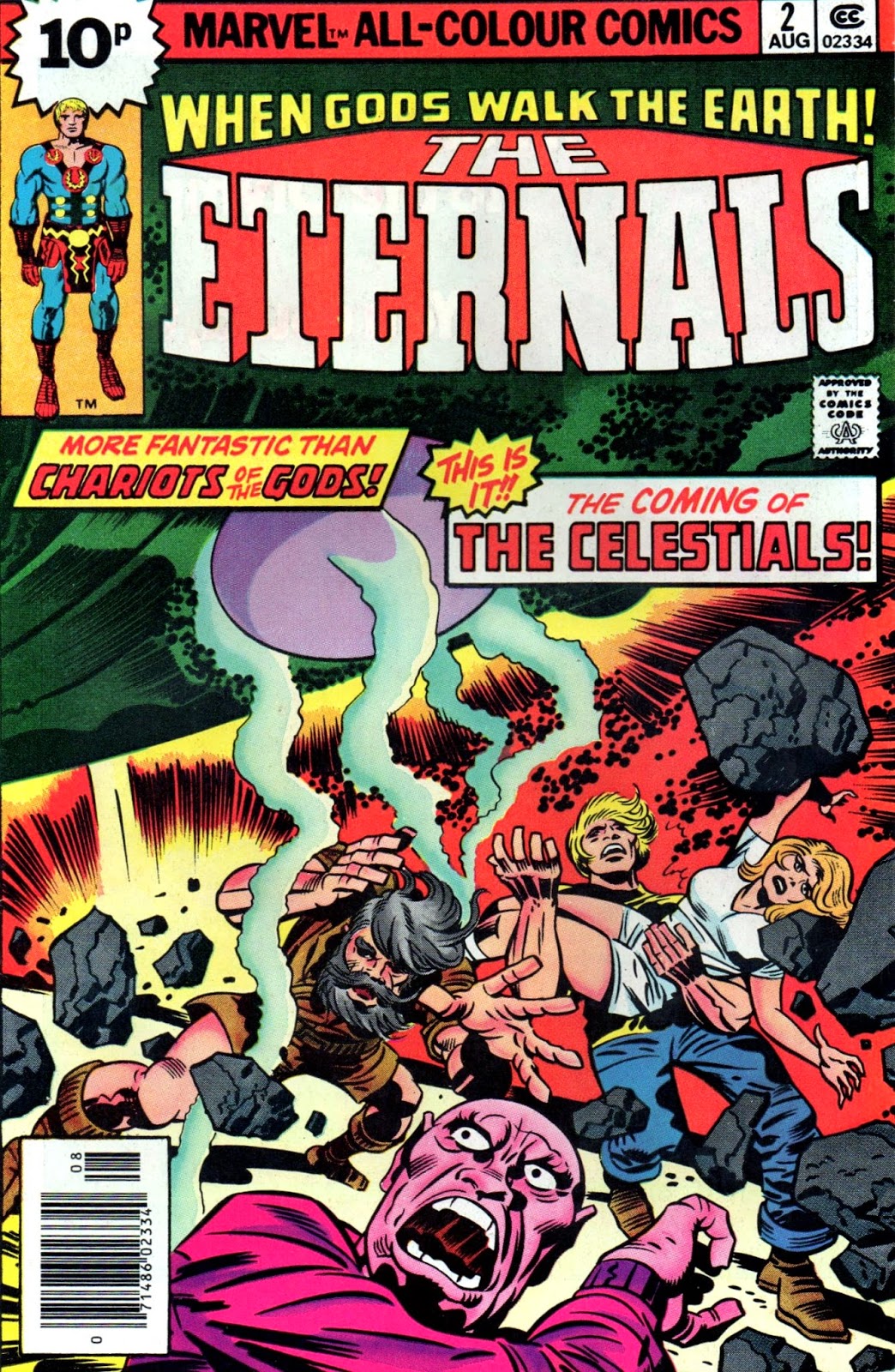 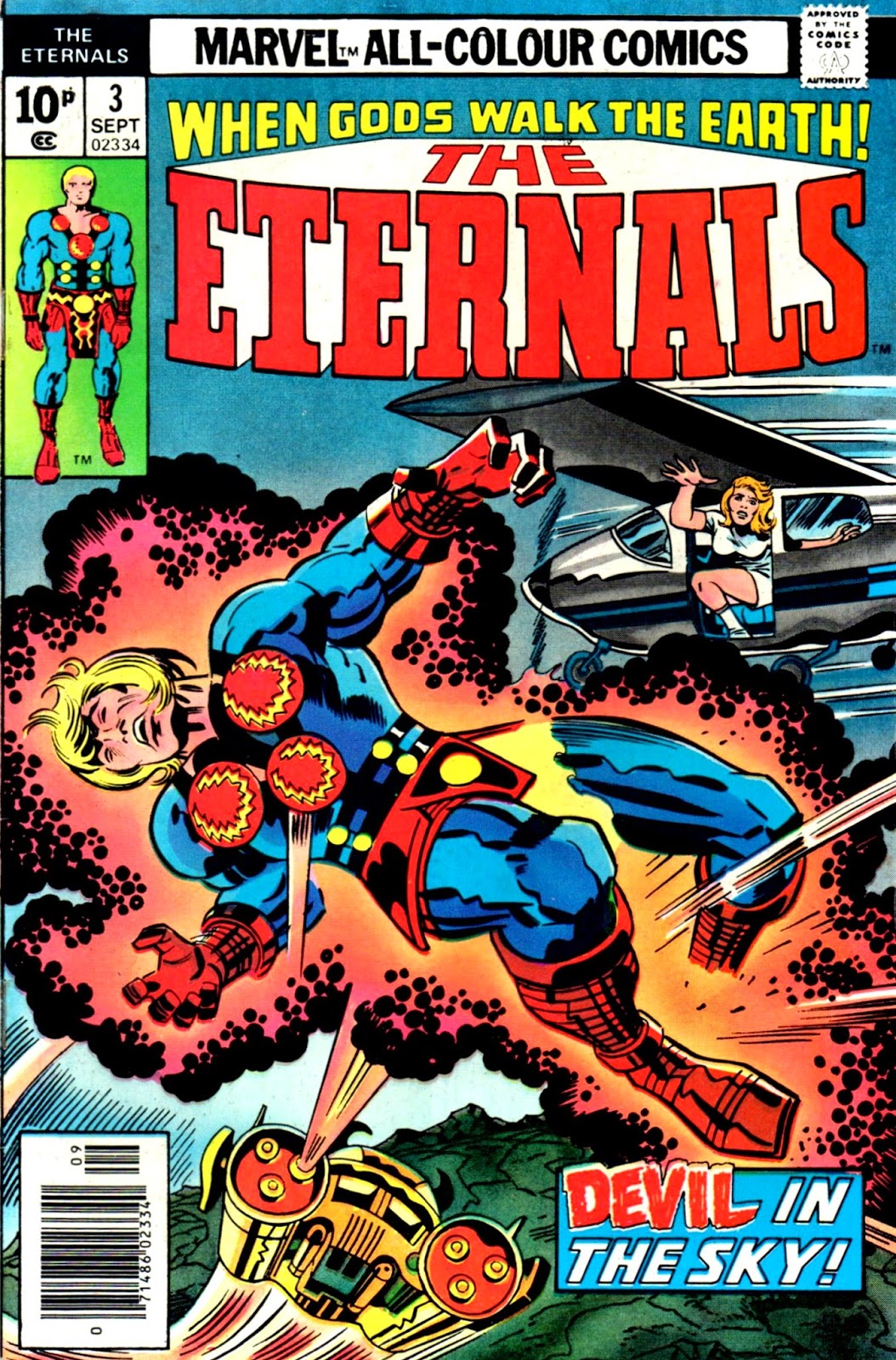 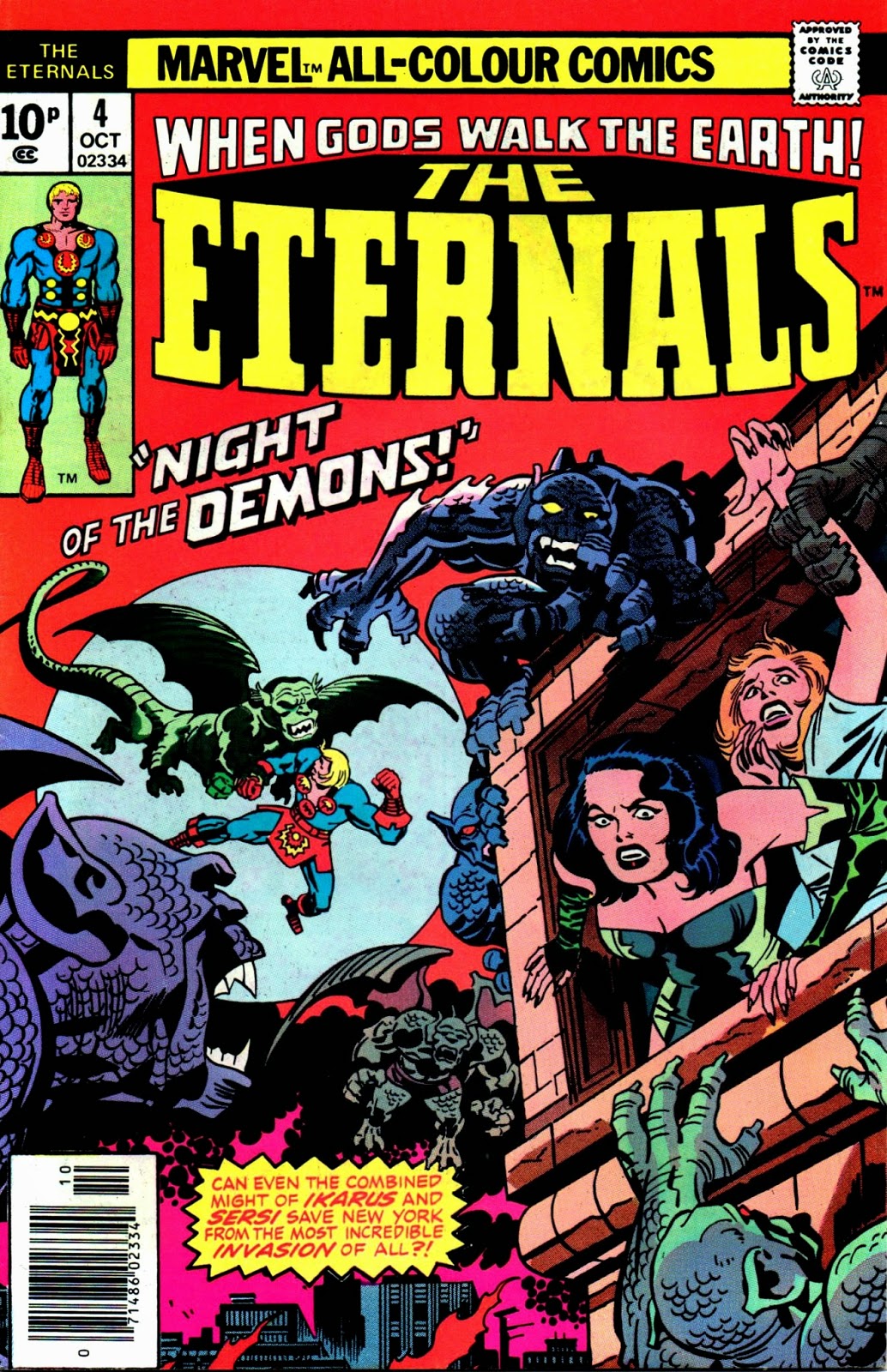 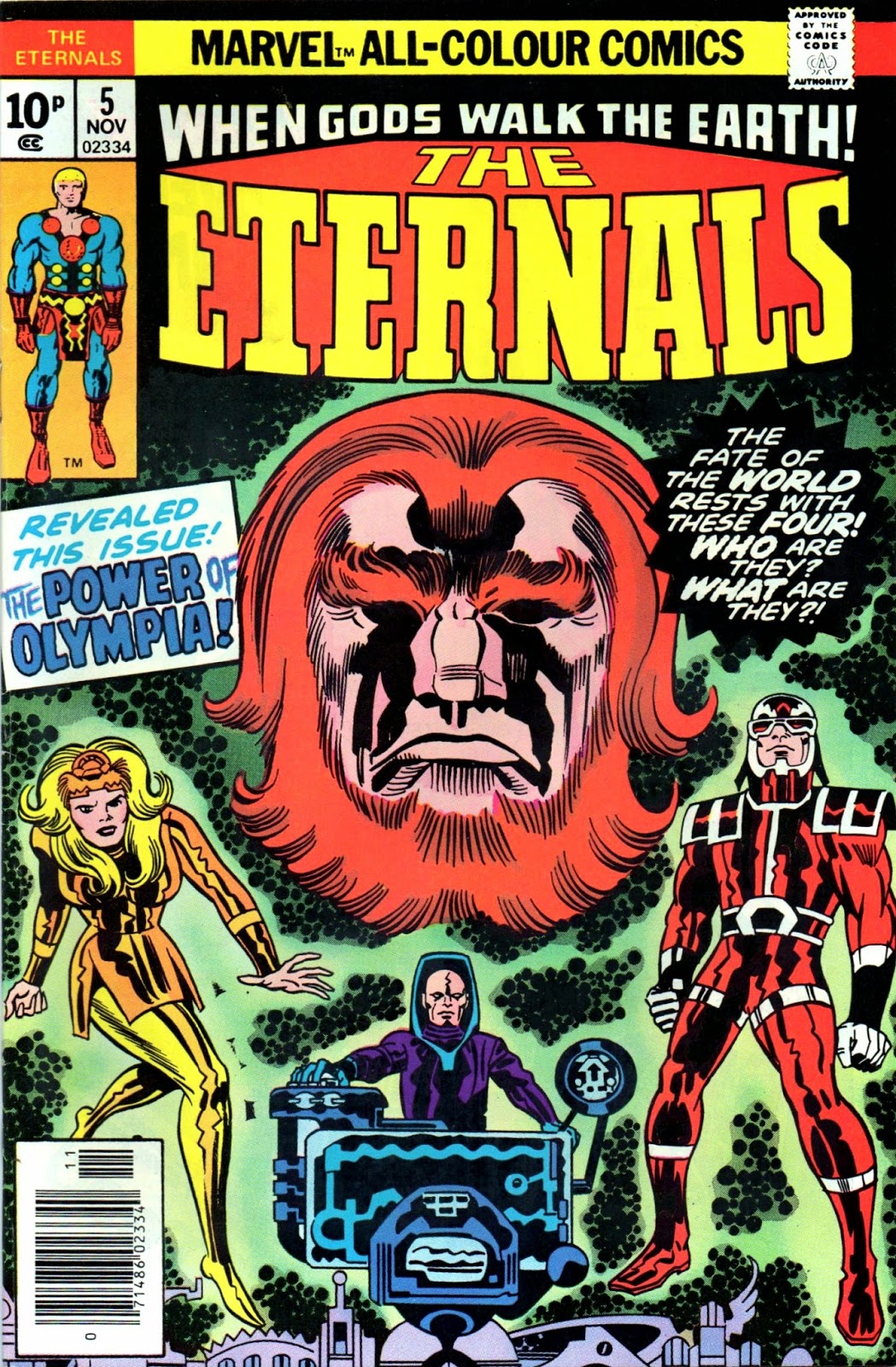 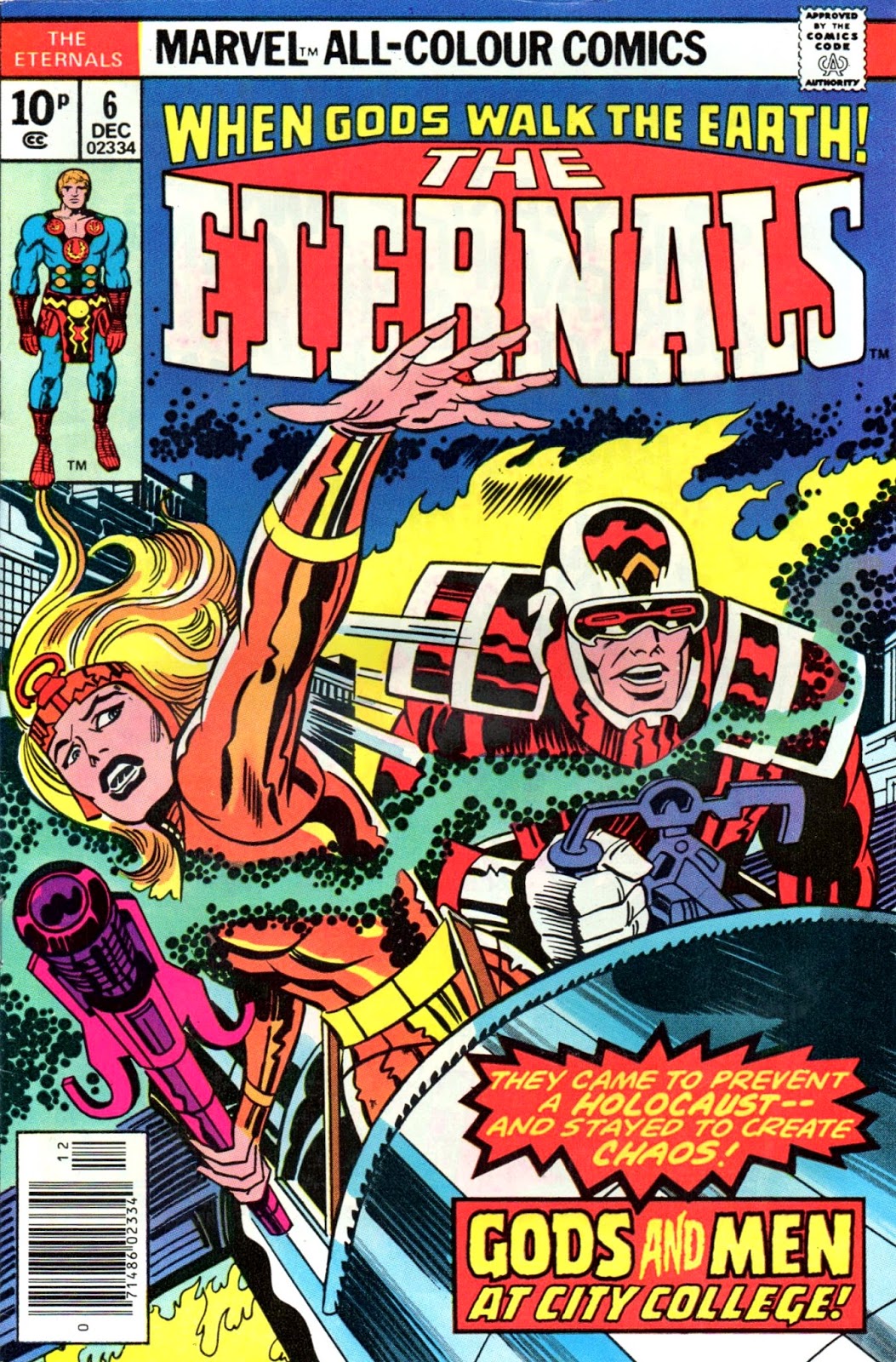 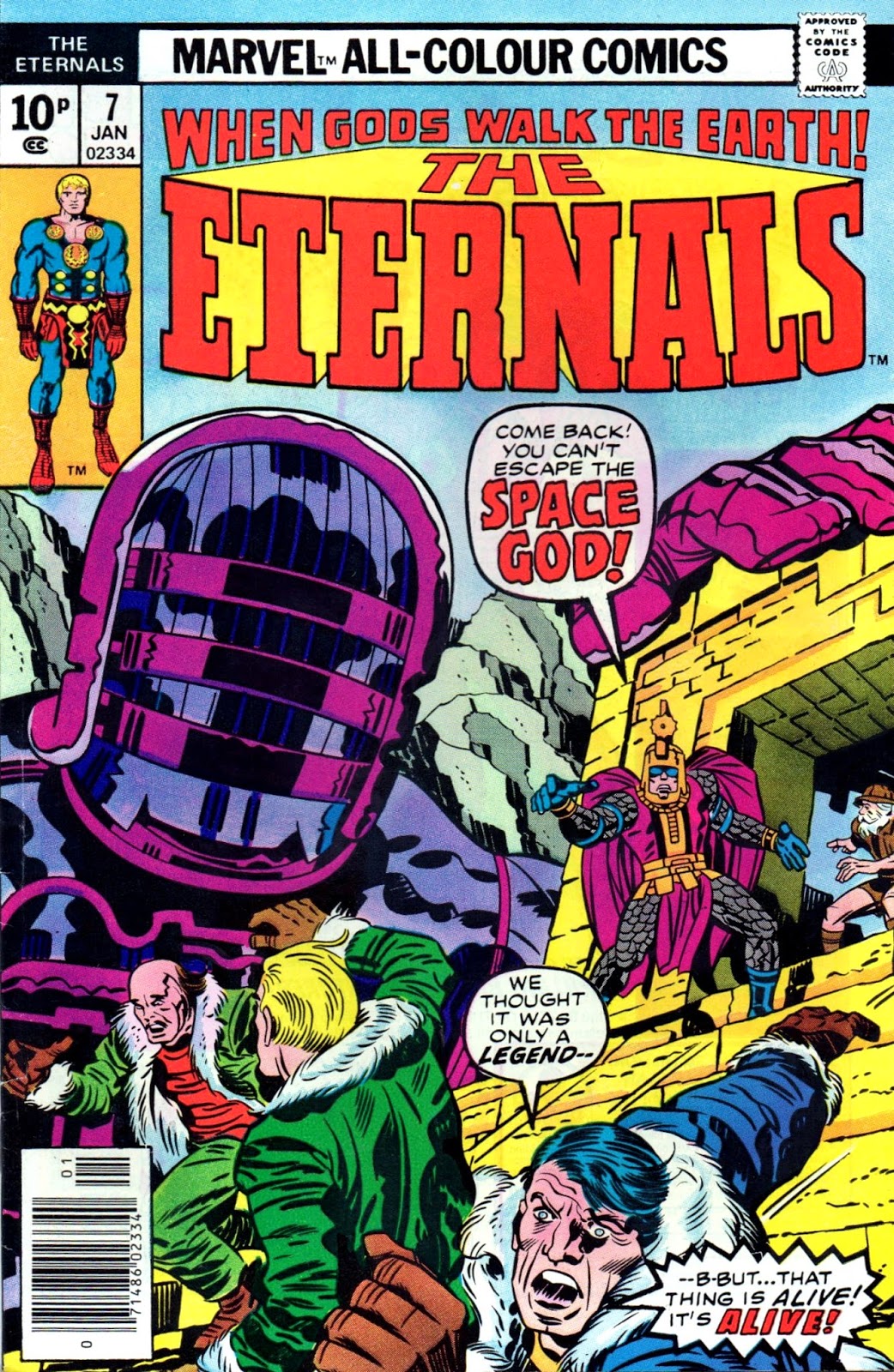 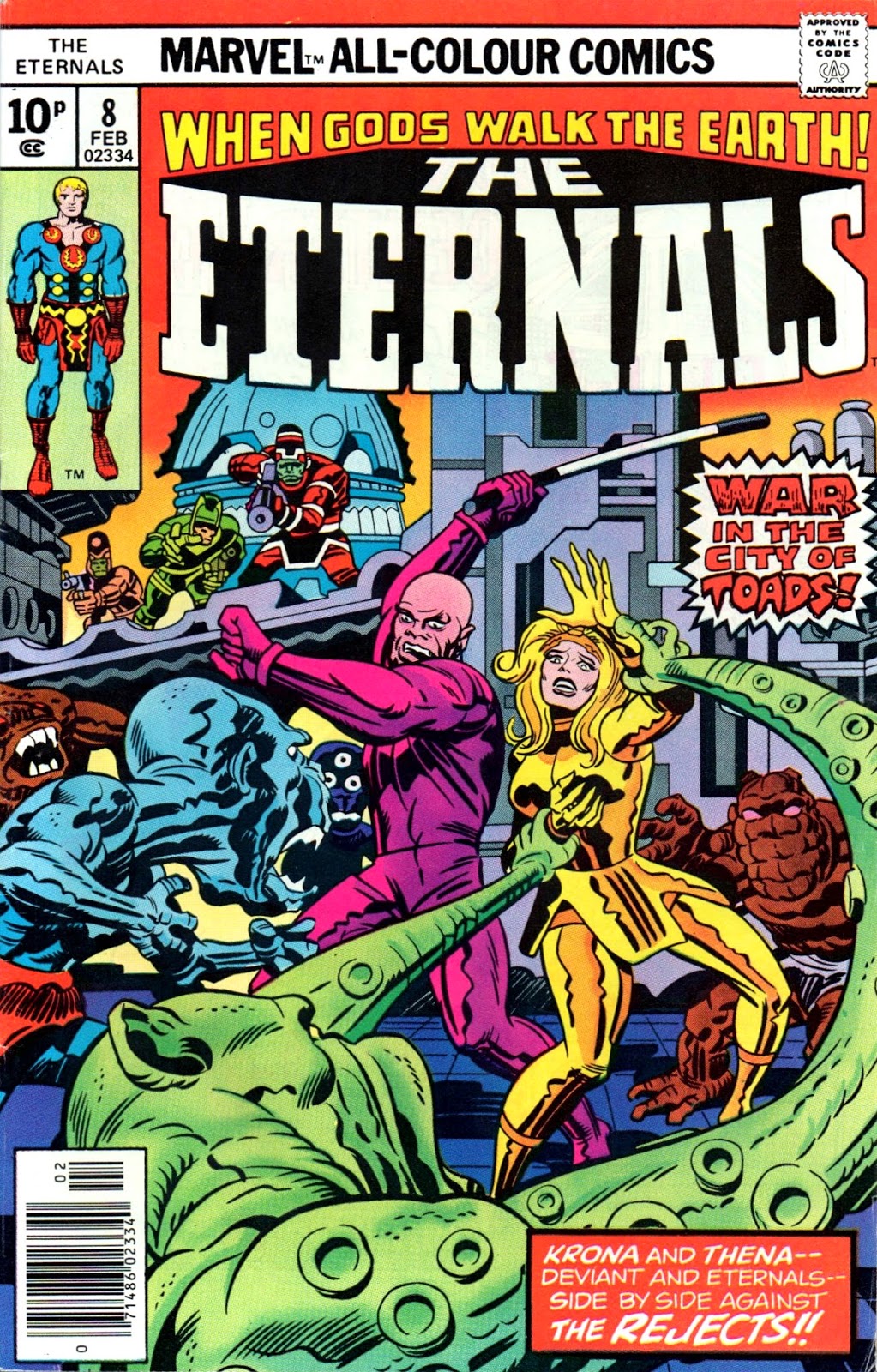 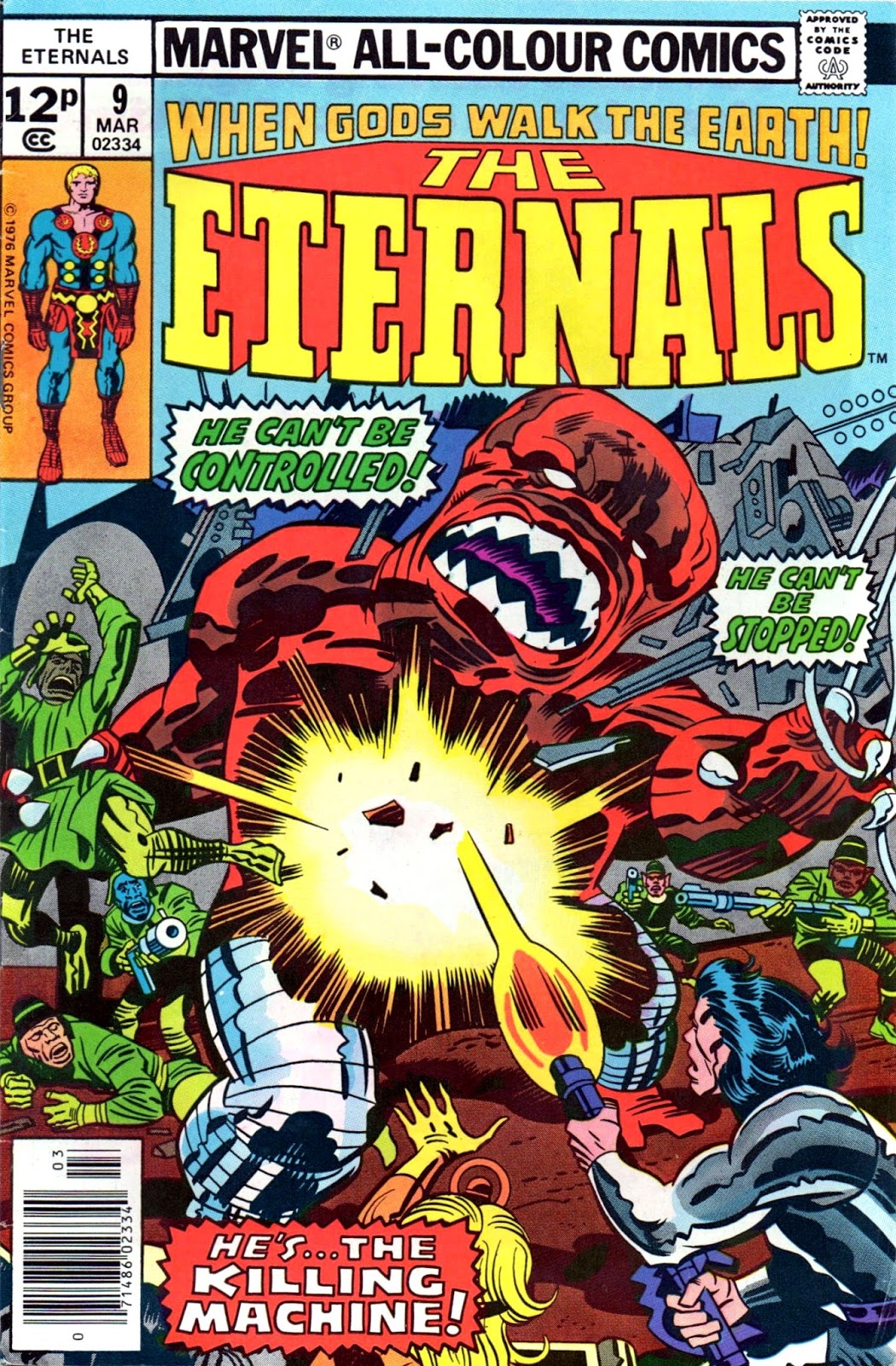 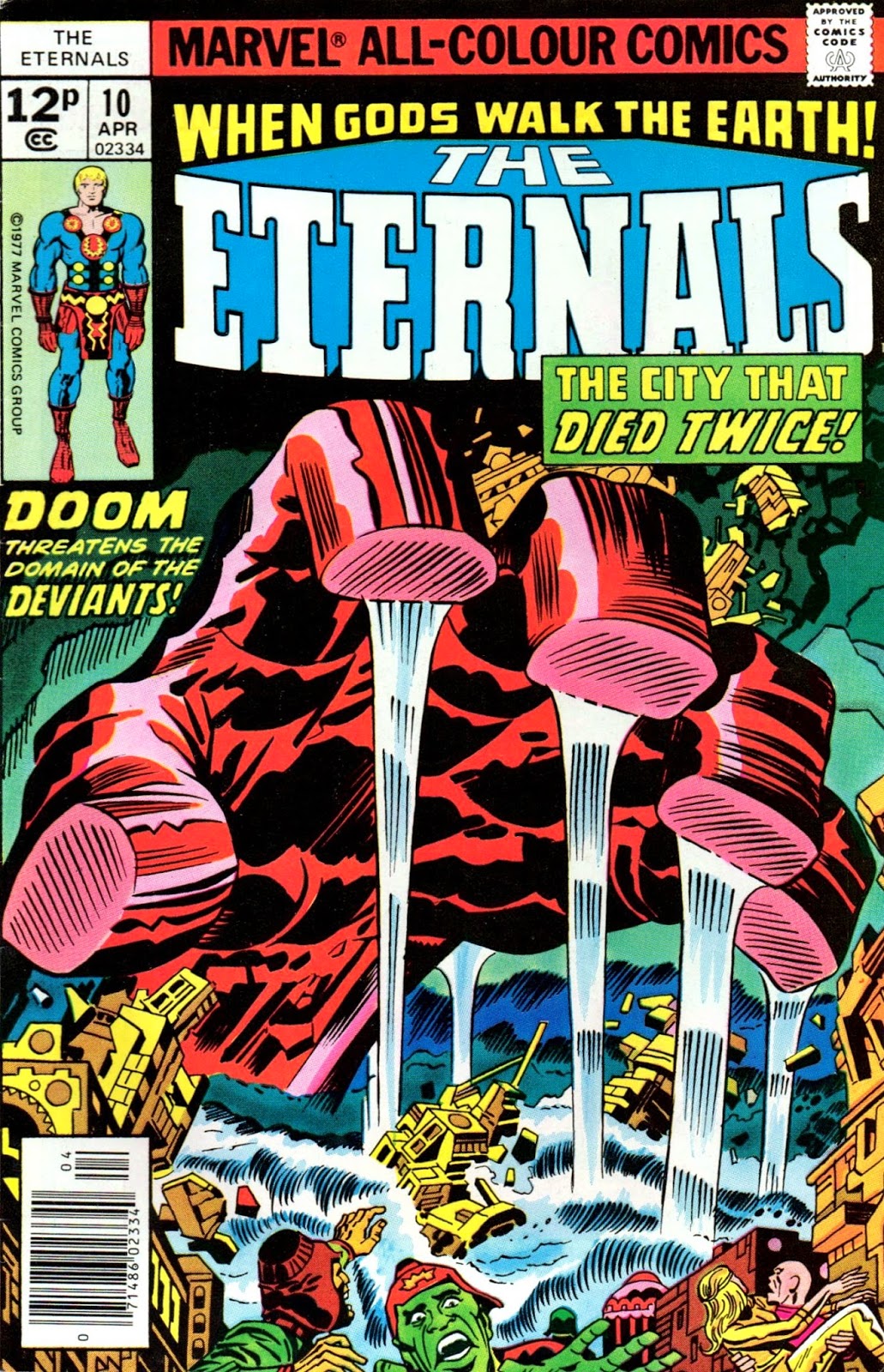 I bought the first three issues via mail order in about 1981 so a good five years after they came out. They were rather odd but they were Jack Kirby and I was a huge Kirby fan in those days. By coincidence Eternals #1 is dated July 1976 which is the exact month that I first bought U.S. Marvel comics - I was on a school trip and saw all these Marvel comics that were similar to the UK Marvel weeklies but IN COLOUR !!! So I bought about ten all at once but The Eternals definitely wasn't one of them - Conan the Barbarian #63 is the only one of them I can remember with certainty. Buying ten Marvel comics all at once these days would cost a fortune, Kid !

I bought the first four issues at the time they came out, but didn't acquire the remainder until the late '80s or early '90s. It's funny looking at those four now and thinking how old they are - it seems like only a few months ago since I bought them.

As for the price of comics these days - ten would set you back between £30-£40. Sheesh!

It was '81 when I picked up one copy to try too, but it didn't take long for me to realize that " it wasn't really my bag, baby!" Great "Kovers" though, as you'd expect.
Did anyone ever read any Pacific Captain Victory? I didn't and I'm curious to know what they were like.

I bought at least the first three issues, JP. I'll do a post on them soon.

Cheers, Kid, look forward to that one with much interest!

I'm well in the minority here as I loved Kirby's Eternals comics (for me much better than New Gods) I also really like his Black Panther comic at this time (others hated it then but think ts gettign recognition now , quirky but cool)but that was aobut it do me with Kirby at this time, Sadly his return to Capt America wasn't for me (fed up with Nazis) and 2001 and Devil Dinosaur were just too weird .

His art was becoming just too abstract for me, McScotty, and nowhere near as good as his earlier work. I've heard it said that he refused to work on FF and Thor (apart from covers), but I sometimes wonder if he was ever actually offered them upon his return. It would be interesting to know. He never produced what you could call a 'bad' comic, but some were sure better than others.

I was firtunate enough to buy issue 1 in Strathaven but thanks to the demons of distribution I only got issues 3, 6 and 8 over the following months.

I can remember the impact of the first issue but I think I was disappointed that it wasn't more like New Gods. Of course, I was four years older ( a young teenager) so I wasn't the same person any more either.

Ultimately, anchoring the Eternals in the Marvel Universe was a bad idea although I may be one of the very few people who liked Gilagamesh in the Avengers. The MU was overpopulated with hidden races and the significance of the Eternals were lost amongst them.

Interestingly, Dougie, I re-read Annual #1 (and only) a couple of days back and I had to do it in two instalments - it was so utterly boring to read it really was a chore. If only Jack had appreciated Stan in the same way that Stan had appreciated Jack, then the readers might have had something worth reading in Jack's later efforts.

The owner of a local comic shop once gave me a copy of Eternals #1 as a gift. He had a couple of boxes full, having ordered more than usual because he had expected a new series by The King to sell like hotcakes. Evidently, it didn't.

I had one issue each of Captain Victory and Silver Star. For some reason, I could never get interested in either of them, and I'm not sure why.

I was OK with Kirby's later "abstract" style on larger-than-life strips (science fiction, super heroes). I didn't care for it in more realistic genres, like war stories (e.g., the Losers). But that's just a matter of personal taste.

My impression is that the Eternals title was originally supposed to be a stand-alone series, not part of the MU. By 1980 or so, it seemed to have become official policy that every Marvel title had to tie in with every other Marvel title, so that long arc in Thor (that climaxed in #300) integrated them with the super heroes' universe.

I think you're right, TC, in that I don't think Jack intended the series to be part of the MU, but saw it as a stand-alone saga in the 'real' world. However, as he'd been a co-creator of the original MU, later writers seemed to feel obliged to tie the two of them together (probably out of a sense of respect for him) - even if it just led to making things more complicated.