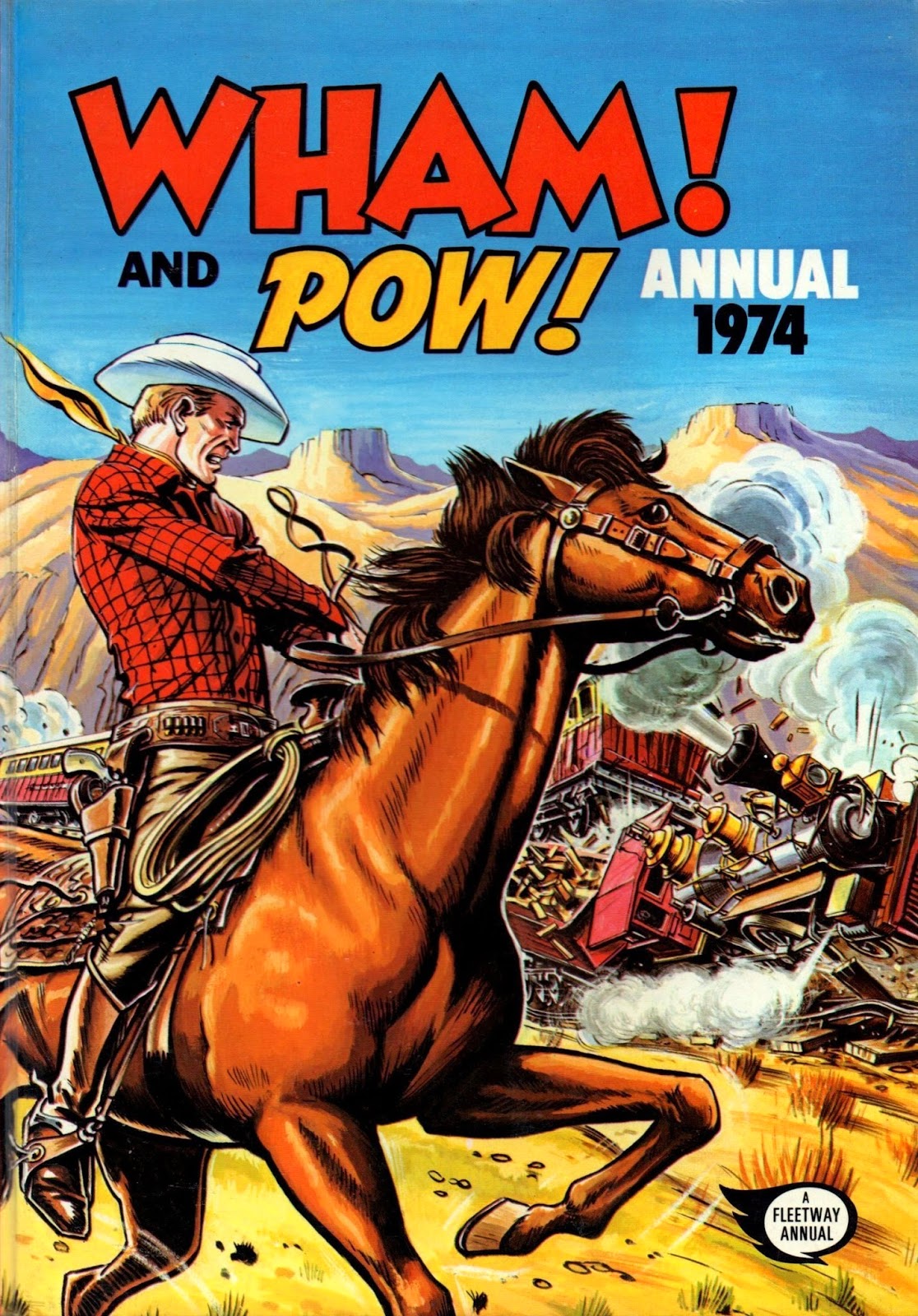 WHAM! & POW! Annual 1974 is a curious entry in the world
of yearly book publishing for kids.  Firstly, Wham! had only just managed
to get one issue over the doorstep of 1968 before merging with Pow!, and
secondly, Pow! itself merged with SMASH! only eight months later.  So,
both weekly titles had been extinct for around five years when the
Annual for 1974 made its debut in newsagents in '73.

However, that's not what makes it a 'curious entry', because
previous Annuals for both comics had been issued in the wake of their
demise.  There were Wham! Annuals for '69-'72, although the contents of
the last one bore no relation to the weekly it represented, and Pow!, too,
had Annuals for the years '69-'72, the last two again failing to include any
content recognisable to former readers of the weekly.  As the '71 Annual
still bore the name of ODHAMS as publisher, the absence of
familiar strips was even more of a mystery.

However, all the books issued after the demise of the comics
retained the same masthead design of their weekly counterparts - apart
from the Wham! & Pow! one for 1974, which had new versions (although
they retained something of the spirit of the originals).  Surprisingly, the book
featured strips of characters that had actually appeared in the weeklies, so
the tweaking of the masthead design seems odd under the circumstances -
especially as the previous combined book for 1973 sported the
original logos, but no familiar content.

As well as filler material from other sources, the 1974 book
had SAMMY SHRINK, FOOTSIE The CLOWN, GEORGIE'S
GERMS, PEST Of The WEST, BABY WHAMSTER, KICKS, The
CLOAK, and The TWO FACES Of JANUS.  I'm left to wonder why the
Annual should return to its roots so long after abandoning them.  Had IPC
perhaps received complaints from buyers of some of the previous Annuals
who'd been disappointed by the absence of their once-favourite strips?
It makes sense, in that former readers who bought the books would
surely expect to see characters they knew, not strangers.

When I freelanced for IPC, they had a policy regarding reprints
that meant they wouldn't re-use a strip until it was at least five years old.
(I think this was later changed to three.)  As the '74 Annual was all reprint
(as far as I'm aware), this would explain the presence of the strips included
therein, as they were now eligible for reprinting.  Perhaps IPC had decided
that this was going to be the 'last gasp' for Wham! and Pow! and they
wanted to draw things to a close as they'd began - with strips that
actually represented the two comics at their finest.

Unfortunately, I can't scan the interiors without cracking
the spine, apart from these two colour pages at the end of the book
(by CAPTAIN PUGWASH creator JOHN RYAN).  Ironic, eh?  The
only strip I can show you isn't one that summons the spirit of what
either comic was actually like. 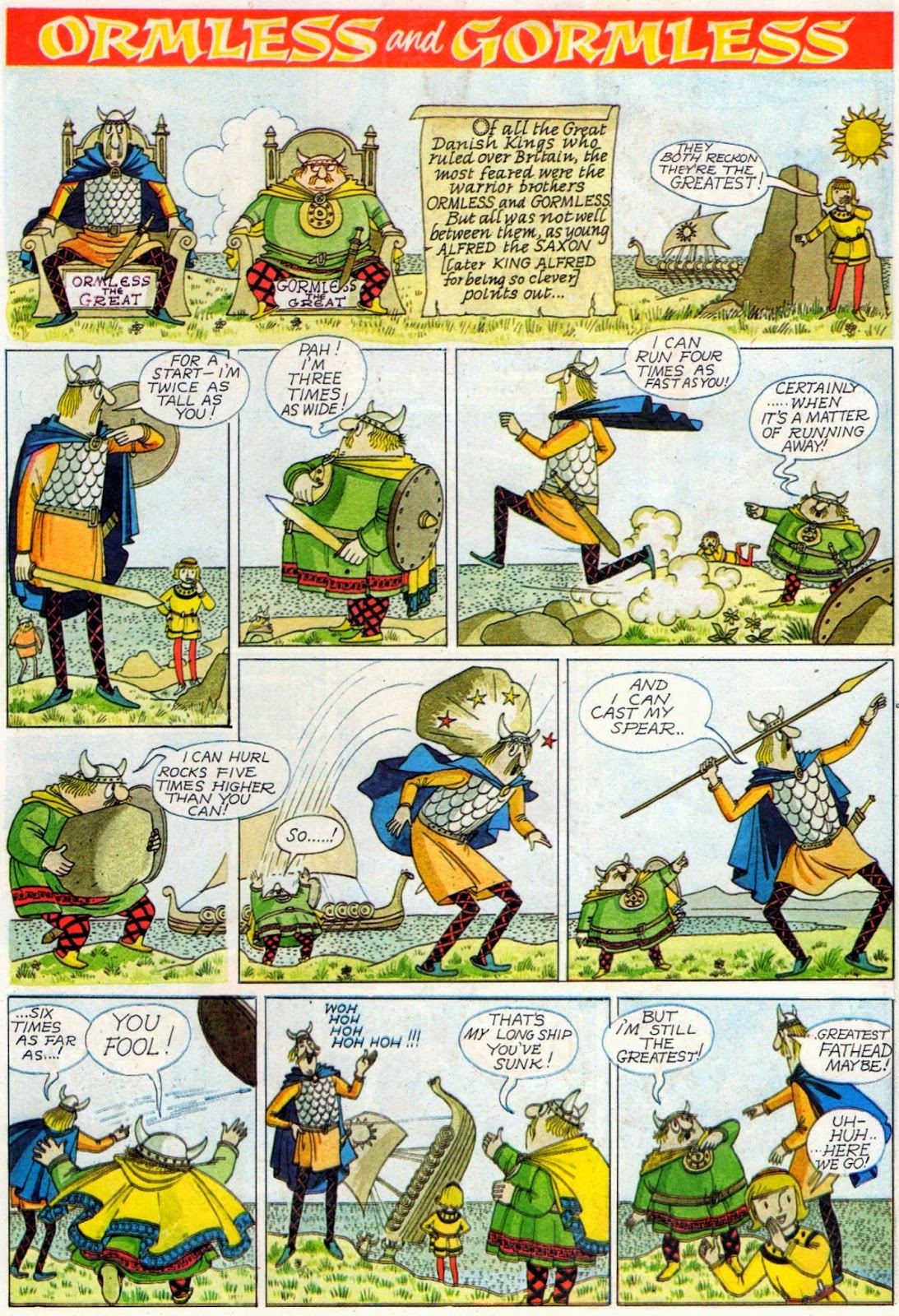 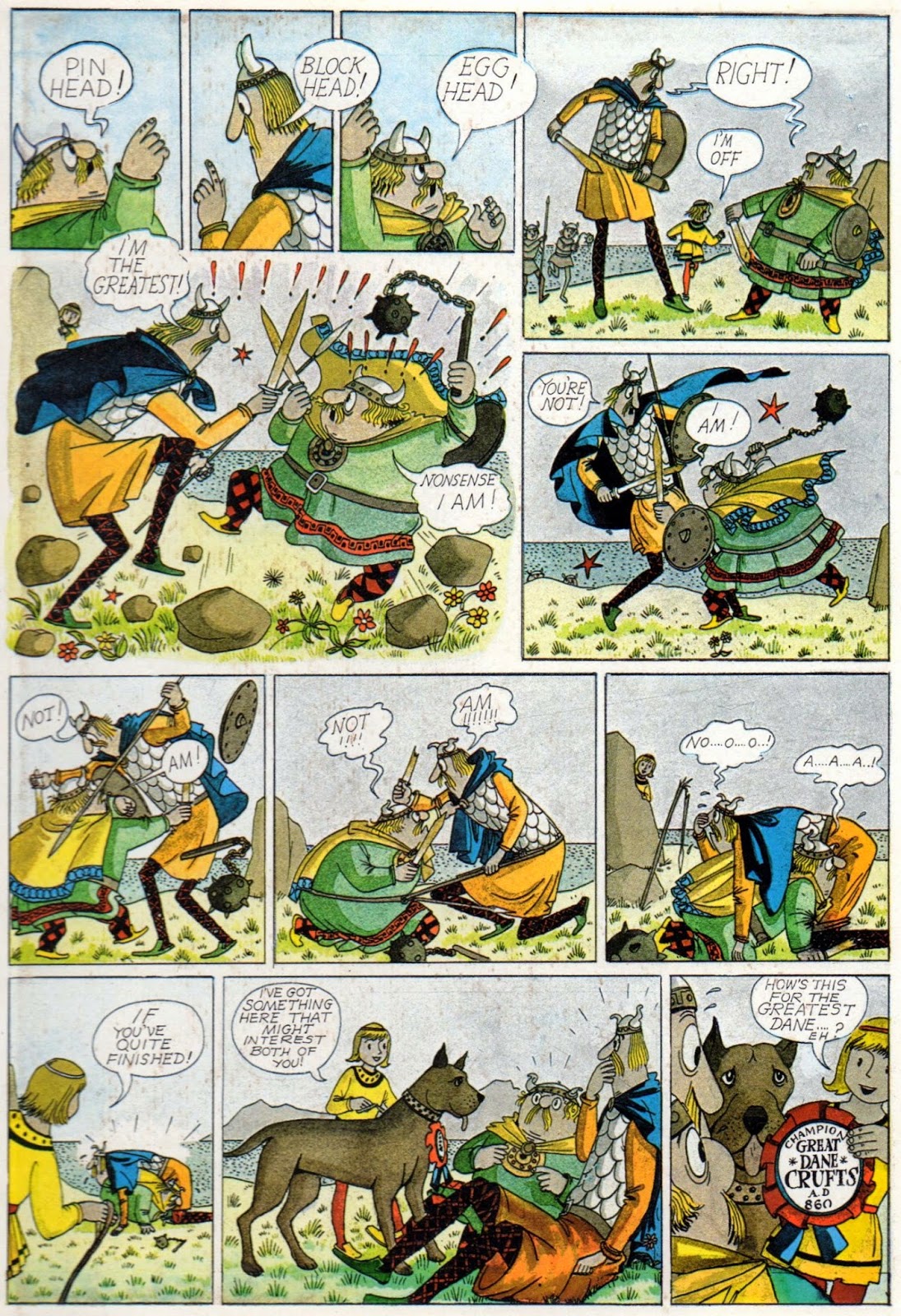 That's a pretty nice strip by John Ryan wasn't aware he drew comics - strange story indeed re the contents cover looks like a traditional Fleetway book with Odhams content possibly as Fleetway had the rights to these old strips by then and had a back catalogue of them to use perhaps?? - Actually have there been many annuals that was a combination of two pre existing titles in one book (not counting Whizzer and Chips or best of Dandy Beano etc )

Paul Ryan drew quite a number of strips for various publishers over the years, McScotty. Captain Pugwash first appeared as a strip in Eagle #1 (for about 3 months) and he also drew Harris Tweed (reprinted in the W&P Annuals for '73 & '74 as Bulldog Breed) for the same comic. Regarding your query, as far as I'm aware, Wham! & Pow! were the only two comics issued in a combined Annual, but there may be others I don't know of. Yes, IPC had the rights to Odhams strips, but it's strange that they suddenly started using strips associated with the comics for the '74 book, but not the '73. (Or the '72 Wham! Annual or the '71 & '72 Pow! Annuals.)