It was in the VIRGIN MEGASTORE in Glasgow where I first laid eyes on the first issue of a brand-new comic by a brand-new publisher in 1981.  I just loved the splash page (aside from that seriously dodgy left shoulder and the underwhelming mast-head), as there was just something about the colouring that reminded me of MARVEL mags from the 1960s.  Unfortunately, the series never really grabbed me - it was Kirby on autopilot doing just another riff on things he'd done before.  I bought the first three issues (I think I got #3 a little while after it had come out, if I recall correctly) and later bought the 1983 Special Edition a year or two after it was released.

CAPTAIN VICTORY & The GALACTIC RANGERS lasted thirteen issues and one special between 1981-'84.  It failed to set the comics world on fire, like so many of Jack's post-Marvel comicbooks, proving to many that STAN LEE was not just an important factor, but also an essential one in Kirby's success at the 'House of Ideas' during his first tenure there in the '60s.  Interestingly, in Cap's final issue (#13), it was strongly indicated that he was the son of ORION Of The NEW GODS.  Given that the new gods had arisen from the twilight of the old (Asgardian) gods, it suggests that Kirby had a predilection for keeping things connected.

Anyway, Crivvies, here's a brief look at several images from the first couple of issues.  Unfortunately, the margin of a name and address label (mine) obscures a small part of the art on the left-hand lower corners of the back pages, but hopefully it won't upset you too much. 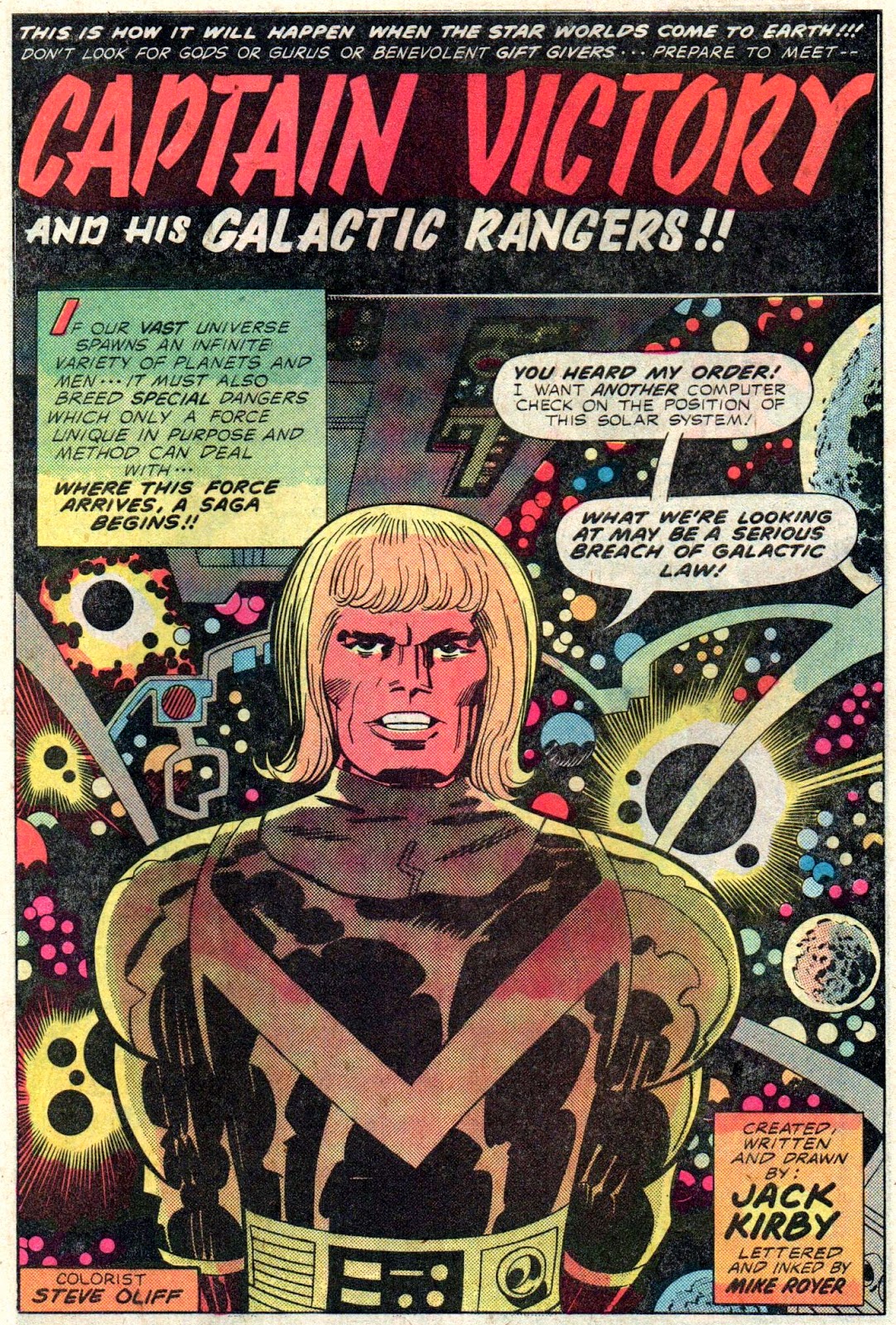 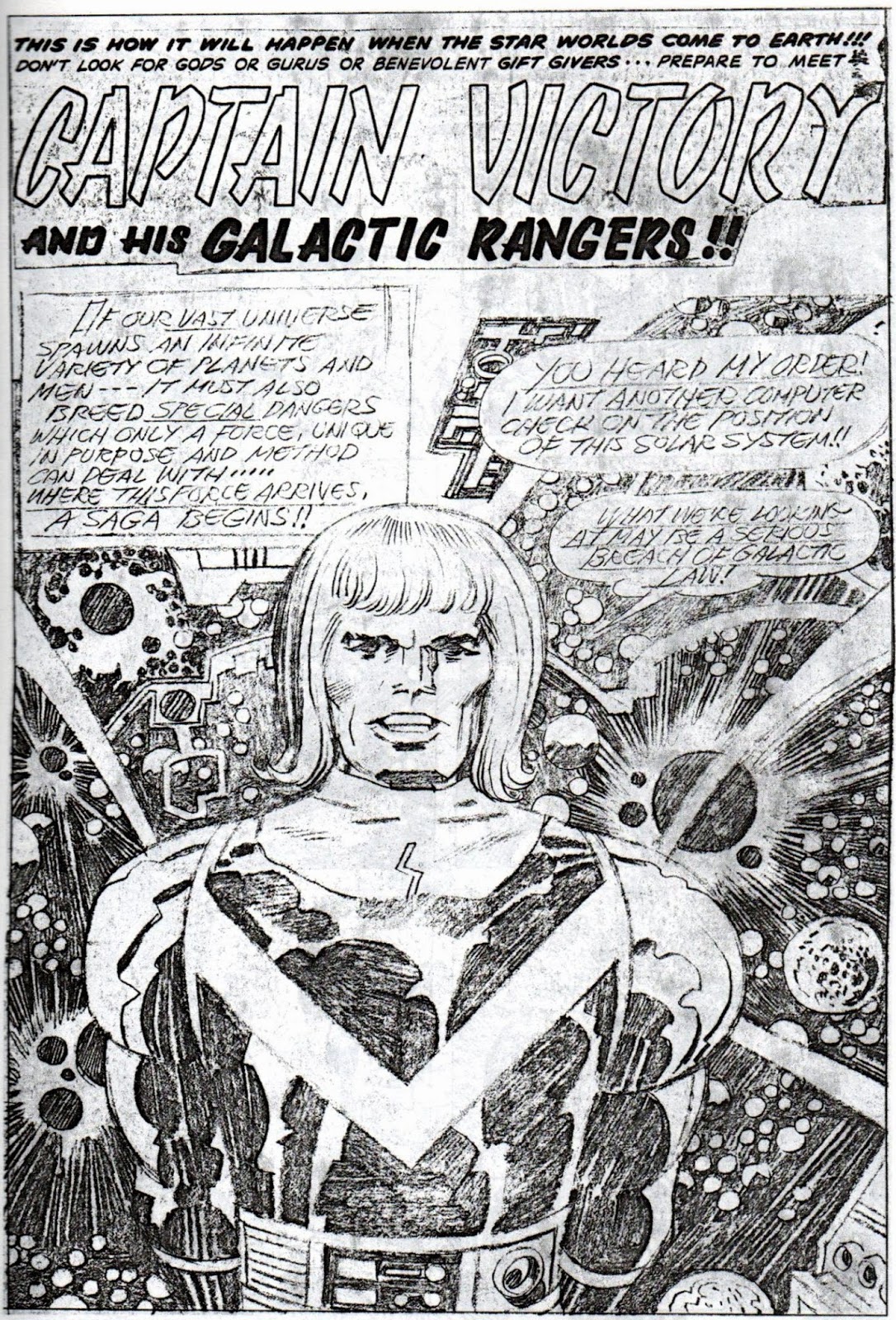 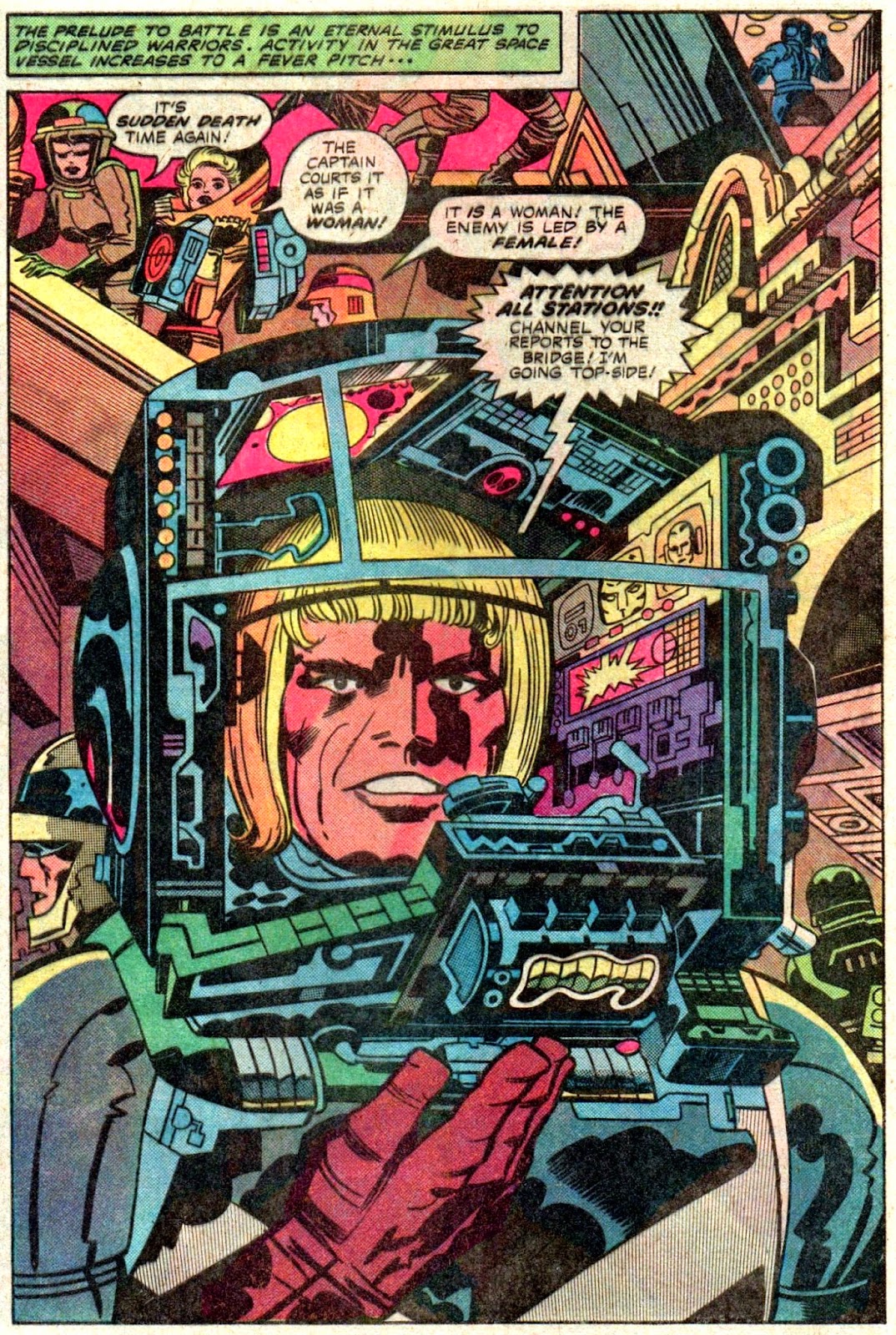 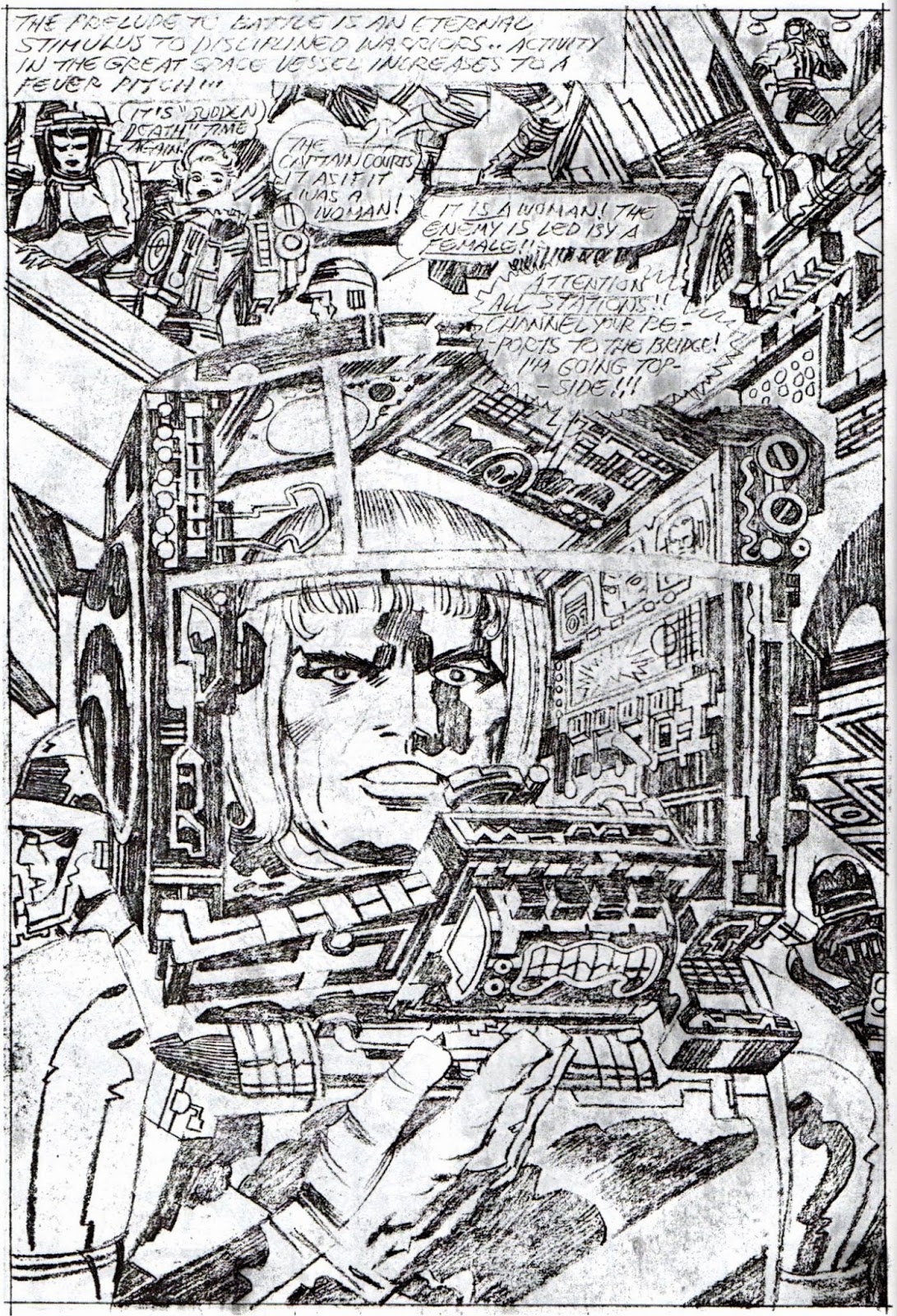 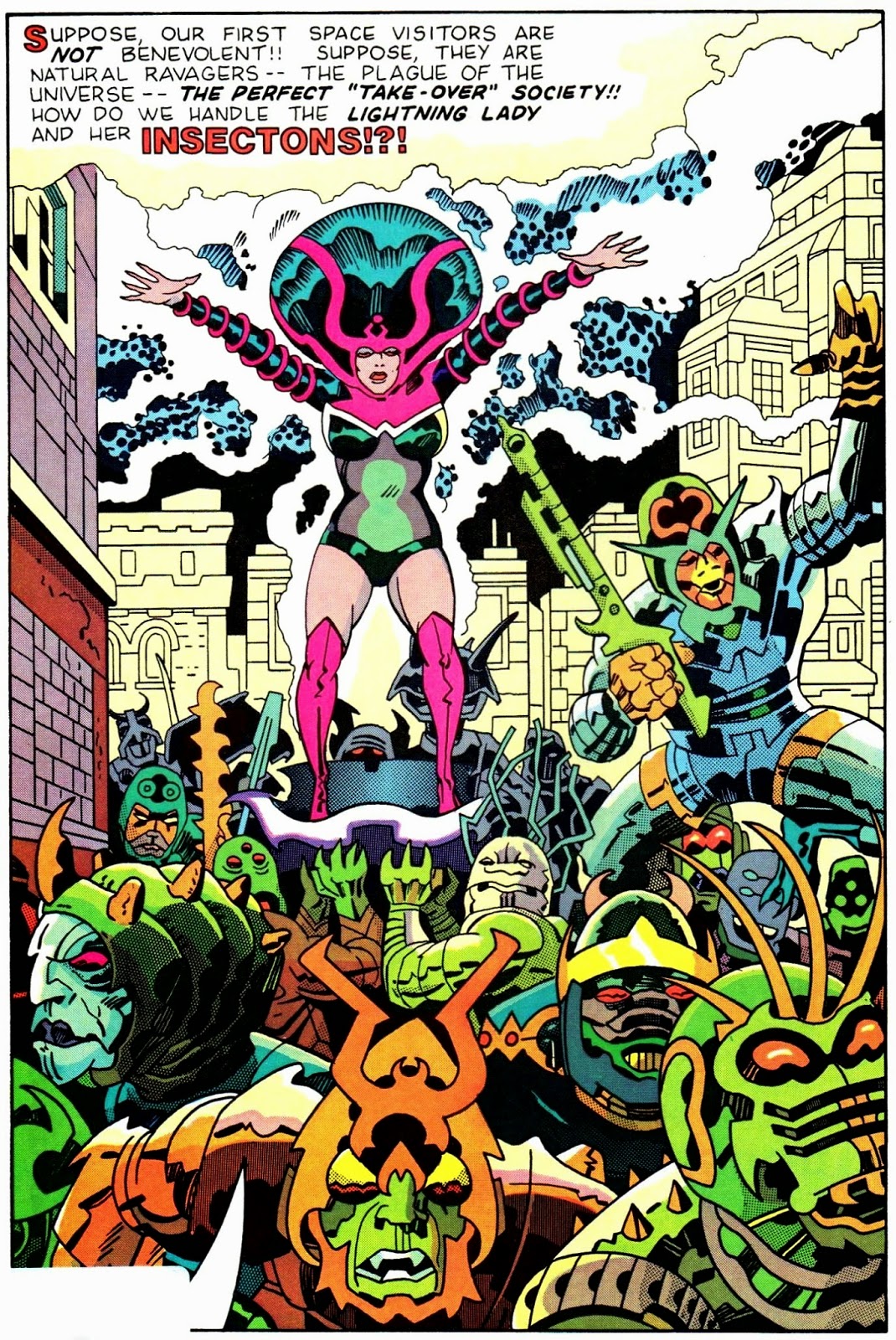 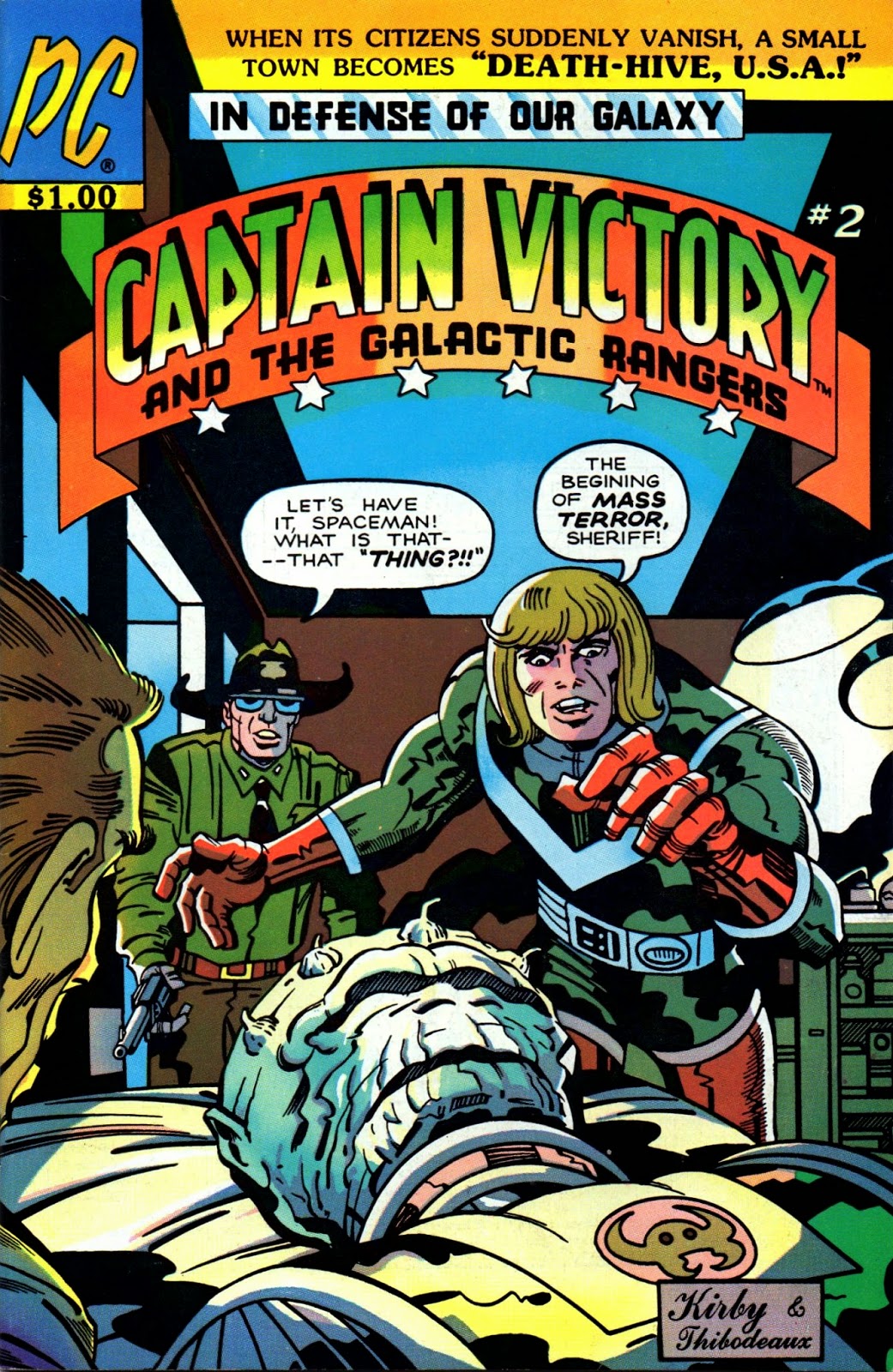 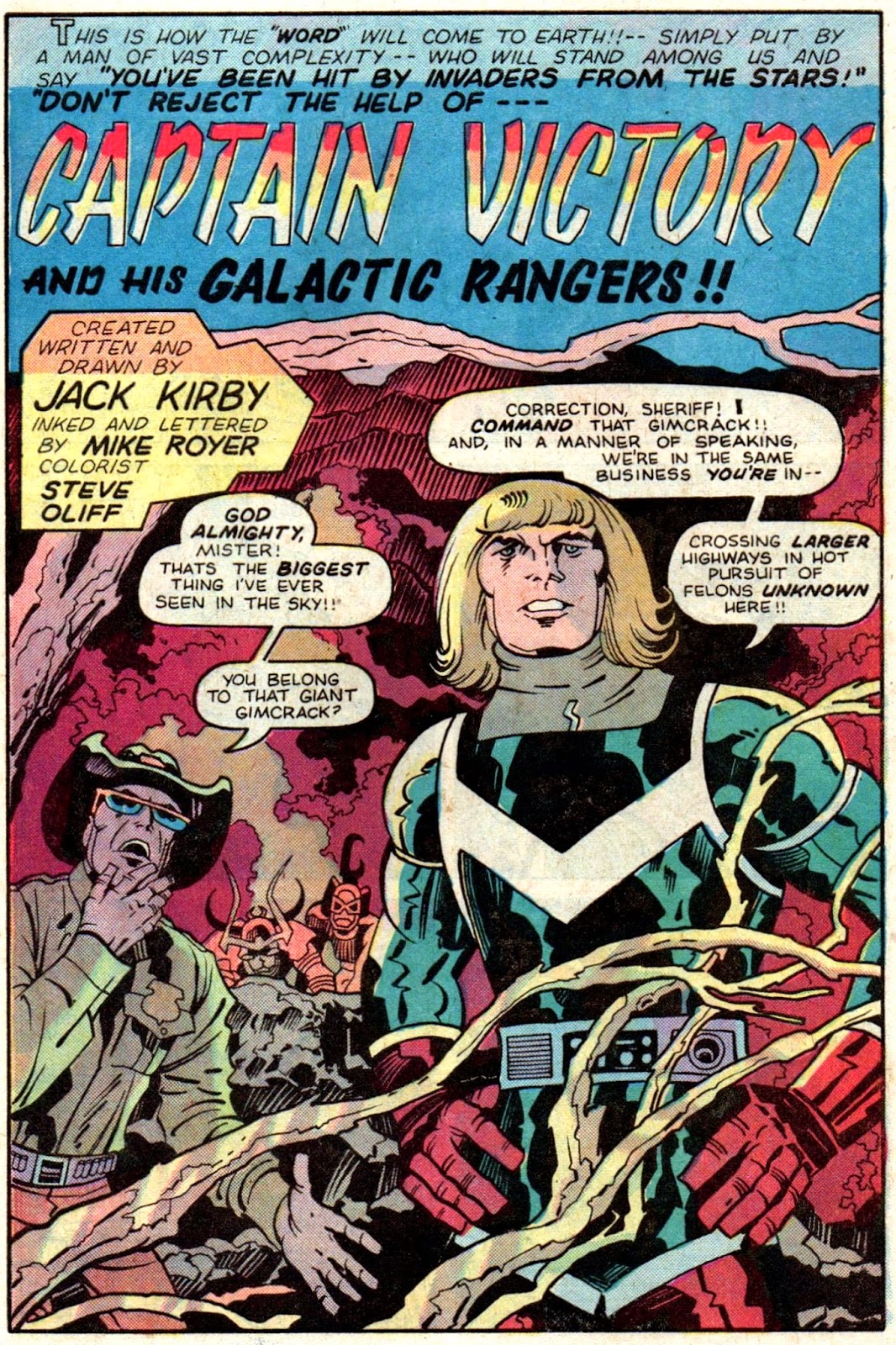 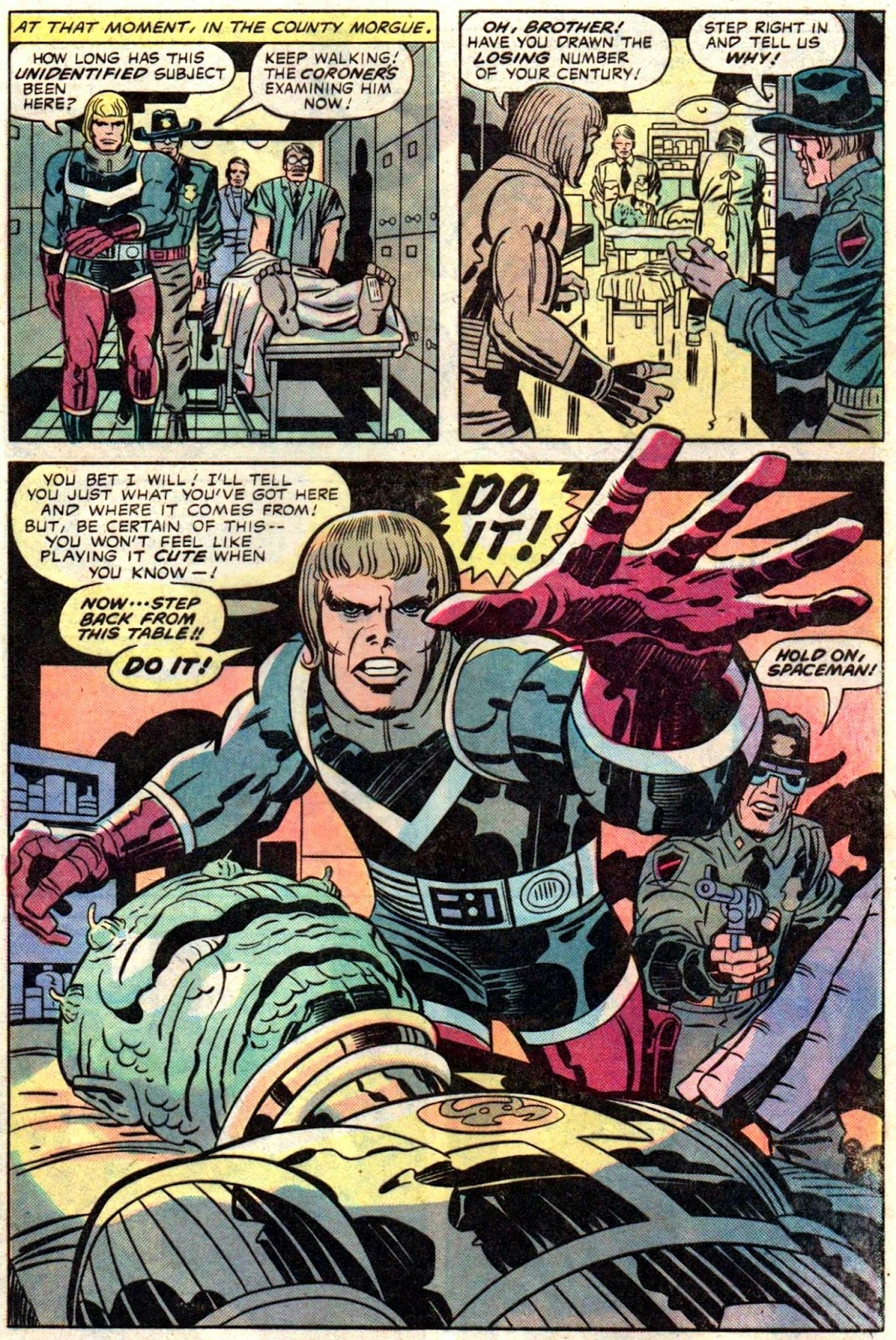 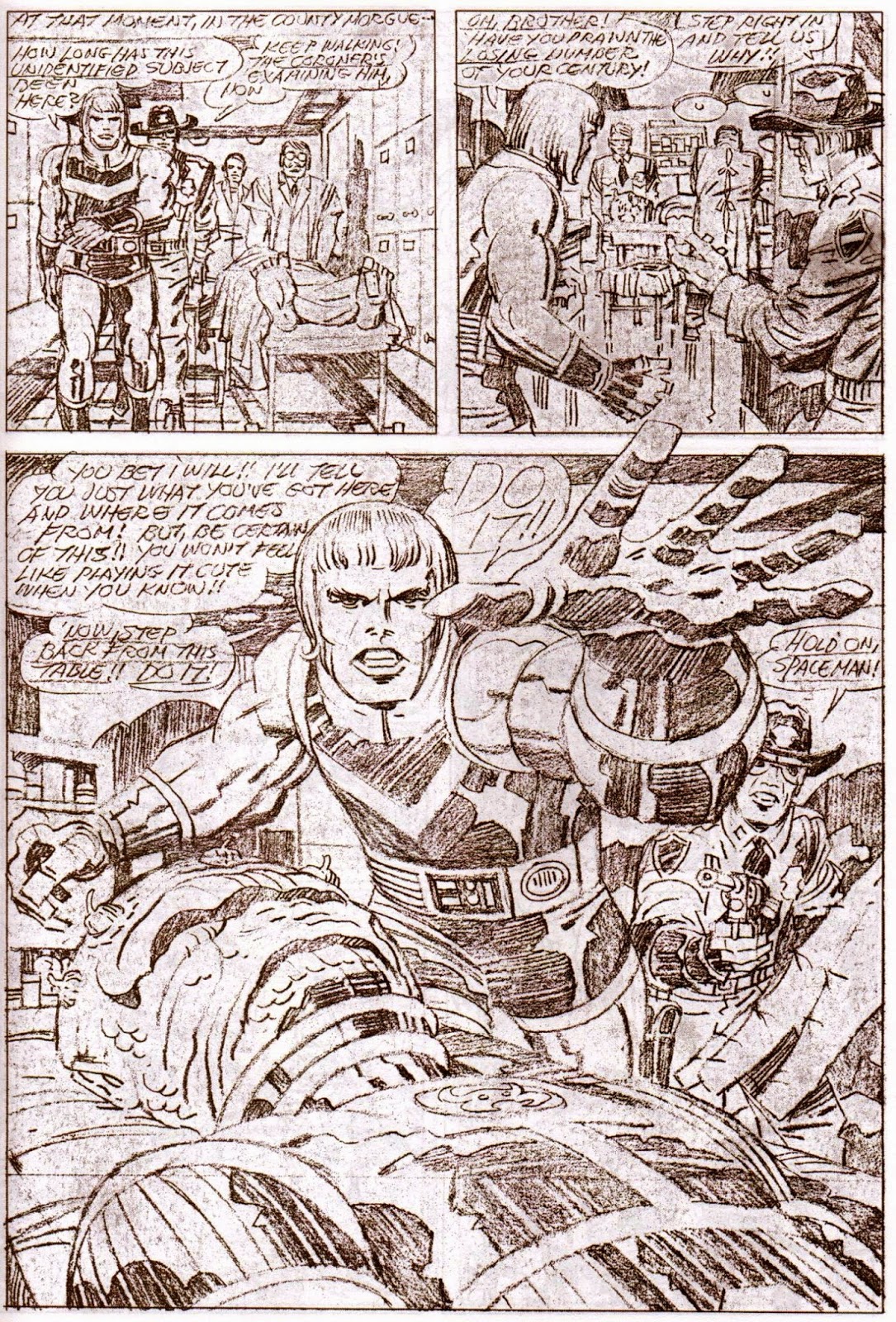 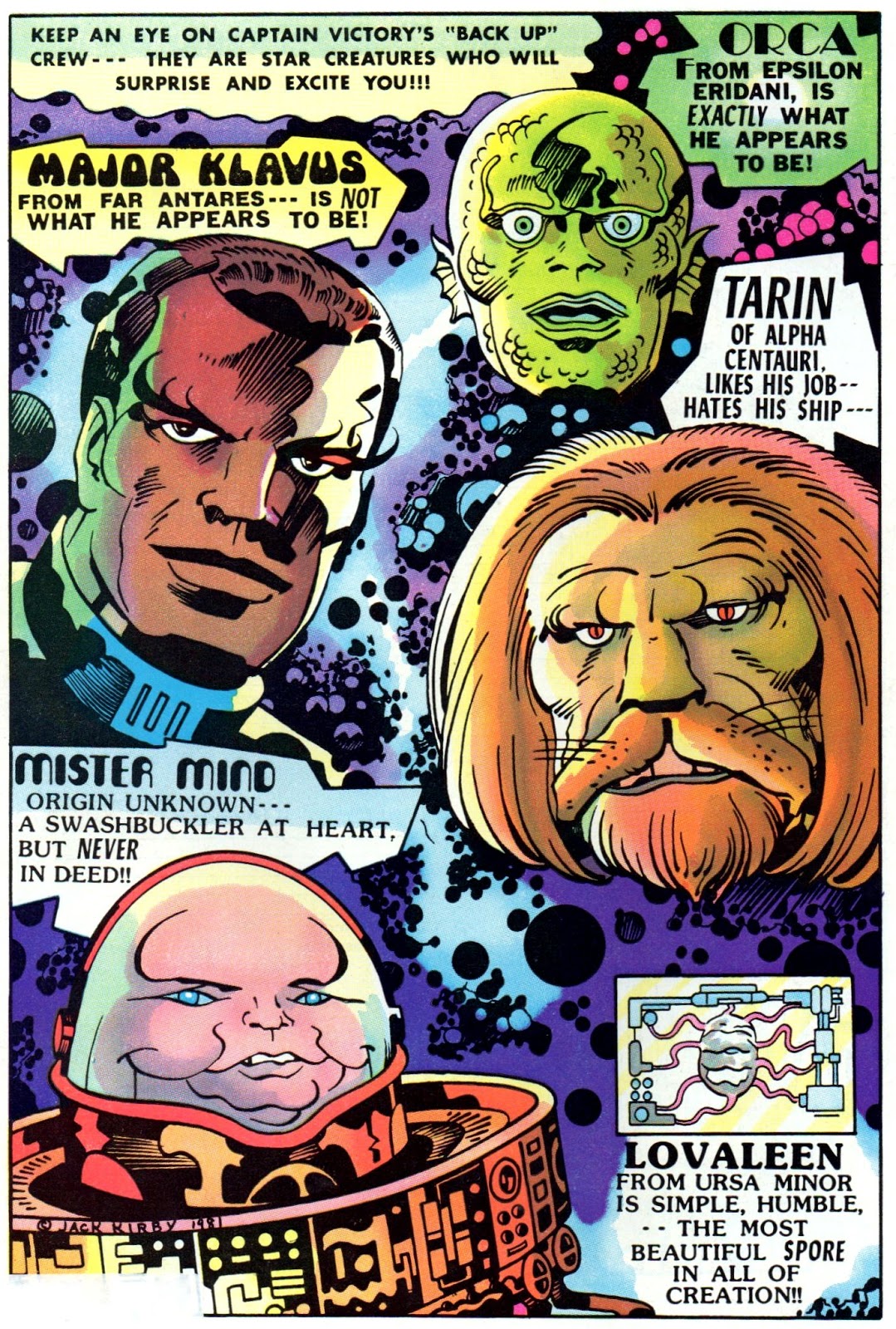 Pacific Comics were a really good publisher- they had some really strong titles back in the day with some great artist.

I really liked this book (along with his "Silver Star" title) so nice to see it here again, I thought this was Kirby's last real "hurrah" in comics, after that I think the years took their toll and the ideas dried up - still looking back on his work after so long you realise just how good he was. . There was a "new" Capt Victory book a few years ago from Dynamite comics with Alex Ross covers that seems to have been successful as there a a new "Captain Victory and the Galactic Rangers" coming in July from Dynamite

If I remember correctly, McScotty, he'd started CV a few years before it was published by PC, so the early pages (a few instances aside) still had a touch of that 'ol' Jack magic'. The 1983 Special, drawn later, wasn't Kirby at his best 'though, it has to be said. I read about the new CV title, which I'll take a look at, but the character and concept don't really do anything for me, sadly.

I didn't realise the book was drawn / published prior to being at Pacific, would make sense as the early issues are a lot stronger in the art department than his more recent work around this time - Im looking forward to Keith Giffen's "Infinity man and the Forever People" title at DC - Giffen (for me at any rate) has a great handle on Kirbys style (without ripping him off ...kinda)

Oh, I didn't know about the DC mag - I'll keep an eye out for it. I like Steve Rude's Kirby-style art - I'd love to see him draw more Kirby-themed comics. Keith Giffen drew some stories in the Deluxe Thunder Agents comics in the '80s, I think. Did you ever see his Superman/Action Comics tale back in the mid-'80s, where he had Asterix and Obelix stand-ins? I enjoyed that. Incidentally, McScotty, just to clarify - CV wasn't published prior to PC releasing it, but I believe quite a few pages had already been drawn.

Yeah the new DC mag is out in June - Giffen did what I thought, was a good OMAC series when the "NEW 52" first came out -- sadly it got cancelled. Oh I didn't get the Giffen Superman /Action books , they sound good (I do like Giffens work a lot) I have the Deluxe Thunder agents books - think Giffen drew "Lightening" but if I recall it was in the José Muñoz style that I wasn't keen on. I enjoyed Steve Rudes Mr Miracle book .

It was only one Giffen Superman/AC issue I was referring to, McScotty - I'll do a post on it in the near future.

I tried to like Kirby's later stuff, I really did, whether at DC or Marvel, and while I could certainly admire his ambition and efforts, I somehow found that I just couldn't connect with what he was trying to do.
There were lots of reasons, I'm sure, but just looking at these pages reminds me of one of the major ones—and I'm not being facetious in any way when I say this: that haircut. What was he thinking? It looks like Sue Storm from the very early days. It's impossible to look at it and take the character seriously. Any of his other good work in the figures and backgrounds is completely undone by it.

Sadly, GB, he no longer seemed to have his finger on the pulse when it came to giving readers what they wanted or what they would've liked. Had he still being working for Marvel, his later creations would've been no more than supporting characters in mags like the FF and Thor. As I said somewhere else, he was just out-of-sync, but he was a man of his time so perhaps it's understandable.

The coloring of the earliest issues you mentioned. It's restrained and not as glaring as the color which was to come. Preferred the subtle stuff.

Well thanks for showing all these pix .Reading what you said and taking on board McScotty's, GB' & Rip's comments , it tells me all I need to know.

Glad to have been of assistance, JP. I'm sure McScotty, GB and Rip feel the same.

Kid, you mentioned the Giffen ASTERIX/SUPES crossover in ACTION. I loved that! It was strangely melancholy, but great fun at the same time. I grew up on ASTERIX and was delighted when the ACTION book came out.

Yup, it was a right cracker of a story, sure enough. As mentioned, I'll be doing a post on it soon.

I did a little research and found this link which discussed the coloring on those comics. It seems as much as we like it now, it got the colorist fired off the book at the time. Sheesh!

Thanks for the link, Rip - I took a look. Amazing to think that Jack preferred the later colouring in the Special to that of the early issues. I'll have to check out some of the later monthly issues (if I happen to see any) to see what the colouring was like in them.

I bought CV no. 1 in exactly the same place- Virgin on Union Street. I had just started studying English & Psychology at Strathclyde Uni and as a very shy 18 yr old, I found Virgin a bit daunting at first. It occupied a strange territory between 70s head shop and 80s Goth/Americana hangout. I bought many comics there between 1981 and 1984. Around that time, Virgin adopted the "Yuppie" grey & yellow colour scheme, which seemed to banish the Furry Freak Bros and the Cramps with their bongs and vampiric paraphenalia. But they regrouped with a vengeance in the city centre for the next decade and a half.

I must confess, Dougie, that I enjoyed my trips into Virgin, and still have many comics and books purchased there at the time. Just imagine we picked up our CVs at the same time on the same day within seconds of one another - we might've been standing together in the queue to pay and never knew it (not that we could). Hardly an exciting speculation for an issue of What If?, but I find it fascinating. (Always was easily amused.)