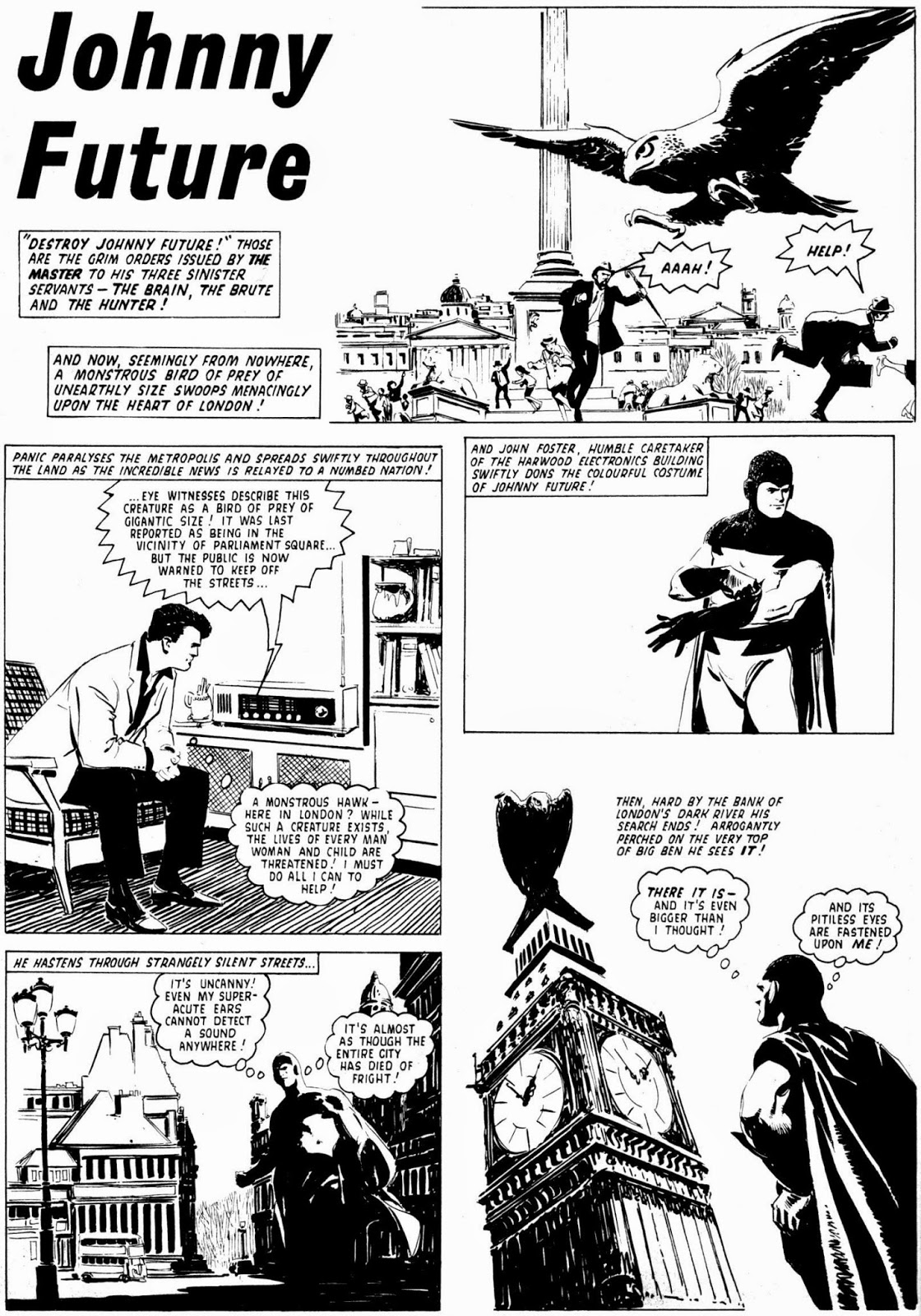 It's really a rather obvious connection to make when you think about it.  The clue is in the names - JOHNNY FUTURE and The MAN Of TOMORROW!  So - what's the 'missing link' between the two awesome appellations?  SUPERMAN!  Here's how it happened in the fevered depths of my imagination.

JOR-EL, concerned about the impending demise of KRYPTON, has been observing our Earth through a space-time warp for many months.  It seems like the best choice of planets to which he can send his infant son - if and when he perfects the hyper-drive of the spaceship he's working on.  He's already built a prototype, but needs to test it before he can risk using it as a space ark for little KAL-EL.

So, donning a replica suit of 20th century Earth-style clothes, he rockets to our planet with the intention of confirming that it would be a suitable environment for his young son.  He crash-lands in the African jungle, but although uninjured, a small radiation leak from the ship's hyper-drive power unit transforms him into a hulking brute of incredible strength and limited intellect, who comes to be known as The MISSING LINK.  Exposed once more to leaking radiation from a nuclear power plant, he returns to normal, but with no recollection of who he is.

If you've been following the Johnny Future strips I've been featuring here from time to time (or read them in FANTASTIC back in the '60s), then you already know the rest.  However, what you didn't know (until now) is that, after his 'career' as a superhero on Earth for many months, Jor-El's memory returns and he makes his way back to the jungle to repair his ship and return to Krypton mere seconds after he left. (Due to that ol' space-time warp, remember?)  The rest, as they say, is history.

However, there's more.  Writer JERRY SIEGEL originally envisioned Superman being rocketed to Earth, not from Krypton, but from a doomed Earth far in the future.  Similarly, in my version of events, Earth is Krypton (having evolved over thousands of years and - due to an ever-expanding universe - now occupying a different place in the heavens than it used to).  The globe has been renamed and our once bright yellow sun has succumbed to the second law of thermodynamics (entropy) and is now a fiery red, affecting the gravitational pull of the planet.

Anyway, that's how it happened in my little world.  Bear it in mind as you read the latest instalment of this fondly-recalled strip illustrated by the astounding LUIS BERMEJO - it may make you view the character just a little bit differently. 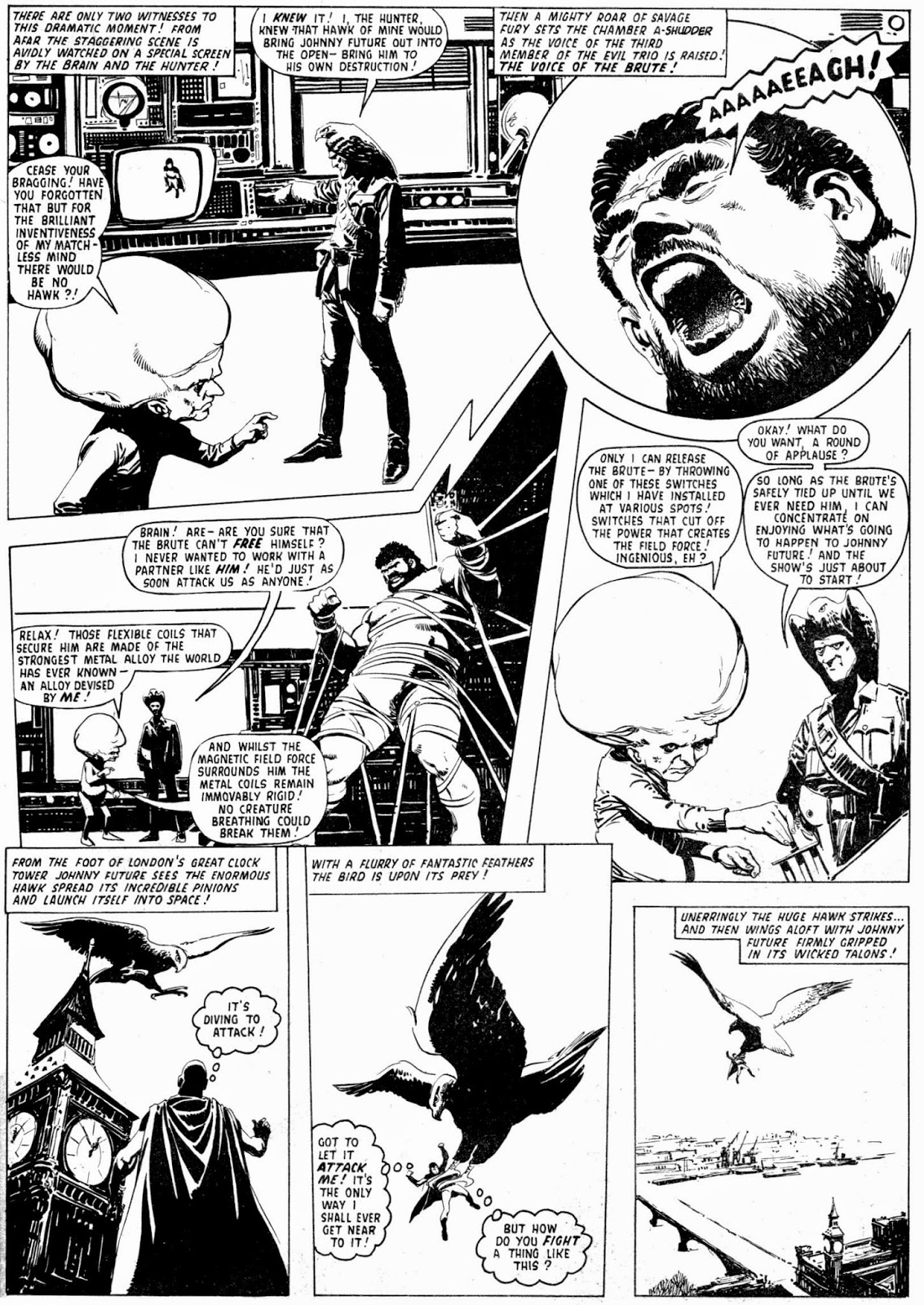 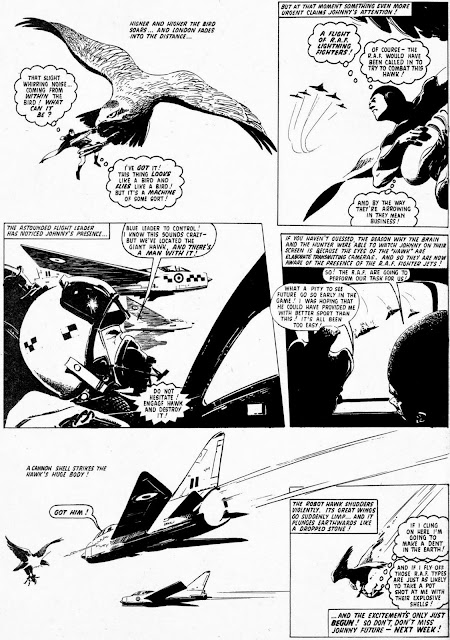 When I hear an idea that is feasible it tends to take on a life of its own as well as fitting into place with what has gone before.
I easily fitted that one into my world.
Aye,thats a great idea.

Now if only Fantastic and JF were still being published, eh?