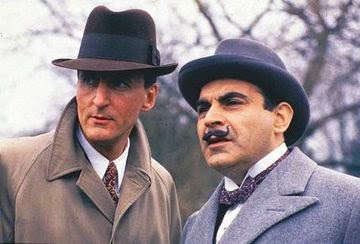 I'm a big fan of the POIROT TV series, wherein the Belgian super-sleuth was definitively portrayed by DAVID SUCHET.  Of course, PETER USTINOV did a fine job prior to Mr. Suchet, and ALBERT FINNEY won an award for his role as the detective in MURDER On The ORIENT EXPRESS.  I don't really understand why, to be honest, as - good actor that Mr. Finney undoubtedly is - his version of Poirot was awful.  His accent was all over the place, he sounded like he had a sore throat, and his performance was more suited to a pantomime than a big-budget movie.

But that's by the by.  I've just watched The MYSTERIOUS AFFAIR At STYLES and was reminded of a glaring absurdity that no one seems to have picked up on.  I read the book quite a while back, but I'm unsure after all this time if the TV episode takes certain bold liberties with AGATHA CHRISTIE's plot (as TV programmes often do) or whether it's faithful to how the authoress described events. If it's the latter case, then Agatha made a big-time boo-boo.  (In fact, 'twas the TV show's oversight.  See comments for details.)

So get this:  The desperate murderer is in his victim's bedroom sometime after the fact, recovering a letter which incriminates him.  He hears Poirot and company approaching along the hallway, stops to tear the letter into three vertical strips, twists them into tapers ('spills' Poirot calls them) for lighting the fire and pops them in with some others in a vase atop the fireplace.  Then - get this - he exits through an adjoining door and makes himself scarce.

So here's my problem:  Why didn't he simply take the letter with him and destroy it at his convenience, rather than leave it for Poirot to eventually discover and identify him as the murderer?  To say nothing of risking getting caught by taking the time to tear the letter into strips.  It makes absolutely no sense and is a 'crime' against logic, to say nothing of common sense.

It's a crime I'd like to see Poirot solve, but why not play detective and see if you can come up with a reasonable-sounding explanation for this loopy lapse in logic? You all know where the comments section is - so what are you waiting for?

(Incidentally, "Because then there wouldn't have been a story" won't be considered an acceptable answer.)
Posted by Kid at Friday, April 11, 2014

The incident of the dog in the night-time was curious, Kid, but the affair at Styles was mysterious.

My advice for someone reading Christie for the first time is to start with Murder On The Orient Express, and if you can accept the events described in that one, then you won't question possible lapses of logic in her other stories too much.
In Styles (as I understand it), the murderer had to retrieve the letter from a despatch case and destroy it, as it contained evidence of his guilt. He used a key to get in the only door, broke the lock on the case and got the letter. The most important thing was that the letter not be found by the other people in the house, so he took the extra time to tear it into strips (spills) and put them in the vase - Christie liked to hide things in plain sight. Even if his presence in the room cast suspicion on him, he was still safe as long as the letter wasn’t found.
There is no other exit door in Christie, as far as I'm aware, and Poirot makes sure he can't come back for it.

You should never dismiss "Because then there wouldn't have been
a story" as the reason for people doing things in an Agatha Christie novel! I see it as part of the fun. She had a less well known contemporary called Freeman Wills Crofts who was the exact opposite - his villains never do anything remotely far-fetched, self-defeating or illogical, and as a consequence you normally guess them correctly a third of the way into the book. I like Crofts just as much as Christie - the former for realism and the latter for escapism!

In this case however I suspect the daftness of the situation is exaggerated by the TV adaptation. These are never as good as the books, partly because they have to fit a complex 200-page novel into 90 minutes, and partly because of the cosily formulaic atmosphere of the TV series which is quite different from the books. Also, when reading a novel you just see what the author wants you to see, rather than annoying little details like the one you point out! Looking at the online version of the novel at Project Gutenberg, the relevant passage seems a lot more plausible: "But now a fresh dilemma arises: he dare not keep that piece of paper on him. He may be seen leaving the room — he may be searched. If the paper is found on him, it is certain doom. Probably, at this minute, too, he hears the sounds below of Mr. Wells and John leaving the boudoir. He must act quickly. Where can he hide this terrible slip of paper? The contents of the waste-paper-basket are kept and in any case, are sure to be examined. There are no means of destroying it; and he dare not keep it. He looks round, and [...] In a moment, he has torn the letter into long thin strips, and rolling them up into spills he thrusts them hurriedly in amongst the other spills in the vase on the mantle-piece."

Ah, so it's all the fault of the TV adaptation then, GB & Andrew. (I must've subconsciously thought it curious that it was considered mysterious, GB, but I've amended it. Ta.)

The book's text disposes of the absurdity, but in the programme, there is another door into an adjoining room, making it rather unlikely that the murderer would be seen leaving the room of his victim.

However, I see another problem. Given who the murderer is and whose room he is in, even if he were found there, there would be no reason to suspect him as he could explain his presence in an entirely reasonable way. Neither would there be any cause to search him because, as far as I remember, no one knows of the letter's existence.

So, it seems to be a case of swapping one fly in the ointment for another, although, admittedly, the TV one is more glaring than that of the book.

The maid has told them about a letter or document that upset the victim greatly before her death.
The murderer knows it's in the locked despatch case and has to sneak into the room and break the case lock in order to steal it.
Poirot and the others find the case broken into, so are aware that the letter/document has been taken from it.
The murder room was meant to have been sealed off, so if the murderer had been found there … man, I'm starting to confuse myself now.

Suffice it to say that it makes more sense when you read it the way that Christie laid it out, Kid.

(I had to cut and paste your response, GB, because it came in while I was amending my previous comment and was therefore out of sequence. No point in confusing people even further.)

No doubt it does make more sense in the book, but I still have my doubts as it all seems so contrived. I find it unlikely that the murderer would have written the letter to begin with when he could have spoken to the intended recipient at an opportune time. They obviously planned the murder together, and it's highly unlikely that they did so in a series of letters. Also, being interrupted in the composition of a letter that no murderer would ever have written to begin with, why did he not simply stick it in his pocket instead of his writing desk, locked as it was? That's what I would've done. (I see that Poirot and Company DID know about the existence of the letter, even 'though its contents were unknown.)

I find that when you analyse these type of tales, the plot often hangs on people indulging in a series of acts which are highly illogical.

One thing's for sure 'though. The TV folk made a boo-boo in the way they adapted that particular part of the story.