The first issue of FANTASTIC I ever purchased was #7, but the first one I saw was #3.  That was on a trip into Glasgow with my parents and brother one Saturday, but as its free gift was a disgusting piece of 'confectionery' of which I never partake, I wasn't much interested in the comic.  The first I recall being aware of the new title however, was with #2, mainly because of the stushie caused by the free gift.  It perhaps seems ridiculous nowadays, but it certainly made a fuss back in the dark ages of 1967.

Whether it was a genuine story or one cobbled up by bored journalists on a slow news week, I remember Scottish presenter BILL TENNENT doing a 'piece' on the STV news about parents being worried that children who couldn't get the comic and free gift of 'scar' stickers might take to disfiguring themselves with knives in order to create their own set of scars.  Are kids really that stupid?  Some might be, certainly, but I rather think they'd be more likely to draw their own scars and stick them onto their skin than reach for the penknife dad gave them for Christmas.

Bill Tennent was a well-known Scottish TV presenter, and I'm surprised to see that he retired from TV in the late '70s to run the MARIE STUART Hotel in Glasgow.  I was even more surprised to learn that he died in 1993 at the too young age of only 59.  He was such a fixture of television in Scotland that most people around my age will be saddened to learn of his passing if they weren't already aware of it.  Remember the programme TIMESLIP? For years I was sure that it was Bill who did the introductory piece at the beginning of the first episode, until I watched it on video in the mid-'90s and saw it was PETER FAIRLEY.  Perhaps Bill did the intro shown in Scotland as he was better-known here?  Anyone know?

Anyway, that's two subjects covered under one banner.  You sure get your money's worth on this blog.  Take a look at the controversial stickers below.  Do they make you want to cut yourself, or merely print out a copy and stick them all over your face and wrists?  Either way, you're a nutter! 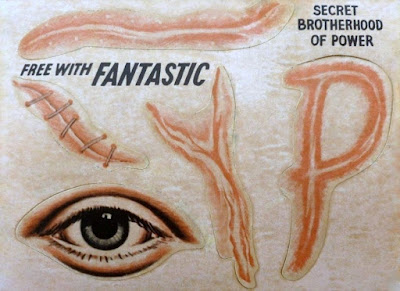 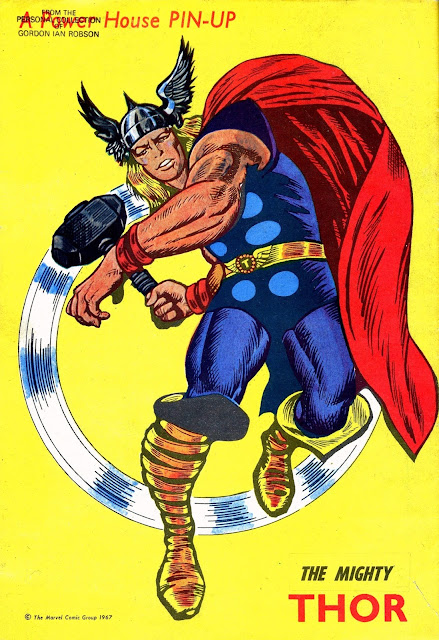 My abiding memory of that actual issue of “Fantastic“ was that a neighbour (about 7 years older than me) sold me a couple of those tattoos for 3d (in old pence) about 1 ½ new pence, and some marbles and a War picture library comic . I was only 6 or 7at the time and had no idea what a bad deal that was for me. My mum, normally a very lady like woman, was not happy and dragged me to his house demanding my stuff back (which I got) and that he should be ashamed trying to con a child (me) out of his things. I vaguely seem to remember the “scars” caused a bit of a minor outcry at the time in the media. I never bought “Fantastic” or “Terrific” (my older brother and his pals got it now and then and I read those) as they were pretty expensive comics and superheroes were not really my thing then (especially Marvel characters who were relatively new to me (and most folk) in 1967).

Bill Tennent wow that’s a blast from the (Scottish) past, wasn’t it Bill Tennent that made the immortal gaff of "I hope all your doughnuts turn out like fanny's" at the end of a Fanny Craddock doughnut-making item on the STV news? I didn’t realise he retired from TV so young (and passed away at such a young age) he was pretty iconic in Scotland at the time (as was John Toy).

I loved Timeslip I used to run home from School (Primary) to watch it – saying that my only memory of it now is of the boy that appeared in it with his big glasses and the “newsreader” that presented the programme at the start (although I think I only remember this from a recent nostalgic TV programme) but I see why you thought he was Bill Tennent. Do you (or anyone) remember a rather strange program that featured Freddie Garrity (from Freddie and the Dreamers) I think it may have been a segment in the show “little Big Time” but can’t see mention of it anywhere. It was definitely a weird story about the underworld (or similar) with robots etc??

I suppose whether that was a bad deal or not, PM, would depend on how many marbles you got and how much a War Picture Library cost at the time, eh? Yes, Bill Tennent was indeed the very man who uttered that immortal gaff - I wonder if it was deliberate? Regarding Timeslip, if Bill didn't do a Scottish version of the intro, I'd have been aware that it wasn't him at the time. It was only in later years that my memory of Peter Fairley would've been supplanted by Bill for some curious reason. Perhaps I just remembered the glasses years later, and my imagination provided a reasonable stand-in? The Freddie Garrity thing doesn't ring a bell, but as with a lot of memories these days, I don't actually remember some things until I see them again. (I do recall Little Big Time 'though.)

Edit: Just read your comment again, PM, and realized YOU gave HIM the WPL and the marbles, not the other way around. (Must pay more attention.)

Phew, was I lucky that I actually got #2 and those stickers! I'm sure that I would have butchered myself if they hadn't been in my comic,( even though I didn't actually wear the scars! I couldn't run the risk of making my parents faint! )

I remember it, McS! Anything to do with Freddie, - I was a huge fan!
Incidentally, you can read about the time I actually met Freddie on one of Kid's schooltime scandals posts over on his other blog, if you're interested?
I'll find you the link!....

You're everywhere tonight, JP - keep those comments coming. As for these scars, I didn't bother with them, but if I'd wanted them and couldn't get them, I'd probably just have drawn them on myself with a Biro.

I'm even somewhere else, Kid! A couple of people asked for me to write out an old Judge Dredd story from 30 years ago that I dreamt up, so I am in the process of posting it on a blog I created some time ago ( just to see if I could ! ). I'll finish posting the first draft, which is very rough and I'll give you a link!

https://captainocdblog.wordpress.com/author/captainocd/
There you go, Kidda, - you'll need to scroll down to the older posts till you get to "Judge Dredd..."

I've added you to my blog-list, JP. so you'll be famous before you know it. Why, there must be at least half a dozen people who read my blog who'll now see yours. Took a quick look at your Dredd story - as you say, it's very rough, but it'll be interesting to see what you do with it once you've given it a bit of a polish. I'll be watching.

Thanks Kid, and thanks for your input. Yeah, very rough, I literally rushed it out of my brain, where it had been festering for 30-odd years, before I forgot any of the details. There were a lot of factors that needed addressing, which I hope that I have done in the second draft! And, in the good tradition of 2000 AD, - it's all shamelessly nicked! :-)

Good artists imitate - great artists steal. So why not with writers, eh, JP?

Took a look. JP, if you don't mind, send me your email address (which I won't publish) so that we can discuss your script.

Just looking at your avatar, PM - is that your nose, or are you eating a sausage?