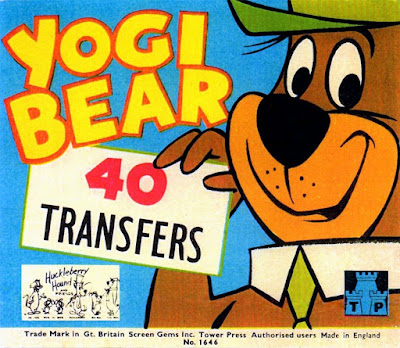 As regular readers will likely already know, I'm a sucker for just about any form of YOGI BEAR merchandise.  Why?  Because the bold bruin was a prominent feature of my early childhood and reminds me of those far-flung days.  Just received these 'dabitties' from the '60s, and though I can no longer recall if I ever actually had them when I was a kid, I'm glad to have them now!

"But why are they called 'dabitties'?" some of you may be wondering.  Because you'd lick (or wet with a sponge) the back of your hand, place a cut-out transfer onto it, then dab on it 'til it had dried and the image had been 'transferred'.  (I'm sure you divined the 'transfer' part for yourselves.)  I don't know whether this was just a Scottish term or it was used across Britain - what were they called in your neck of the woods?

Now if anyone has a set of DALEK dabitties from the 1960s that they want to sell, I'd be a very happy man! 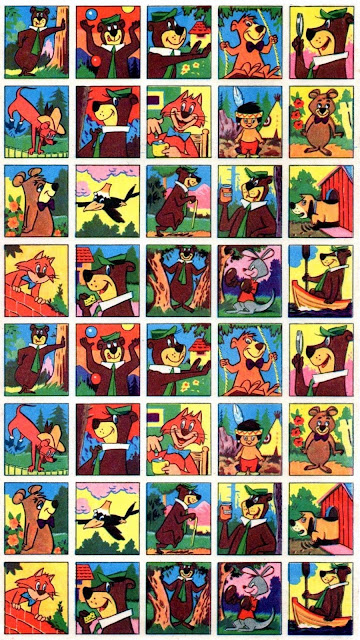 Yep I called them "dabitties" as well got a feeling to was a Scottish / Glasgow thing - it means something else now in urban slag but spelled differenctly ((ie "da bitties " 2 words ie " my biatch" a "bittie" is a not nice wasy to talk about a girl etc. I had forgotten about transfers like these ie lots on a sheet of paper - I don't recall these ones but remember Bugs Bunny, Sylvester and Batman ones

It's The Daleks dabitties I had, McS. I remember buying a set when I was on holiday one year ('64 or '65), and again a year or two (or three) later, when I lived in another house. I've got Captain Scarlet ones (which I've shown on the blog), but it's The Daleks ones which I remember the most.

I think this may be the Dalek rub on transfers you mean (I can't access the site it links to) but this link via Google (images) shows a picture of them (again I think);

Thanks, McS, but I've already got a picture of the transfers and header card on the blog somewhere.

I've heard them called transfers and rub-ons. And the kind that could be ironed onto clothing were called iron-ons.

I wouldn't advise trying to iron on one of these transfers to the back of your hand, TC - you'd end up with a different mark than the one you wanted. (Hurts just thinking about it.)

I thought you'd already found the transfers when you posted the picture of them way back.
Good luck in finding some! :-)

Nah, I found a picture of them I had, I don't have the transfers themselves, JP. Hopefully one day.