INSCRIPTIONS ON THE HEART...

I obtained this battered little book from eBay a few years ago, and, like most collectors, I prefer my books to be inscription-free.  Lately however, I've started to find inscriptions fascinating, as they prompt me to wonder about the people mentioned in them.  For example, just who was Bryan, is he yet alive, was he still the apple of his daddy's eye as an adult as he was as a child?  Did he give the book away, lose it, was it stolen - or did his mother donate it to a jumble sale when teenage Bryan was out at school one day?  Did he even give it a second thought, miss it, or was it he himself who put it on sale on eBay, quite indifferent to the token of his father's love for him that he was discarding?

Do you ever wonder about the people who originally owned the second-hand books you've picked up in charity shops, jumble sales, or eBay?  What's the most touching inscription you can remember, and do you ever wish that you could have an inscribed book you received as a child from a now-deceased friend or relative, but which you later gave or threw away, back again?  Do tell. 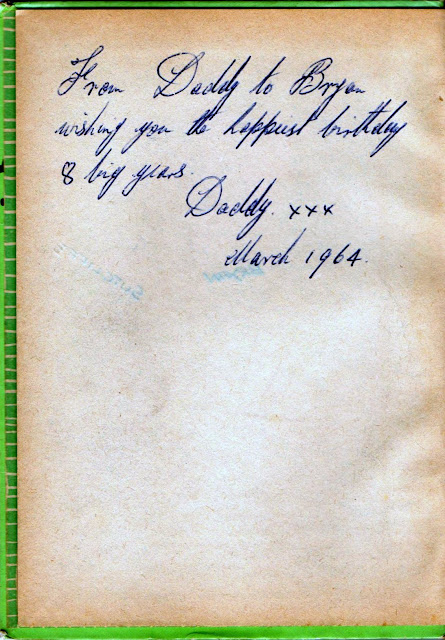 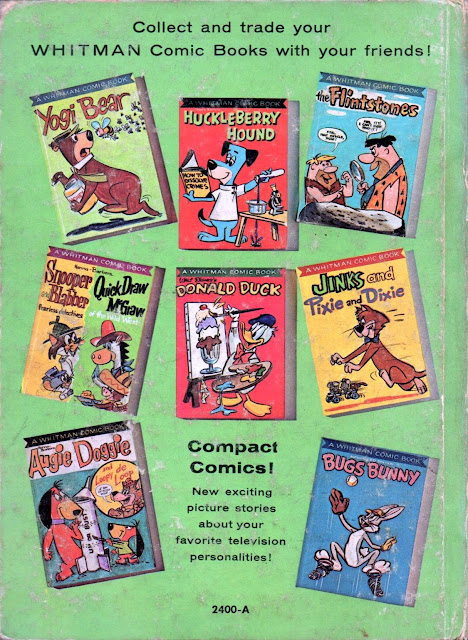 A few years ago when I was picking up 60's - 1972 UK annuals (primarily) for Ken Reid and Leo Baxendales work I noticed a lot of these inscriptions (mostly in this e ”This book belongs…” sections usually written by the kid that got the book) and wondered a lot about those very things. The only “strange” thing that happened re one of these inscriptions was when I bought a 1967 Wham annual in London (when I worked there) and the inscription was from a kid in Cambuslang (where I used to live). I don’t remember my family writing in my annuals but if they did I would love to have any annual or book my mum, dad, brother or grans (all sadly no longer here) got me - but I still have the memories when I look at certain annuals so that’ll have to do. That’s a very nice inscription in that annual would be great if the lad saw that on your blog. Would be so cool if the guy whose book that originally was read this blog and saw this book.

I had a magic robot. He held a little wand in his hand. You placed a card on one side of the board and he would magically rotate and point to the right answer on the card. I often wondered how it worked but I wondered who gave it away for the jumble sale since it worked fine.

Yes, it would be nice if he saw this post. McS - unless he wants the book back, 'cos then he's onto plums. I haven't changed anything about my blog, so could the problem be at your end (oo-er, missus)? Did you keep any Birthday or Christmas cards that any of your family sent you, McS? That's pretty similar to a book inscription.

I think you can still buy them, Phil, so a replacement is within your grasp should you want one. I don't think I had one, but I remember others having the game. Think I'll buy one if I ever see it on sale anywhere.

I did a quick search and magic robot was first made in 1953! Blimey I'm not that old. He was fairly amazing though. And it's still being produced as a retro toy. I may get one just to amaze kids who think it's all done by computer.

And I think I'll get one just to amaze myself, Phil.

That little message from Daddy to Bryan is really poignant 52 years later - that means Bryan will be 60 next month if he's still alive. I haven't seen any inscriptions in books but the Hunter's Planet Of The Apes website features all the strips from the UK POTA weeklies and often includes the letters pages too which are fascinating to read, a window into a vanished world - how many of those people remember or even care that they had a letter printed in POTA so long ago ? Apparently, one of those letter-writers - a certain Gordon Robson - has a nostalgia blog :D

A nostalgia blog, CJ? Is it any good? I've never heard of him, so he must be a complete non-entity. Unless he's got an impersonator of course, 'cos only famous people get those. Gordon Robson, eh? Now that I think about it, the name does sound slightly familiar.

I wouldn't trust that guy if I were you...sounds sketchy...

I hear he's a man of letters, Phil.

I've heard this Robson fella is one of the worst trolls on the internet - best stay away !!