"The MARVEL AGE Of COMICS, PHASE TWO!" declared the cover of ASTONISHING TALES #25, which marked the debut of DEATHLOK The DEMOLISHER.  Created by RICH BUCKLER, it was probably inspired in part by TV's SIX MILLION DOLLAR MAN - but only in the sense that Deathlok was a cyborg, as was STEVE AUSTIN.  That was the only similarity, although, in 1977, 2000 A.D. featured a strip called M.A.C.H. 1, which, inevitably I suppose, combined elements of Austin and Deathlok for a British readership.  However, that's a story for another time - let's now enjoy some cataclysmic covers from the '70s.

And don't forget to come back for part two. 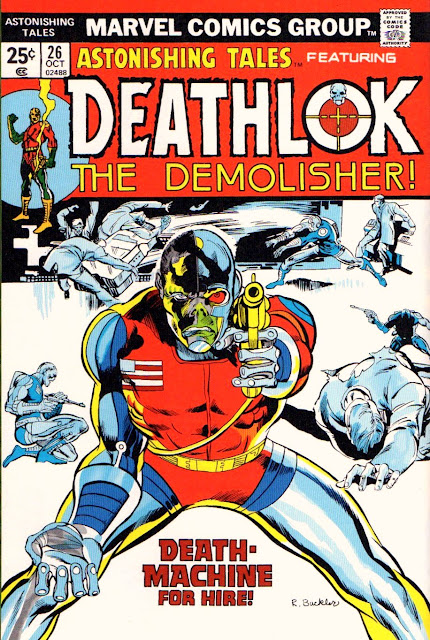 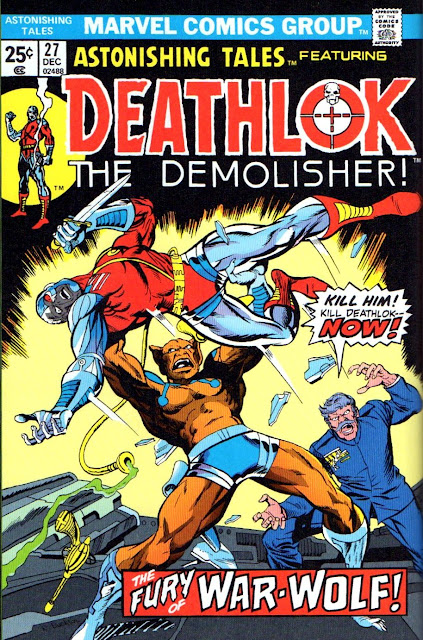 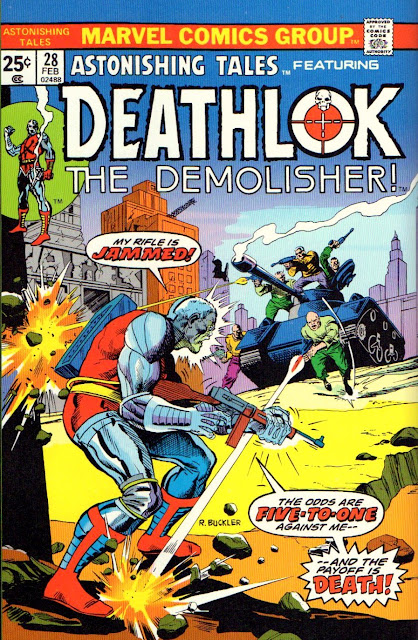 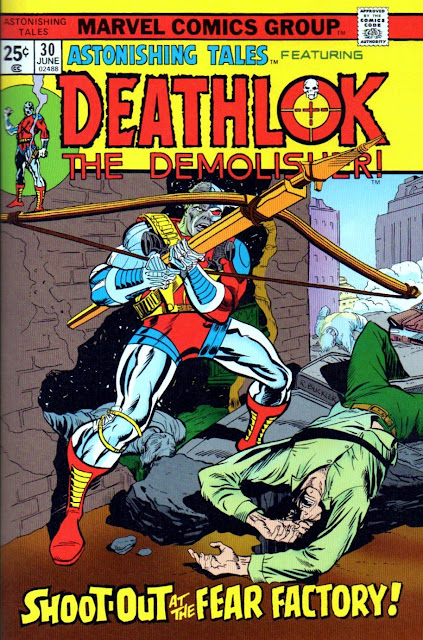 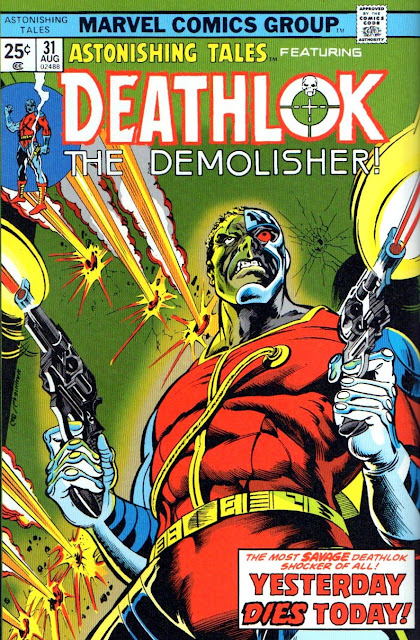 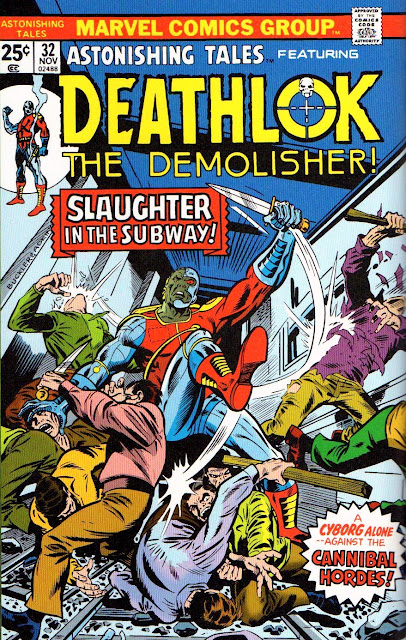 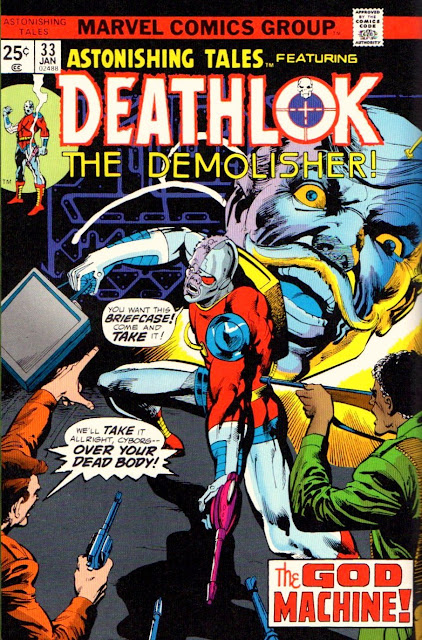 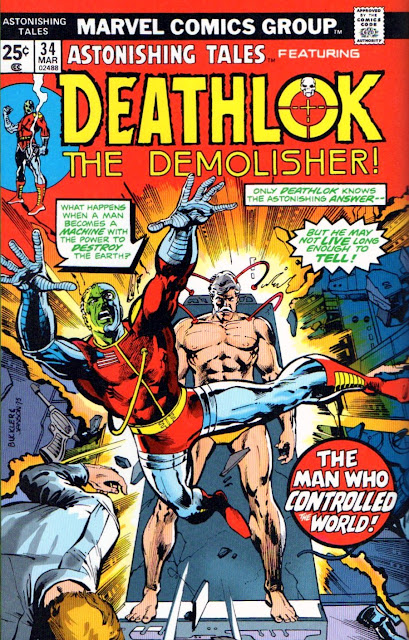 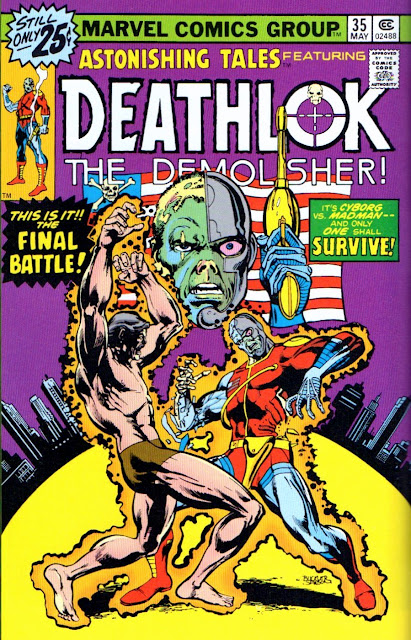 Now this one brings back memories - had just about all of these from back in the day and I'm not sure where or how I lost some over the intervening years, but thanks to eBay I plugged a few gaps. Stopped hunting though when the collected volume came out recently. Despite Mr. Buckler's stylistic influences shifting in the way he drew from page to page, sometimes from panel to panel! (here's a Kirby look, now Adams, now Buscema...) I really enjoyed the science fiction action tales. The conversations in Deathlok's head between the human and machine parts of his brain were a nice touch. As I think I have mentioned before it's a shame the television version on Agents of SHIELD came up with such a watered down version of the character. I could see this one being a great combination super hero / action movie on the big screen if done right. Shame it's unlikely to ever happen.

I thought I'd had a few, PC, but only two or three covers seem familiar to me. You're right about Buckler's shifting styles, something that Ron Frenz's art also 'suffered' from. I don't watch S.H.I.E.L.D. so I haven't seen Deathlok on it, but you never know - he may get the big screen treatment yet.

When the first issue came out I thought this was the coolest comic I'd ever seen! At the time I was a fan of the Six Million Dollar Man, and this struck me (at age 16) as a much more "grown-up" treatment of the same idea. Strangely though, I think I went off Deathlok before very long - I only remember buying the first four issues. It was overtaken as "the coolest comic ever" by Starlin's Warlock! Nevertheless, Astonishing Tales #25 is one of the select few comics from the 1970s that I've kept to this day (still in NM condition, last time I looked).

I've got Starlin's Warlock in the original issues, Andrew. Not the ones I bought at the time, but replacements I bought sometime in the '80s. I've now owned them far longer than my original copies 'though. The '70s, eh? Comics seemed brilliant back then. Today's comics don't excite me quite so much, in the main. (With the odd exception.)

Rich Buckler seemed to be everywhere at this time.
I had maybe a half dozen of these issues and I loved them.

A friend and I drew a small four panel strip for the school magazine,and we just lifted them from Deathlok.
It caused confusion for the staff because they were unaware of the character and these two small quiet school boys were into extreme violence!

Just like Andrew states above,I was led away by Jim Starlin and my favourite resurrection Adam Warlock.

I don't watch Agents of Shield,two episodes were enough.
My other half does,which says a lot as she is not a comics book fan.
In passing one evening, I asked her "who is that guy ?"
"Deathlok!" she replied, in a knowing manner.

I just left it.

Now I'll have to Google search the AOS version, Baab. Just to see how much they've diluted the character. What happened to your Deathlok comics?

The comics will probably have faded away,lost for whatever reason or there may be a couple of dog-eared or coverless in a bag in the loft which I need to go through thoroughly.
I found issues of Kamandi and Omac and the Starlin Warlock in that old bag.

In fact I am doing nothing else at the moment so.....

Talking of coverless comics, Baab, there's someone on eBay selling copies of DC's '70s version of Black Magic for a ridiculously expensive price. Far better copies (with covers) go for half as much.

I have in the past bought dog eared copies on e-bay.
Just as reading copies.
I wont be doing it again though.
But never a coverless copy, thats stretching it.

I don't know how the guy's got the nerve. The only way I'd even think of buying a coverless copy would be if I already had the cover but there was damage to the mag's interiors of my copy, and if it was dirt cheap.

Well ,I just went through my comics and there are no issues of Deathlok.
One more for the list-collected volume of Deathlok.

It's well-worth having, Baab. You'll love it.

I won Astonishing Tales #25 at a Halloween carnival when I was 12. I remember reading it, and it's probably still in my box of comics in storage at my folks' house, but I never realized that it was the first Deathlok story. Will have to see if I can find it.

I think I've said before, G - get that box back now. You'd be amazed at how many parents say "He'll not be wanting all that stuff now, let's give it to the church jumble sale". Result: Bye-bye goodies.

I've got them taken care of now, Kid. They are stored away in a nice, safe place, so just need to find time to go through them......maybe when I retire in ten or twelve years. :)