It's surprising just how many people still think that SPIDER-MAN was thrown into AMAZING FANTASY #15 because it was the last issue, just so that STAN LEE could get the character out of his system while assuaging MARVEL publisher MARTIN GOODMAN's reservations about the teenage hero by the fact that, hey, it was the mag's last ish, so what did it matter?

As you can see from the above lower cover caption box (and if that's not a contradiction-in-terms, I don't know what is), there was "An important message to you, from the editor - - about the new Amazing!"  And just what exactly was this message?  Read it below.  (Click to enlarge, then click again for optimum size.) 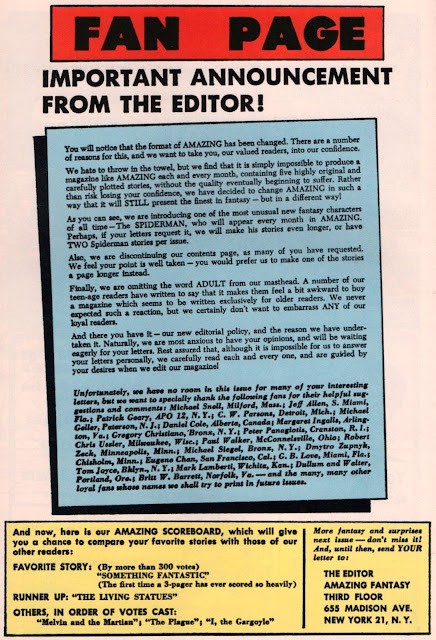 So there you go - AF #15 was never intended to be the last issue.  It was meant to be the first in a new direction for the mag, so clearly the decision to cancel it was made after it had been prepared for (or sent) to the printers, and maybe even after it had gone on sale.  (See the final caption below for further proof.)  When later recounting Spidey's debut, Stan remembered that it had appeared in the final ish of AF, joined two and two together - and came up with five.  Which is not to suggest that he set out to deceive, only that much of his 'reminiscence' belonged more properly to what he believed had most likely happened than what actually did. 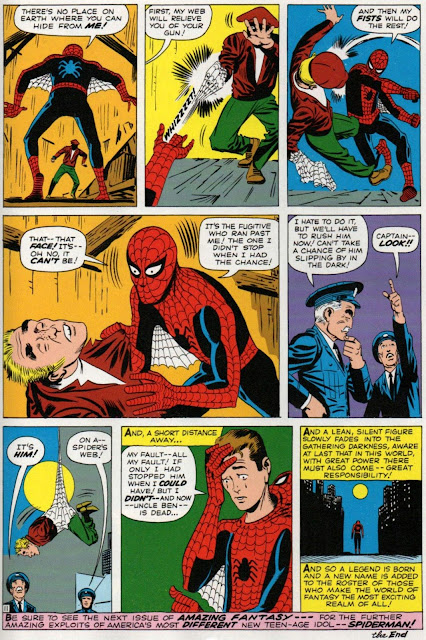 Regular readers will be aware that I've covered this subject before, but this time I decided to include the actual pages to show that I ain't just whistlin' Dixie.  So, yeah, AF #15 was the last ish, but that's not why Spider-Man appeared in it.  Excelsior!
Posted by Kid at Monday, February 29, 2016

It's also reasonable to think that Amazing Spider-Man #1 and 2, which each consist of two half-length stories, were using material intended to run in further issues of Amazing Fantasy.

Not only reasonable, Joe, but I seem to recall someone demonstrating it to be so by the code numbers on the splash pages.

What I want to know is how the hell did a 15 year-old schoolboy make a costume like that ? I can just about manage to sew on a button.

If he can create web-shooters and invent adhesive webbing, a bit of fancy stitching probably wasn't much of a problem for him, CJ.

Kid, shouldn't Peter Parker have been able to create his own natural webbing ? After all, he had the abilities of a spider.

He had the abilities, but he didn't have the natural physical 'equipment' to produce his own webbing (thus the first movie being ridiculous in that aspect in my view). So he could only replicate a spider in as much as his own human make-up would allow him to. Besides, my own view (despite what the comics may now suggest) is that it was the radiation that imbued Peter with enhanced powers, not the spider. However, because Peter saw the spider, it had a psychological influence (to some extent) on the way his enhanced abilities manifested themselves. Potentially, if he hadn't been limited by his own perceptions of what a spider could do (enhanced strength, speed, the ability to cling to surfaces), he might have developed even greater powers.

I don't know why they didn't simply continue Amazing Fantasy with Spider-Man as the lead feature, which was obviously their original intention. If the new strip proved popular, they could have eventually changed the title and continued the numbering sequence (as they did when Journey Into Mystery became Thor). If Spider-Man had proved unpopular, they could have dropped the strip and replaced it with something else (maybe the Hulk or Ant-Man) as the lead feature. Either way, it would have been easier and less expensive than cancelling AF and starting a whole new comic. (Starting a new magazine meant paying a fee for a second-class mailing license, which is why publishers often changed the title of an already-existing series: Crime Patrol became Crypt of Terror and then Tales From the Crypt, All-Star Comics became All-Star Western, and so on.)

Of course, today, they cancel and reboot a series just so they can start the numbering over with a new #1. But that's because today's market is all about collectors and investors/speculators. Back then, it was more about casual readers.

As for the idea that Lee talked Goodman into letting him introduce the new character because the comic was already on the chopping block and there was nothing to lose, maybe Stan just did a little harmless embellishing for the sake of a good anecdote. Or, more likely (and, as with the controversy over how much credit should go to Lee, Kirby, or Ditko), a person's memory can play tricks after so many years.

I don't think Martin Goodman would've even been aware of the content, TC. He'd probably just seen the sales figures for previous issues and ordererd the mag's cancellation right away, but too late to stop the publication of #15. However, when the high sales figures for that issue eventually came in, Spider-Man was revived in his own title. I believe at some stage Stan probably did have a conversation with Martin about making a teenager a hero and calling him Spider-Man, but I don't think it occurred in the run-up to Spidey's initial appearance, it probably came afterwards when Stan was justifying his decision to do the character to start with.

Stan probably had to defend his decisions a few times to Martin, so when he later realized that #15 had been the last issue, I suppose he just assumed it had been the usual process of trying to talk Martin round, and "It's the last issue anyway" struck Stan as the kind of thing he'd have said in those circumstances. Or it was merely a little innocent 'artistic license' for, as you say, the sake of a good anecdote.

Yeah but I don't want to see Spider-man spin webbing from his butt. Doesn't look heroic. Also same with having eight appendages, spider eyes and face.....we must suspend some reality. Or else watch as Peter wraps Flash Thompson in a web he crapped out, inject him with poison and suck his innards out....then go watch him fight crime as an eight legged spider headed monster.

To say nothing of crawling up the inside of the toilet bowl and biting some poor unsuspecting person on the @rse, Phil. Who'd want to see that? (Down, CJ.)

Spectacular spider-man 15 we see Spidey become a spider....so let's pretend that never happened shall we?

Kid, I assume you are joking about spiders crawling up the inside of a toilet bowl - because they'd drown in the U bend. I wouldn't go near a spider but my father loved them and if he saw one in the house he'd pick it up in his cupped hands and put it outside - I asked him if he'd ever been bitten by one (thinking of peter Parker) and he said never.

Nope, not joking, CJ. Apparently it happens in Australia. I've also heard of one occasion where a rat popped up in a toilet bowl while someone was perched on it (the bowl, not the rat). I assume some spiders can create little bubbles of air around themselves so that they don't drown. I'm fond of spiders and just let them crawl around. I'll only move them if they're in danger of getting trod on.