FAVOURITE COMICS OF THE PAST - PART THIRTY-NINE: THE INVINCIBLE IRON MAN #66...

If my old memory is functioning properly, I purchased this ish from the same newsagent's where I'd once regularly bought TV CENTURY 21 when I was a mere six years old.  I then took a trip along to visit a friend who lived in a relatively newly-constructed housing scheme, and stopped by the side of a path bordering a field to read my latest acquisition.  There was some kind of small concrete construct under which I sheltered, and when I'd finished the comic, I continued my journey to my friend's house.  Oddly, I recall nothing much of the rest of the day after reading IRON MAN #66, but I associate the issue - and one page in particular (4th one down) - with the point in the road where I'd stopped to read it.

That's because the field at which I'd stopped resembled the one portrayed on the page.  Had GEORGE TUSKA included a concrete water tower in the picture, it would have been almost a dead-ringer for where I read the comic.  For many years, whenever I passed that field, I couldn't do so without thinking of ol' Shellhead smashing through his gigantic foe; nor could I read the comic without thinking of that stretch of road and the field itself.  Sadly, there are houses there now and the field is no more than a memory, but the memory is never more vivid than when I peruse that page in one of my favourite comics of the past!

If you read this comic back in '74, what are your memories of it, and do you associate it with any particular place?  Humour your fellow old farts by sharing your reminiscences in the comments section.  Quick, before the memory fades forever! 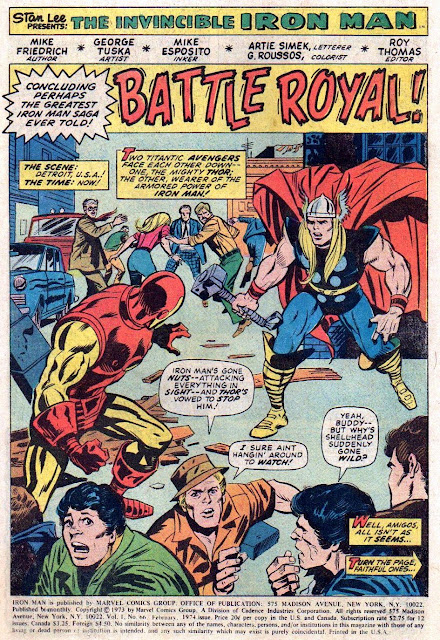 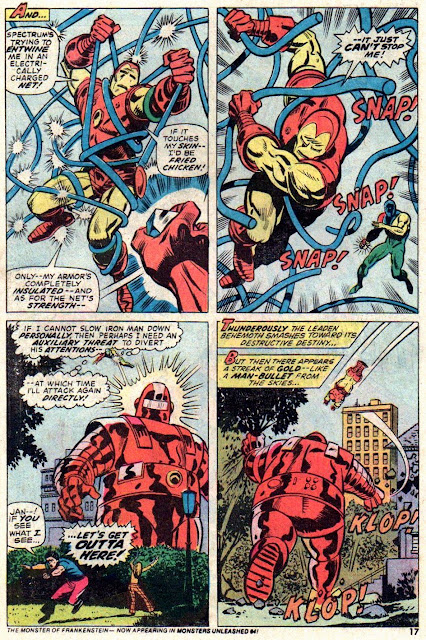 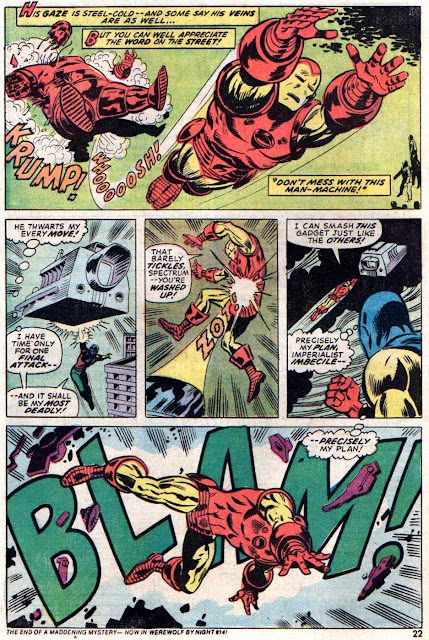 Kid, I'd have waited till I got back home to read the comic in comfort with a cuppa and some digestives. Back in 1981 I joined a sort of comics club where you bought comics by mail order - I remember getting a parcel of comics in the post in December '81 but I waited till the school Xmas exams were finished before I opened the parcel - it was agonizing having to wait but I was glad that I did as I could enjoy my comics without the exams hanging over me.

I probably read it again when I got back home, CJ - or a day or two later. After I'd read a comic, I would often just pore over its pages again (and again), drinking it all in. I love comics (when they're good).

I tended to only read (or even view) my comics when I go home as well Colin - I don't actually recall reading this particular issue of Iron Man , not even in the UK Spider-man Comics Weekly reprints (ans I got every one of the first 300 issues of that) but it looks a belter (love Tuska's art understated but (imho) brilliant) - I have very strong memories of buying Iron Man issues 38 and 63. I picked issues 63 up again recently and like you said here I was right back to 1972 and 1973 again (respectively - issue 38 was published in 1971 but I bought it at a newsagents about late 72 as you could do back then with US comics) . I plan to pick up the Marvel Graphic Novel Collection - Iron Man edition (£9.99) later on and hope this issue is in it (its from the Tuska era so even if not it will still be a great wee read)

I'll be taking a look at the new Marvel Graphic Novel Collection, McS, to see if anything appeals to me, but I'll be selective if there is. I love Tuska's art on Iron man, especially when inked by Johnny Craig. I loved Craig's work when he drew the strip himself - top artist.

The Marvel Graphic Novel Collection is well worth looking at I don't get them all (as have a lot of them in other formats or originals) but the 11 I have picked up have all been great value - including; the Defenders (Marvel Feature and first 5 issues of the original title) Dr Strange (Ditko) from Strange Tales 130 - 146 - Avengers "Birth of Ultron" - Steranko's SHIELD etc - some are not my cuppa tea but recently they stared reprinting more 60s - 70s runs - the latest edition is The Inhumans run with Kirby, Neal Adams.

I'll not bother with the Ditko ones, 'cos the Omnibus volume is coming out soon - containing all the Ditko issues of Dr. Strange and Spidey Annual #2 (The Wondrous Worlds of Dr. Strange!) Cover-to-cover Ditko at his best - what's not to like?