GET YER THRU'PENNY BITS OUT... 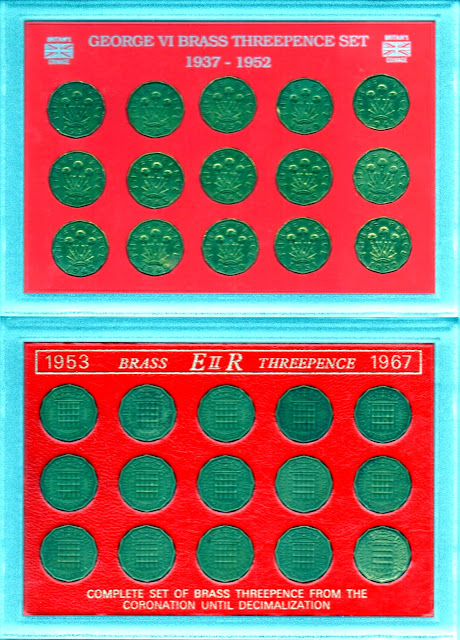 I've scanned these sets (by COINCRAFT) together, facilitating me displaying them at a slightly larger size.  I remember one Sunday night back around 1976, a Scottish TV sports commentator (ARTHUR MONTFORD maybe) was delivering a talk at a local youth club (yes, I was still young enough - just) and he told the tale of a football player attempting to head the ball, but on making contact, the ball shot off at an odd angle. "Ach, ye've got a heid like a thru'penny bit!" shouted someone from the stands.  As Arthur said, the instant you heard this, a mental picture appeared in your head of someone with a head shaped like a thru'penny coin.  Pure gold.

Anyway, here are examples of every brass threepenny bit produced from 1937-1967.  Interestingly, although the 3d was issued in ROYAL MINT Proof Sets until 1970 and remained legal tender until August 31st 1971, none were minted for circulation after 1967.  Not a lot of people know that.

Now, however, you do.

Anyone recall if there was a Scottish TV football commentator called ALEXANDER ARMSTRONG in the 1970s?  (Not the AA who presents POINTLESS.)  That's the name in my head, but, if he existed, I can't find out anything about him when I do an Internet search.) 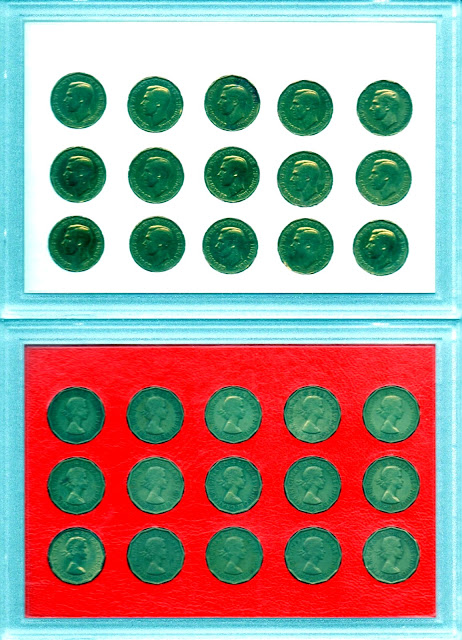