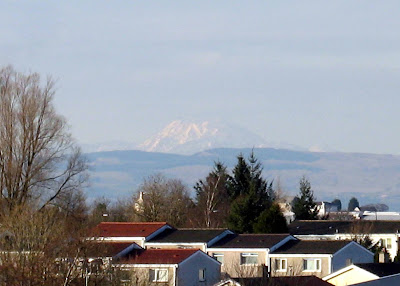 The mountain in the distance is BEN LOMOND, taken on Saturday from the top of the street where I once lived back in the '60s and early '70s.  It was clearly visible from my back garden (and also from my bedroom window if I popped my head out), and as I said in a previous post, when I first read The HOBBIT, it was easy to imagine that Ben Lomond was The LONELY MOUNTAIN under which the dragon SMAUG sat on hordes of treasure that BILBO BAGGINS and his crew hoped to 'liberate'.

Isn't imagination wonderful?  Anyway, just thought I'd share the picture with you here.  As I was taking it (minutes after leaving a friend's house), some fat brat on a bicycle called me a rude name as he whizzed past.  I sincerely hope the little b*gger crashed into a lamppost as he sped away.  That's what I'd call instant justice!
Posted by Kid at Monday, February 25, 2013

We moved out of Glasgow as part of the overspill in the early sixties and were luck enough to end up in a nice wee place surrounded by woods. Our new house had a veranda that gave us a view not unlike your own of Ben Lomond in the far distance. It was a reminder that the Highlands were no more than 10 miles away as the crow flew. In summer we'd leave the house early of a Saturday morning and 30 minutes later we'd be driving along the shores of the loch with the Ben towering above us, on our way to Oban or Fort William or Inveraray or wherever.
I never read Tolkien as a child, so it never had that kind of significance for me, but just to see the mountain sitting there, day after day, in all kinds of weather, did stir my imagination for the better.

For some curious reason, Gey, your comment was in my Spam file, which I normally delete without checking. Just as well I checked on this occasion. Yes, we were lucky kids back then, eh? My new town was not only surrounded by greenbelt, but it also had large green areas within the town. Sadly, they're fast disappearing.

That's quite a view. Enough to fire the imagination of any child.

I wish I had half as much imagination now as I had then, Martin. And half as many years on the clock.

Aye Kid,thats a great shot right enough!Next time try and get a couple of extra shots off.I mean the 9mm variety,aimed squarely at the aforementioned little runts you described.....If only...sigh!

Wonderful photograph. Is there snow on the mountain or just sun glare?


Children have no manners nowdays but what can you do?

Yes, there's snow on the mountain. I'd like to get a better photo of it one day, as I wasn't using a tripod and it's not quite as sharp as I'd like.

As for manners, if only parents would teach their kids some, eh?