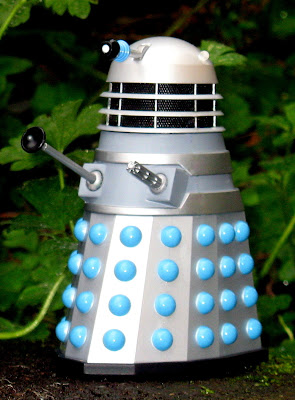 I've just learned the sad news that RAY CUSICK, designer of TERRY NATION's iconic mutant monsters The DALEKS, died on February 21st at the age of 84.  All children owe him a huge debt of gratitude for enriching their childhoods with his perfect realisation of DOCTOR WHO's scary inhabitants of the planet SKARO.

Sadly, he never got rich from his inspired interpretation of Nation's description of the transformed KALEDS, as he was a BBC employee at the time and it was just another day's work for him.  Apparently he received a £100 bonus as a gesture of appreciation from Auntie Beeb, but considering the many millions derived from Dalek merchandise, it seems they didn't appreciate him as much as he deserved.

Raymond himself never made an issue of it though, and was content merely to be recognised as the designer of the metal-cased mutants.  Mr Cusick is survived by two daughters, seven grandchildren and several million Daleks. 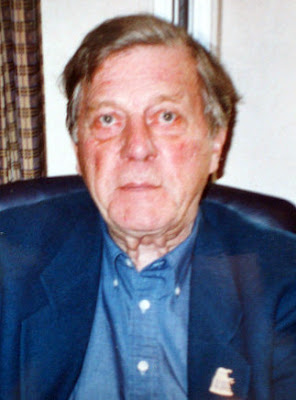 Kid, I read somewhere (lthat old chestnut) that Tony Hancock claimed to be originator of the basic concept of the Daleks. Terry Nation was his script writer at ITV post Galton and Simpson which gives it a tiny chance of being in the realms of being true.. I can happily picture Tony in character telling Sid James, 'he's only gone and stolen me little robots!' What a killing Sid could have made.

Amazing that trivia you can stumble across on the net.

Amazing! I hadn't heard that one - must look it up.