Time again to demonstrate my justly-famed generous nature
by bestowing upon all you panting pictophiles yet another round of
sensational SPIDER-MAN COMICS WEEKLY covers and images
from the early 1970s.  "Why am I so nice to everyone?" I often wonder,
and the only answer I can come up with is that, basically, I'm a nice guy.
Of course, you'd likely get an argument about that from some of those
who know me better than you do, but don't listen to them.  They're
lucky that I still occasionally slide some toast under the door of
the cellar I've got them locked up in.

Anyway that's enough way-out waffle from me - I now unleash
an array of awesome images from the vast and vaunted vaults of
my very own personal collection for all you frantic fans to slobber
and drool over.  Don't be greedy now - take things slowly and
enjoy them one at a time.

And remember - today is February 10th - 40 years to the day
(which was a Saturday back in 1973) since SMCW first landed
on newsagents' shelves the length and breadth of Britain.

It's snowing outside as I type this - and it was snowing 40 years
ago as I chapped a friend's door to show him my copy of the newly
purchased SMCW #1.  He wasn't up and out of bed yet - and because
his mother was too ignorant to invite me in to wait (as mine would've
done in his case), I took shelter in one of a row of under-construction
lock-ups around the corner from his house and waited for him to get
up and greet the day.  He had only moved to the house a week or so
before and, being quite a distance from mine, I was reluctant to
make the return journey so soon after arriving.

As I stood in that grey, doorless lock-up while the flakes swirled
outside, I again browsed through my latest comic acquisition, bought
that snowy Saturday morning from my local newsagent's.  I have other
memories associated with other copies of that same first issue, obtained
at different times and under different circumstances, but that's the one
which is foremost in my mind as I watch the snowflakes dancing out-
side my window - just as they danced beyond the opening of that
cold and cheerless lock-up four decades ago today. 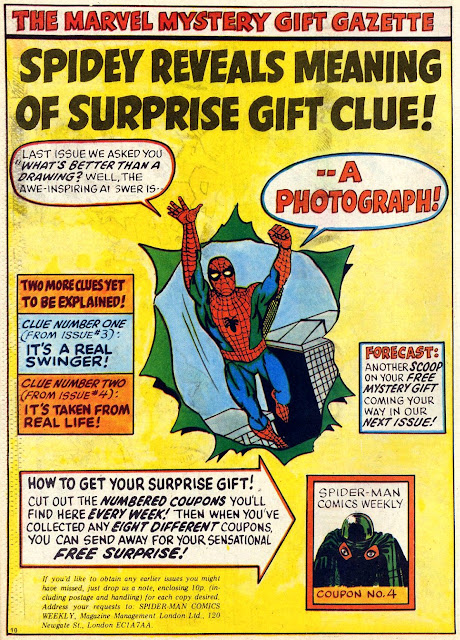 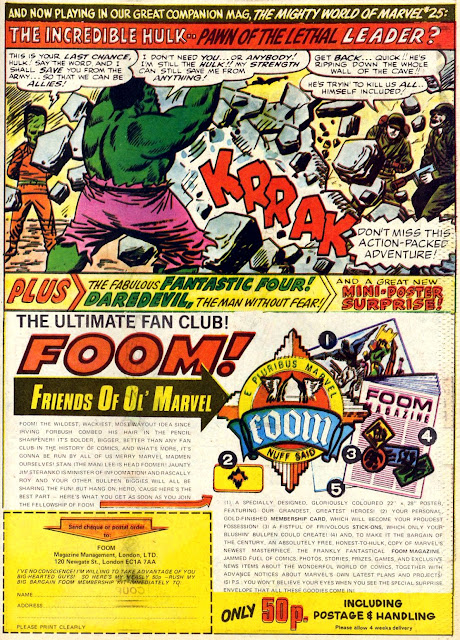 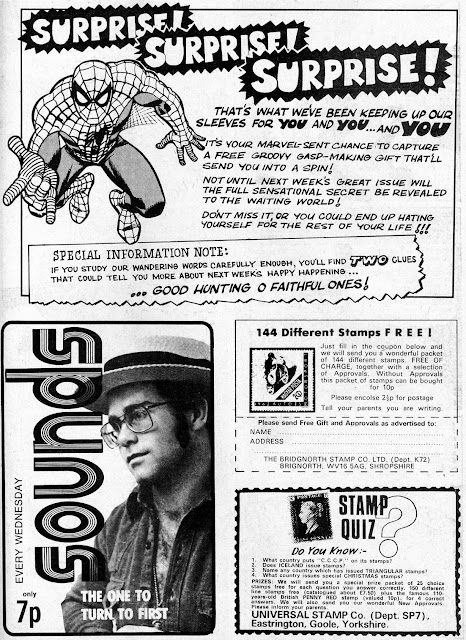 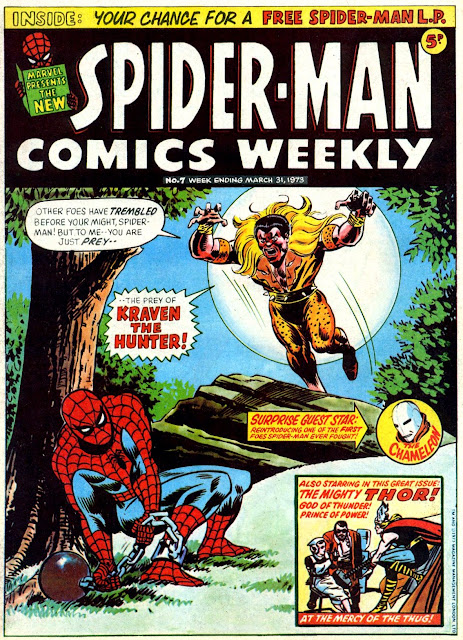 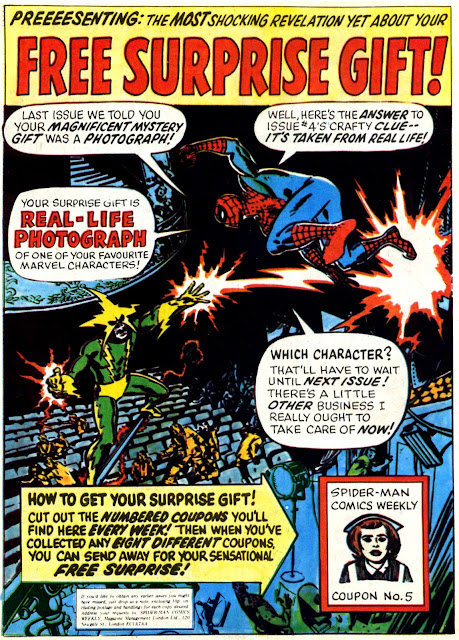 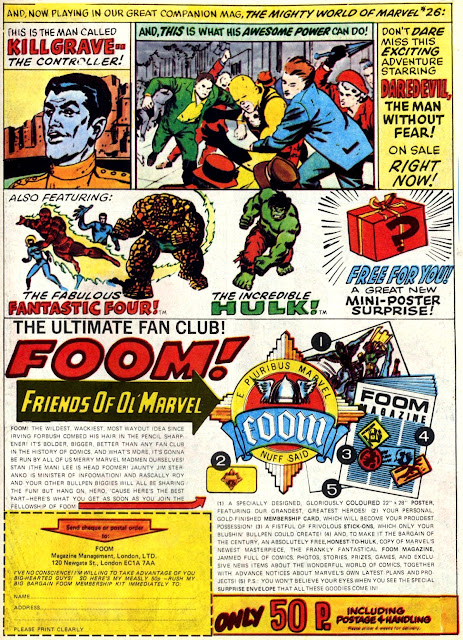 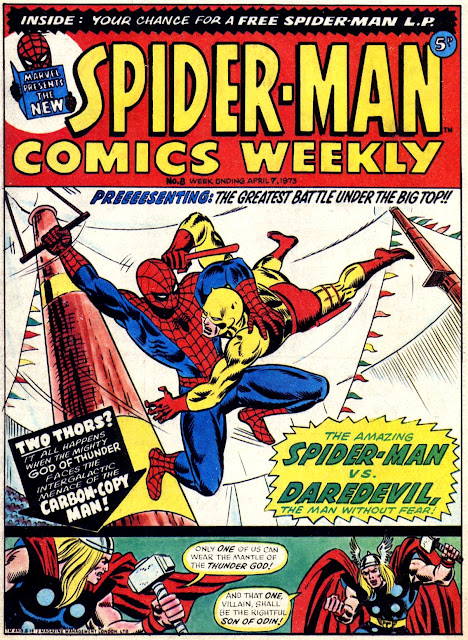 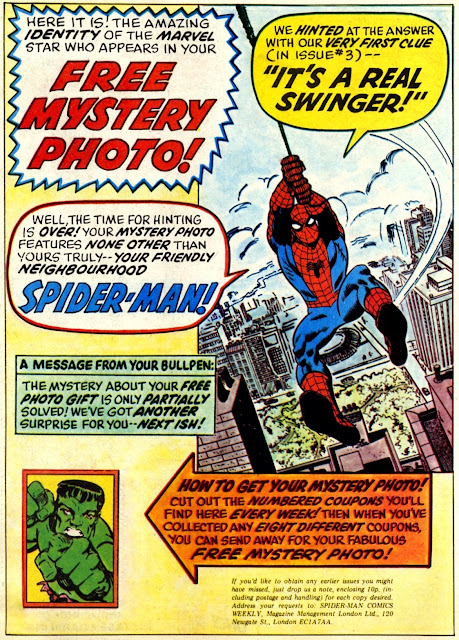 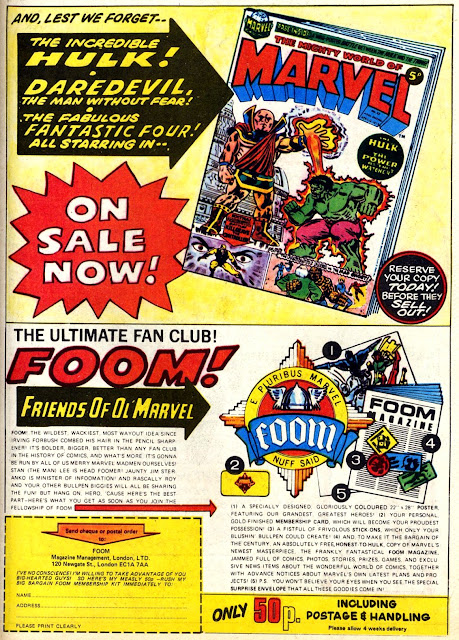 Hang about - they advertised, at length and with a ridiculous build up, about buying a photo of Spider-Man...and wouldn't even show the blessed thing in the ad??!!

They knew how to tease the readers, that's for sure. However, a picture of the photo-poster was shown a few issues later.