Okay, hands up all those who remember Jet.  (I think there was also an iced lolly by the same name at some stage, but it's the comic I'm referring to today.)  Like Thunder before it, it also lasted for only 22 issues, but in memory it seems it was around for longer.  You see, I have a distinct recollection of reading it at the dining table before before going to school (having bought it from the shops across the road first thing in the morning) on quite a few occasions, but perhaps I've merely been remembering the same one or two instances innumerable times over since then.  Leaves me wondering how many other times I might've done that, giving me the impression that some things happened more often than they did.

Be that as it may, I thought I'd belatedly direct your attention to the first collected edition of Von Hoffman's Invasion, a strip which appeared in Jet in 1971, and continued in the pages of Buster when the two comics were merged at the conclusion of Jet's short span.  I only received my copy today (dragged my heels a bit there), but it takes me right back to the house and neighbourhood where I was living at the time - and, of course, Eric Bradbury's art is always wonderful to behold.  I was lucky enough to letter his art on a few occasions during my freelance comics career, and it was a thrill to 'connect' with an artist who's drawn so many strips I'd read as a boy.

You may think I'm doing a 'Stan Lee' here, but a good while before Rebellion acquired the rights to so many UK classic comics characters from yesteryear, I lamented here on Crivens that publishers didn't seem to view the vast archives of British strips from the past as being worth anything in the way that US strips are, and suggested that it would be nice if such treasures (and I used that very word) were made available in handsome collected editions.  Then arose Treasury Of British Comics and the very thing I wished for came true.  Naturally, I like to think that they got the idea from me.  (Well, it's not totally impossible that I helped plant the seed.  Shut up - I prefer my version.)

Anyway, if you remember Jet, you might want to consider adding this volume to your collection - it's still available. 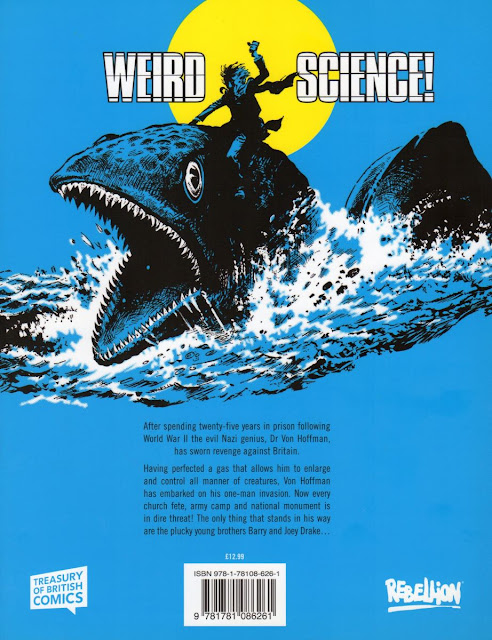 I wasn't that impressed with Jet at the time but I always liked Von Hoffman's invasion (and Faceache) . I seem to remember there was a TV advert for Jet highlighting Von Hoffman( or have I imagined that?). I may look at picking it up once I clear some room. I would like to see a "White Eyes" book reprinting that series from Lion and Thunder, great underrated strip imho.

I don't think I recall seeing that TV advert, McS, but maybe I've just forgotten. I'd have to see it now to know for sure whether or not I'd seen it back then. I'd like to see Cursitor Doom from Smash!, plus the Simon Test stories in collected editions, plus some more Janus Stark (there's been 2 slim volumes already). Can't wait to receive my Adam Eterno volume in May.