If not for a boy called William Nodwell, I may never have learned of such classic comics characters as The Spider, The Steel Claw, Zip Nolan, Charlie Peace, Robot Archie, T.H.U.N.D.E.R Agents, and probably a few others.  Or I certainly wouldn't have known about them until much later in my life than I did.  The reason for this was because it was when my mother and brother (and perhaps occasionally my father) and myself were visiting William's parents, whose house was in the row across from the one in which we'd once resided between the years 1960-'64, that I got to read William's comics.  These visits took place at occasional intervals between 1965-'70, and perhaps even continued beyond that, though, if so, me and my brother were no longer in attendance and my mother probably made such visits on her own.

Unnecessary detail as far as you're concerned I know, but remembering such trivia helps me keep such characters in the context of their times as far as my experience of them goes.  It's odd to think that, because of the circumstances, I probably associate the above strips more (or at least as much) with a neighbourhood I was then no longer living in, rather than the one I was living in at the time.  But what's all that got to do with the price of cheese?  Nothing, but when my hardback collected edition of The Spider arrived at Castel Crivens this morning, I couldn't help but feel my memories drawn back to the time when I first laid eyes on him in the Nodwell family home, lo, all those many decades ago.

I shouldn't have to give you the hard-sell on this volume, should I?  It's classic British adventure at its best, with a little help from American writer Jerry Siegel, who along with his friend Joe Shuster, created Superman back around 1933 or '34.  There's a long-standing rumour that Jerry created The Spider, but this book reveals that he only took over writing the strip for a while after co-creator (with artist Reg Bunn) Ted Cowan had written the first two complete stories.  In fact, it was Jerry who approached the publishers of Lion comic, after seeing a few issues and being impressed with The Spider.

Anyway, the book is officially available from the 14th, though I think the limited edition hardback with a superb cover by Chris Weston (above) might have sold out, so you may have to settle for the softcover edition with a different cover (if that isn't also sold out - advance orders, y'see).  Either way, what's not to like?  Check out the Treasury Of British Comics website for details.

Update: Just checked - both editions are now listed on the site, though I could see no sign of them when I wrote this post earlier. 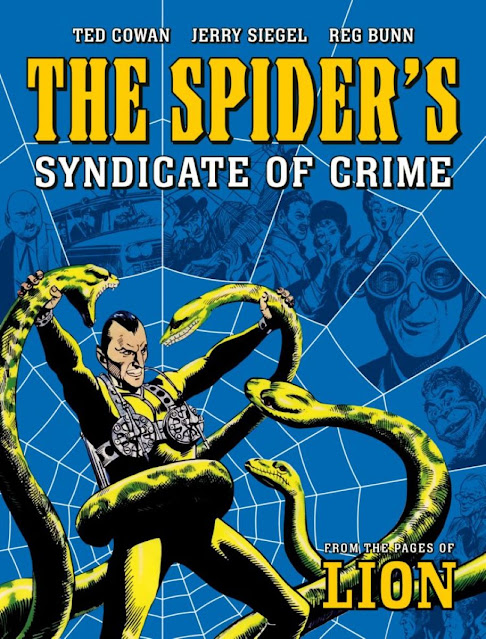 By mistake ordered my copy from Amazon, its been delayed until 21st at least. Wish I had known about the direct site.

That happened to me with The Trigan Empire Vol 2, which I ordered from Waterstones just before Lockdown hit. I cancelled and ordered it direct from Rebellion and received it not long after. At least now you know for any future orders.

Thanks to you I managed to cancel the Amazon order. Have now ordered via the link above. CHEERS

Hopefully it will be with you before you know it.

So do you keep buying new bookshelves to house all the new books coming in the post?

My plan one day is to have a bookcase built against an entire back wall, with mirrored sliding doors, CJ. At the moment, I just rearrange things to find space.