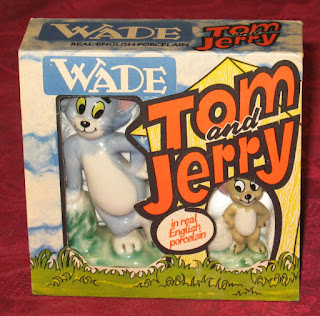 Assuming that my memory of events is correct, one of the joys of being a teenager - or even a kid for that matter - in the UK back in the '70s, was a regular Monday to Friday evening double bill (usually) of Tom & Jerry cartoons on BBC 1, right after (or was it before?) a current affairs programme called Nationwide.  Has there ever been consistently funnier cartoons than T&J?  I think not.  I happen to have every classic (by that I mean the well-drawn ones) Tom & Jerry cartoon in a boxed DVD set, though it's been years since I watched them.  In fact, I think I only viewed a few before putting them away, with the intention of returning to them before too long.  That was probably around 14 or 15 years ago and I still haven't found time to dig them out again.  One day soon, I hope.

Anyway, because I'm a Tom & Jerry fan (can there be anyone who isn't?), I recently picked up this porcelain set by Wade to add to my collection.  I don't have too many pieces of T&J merchandise - a pair of Marx wind-up figures, a couple of diecast cars (by Ertyl I think) that were tie-ins to a movie back in the '90s, and also a couple of 'furry' figures of the duo, but that's about it.  Anyway, the Wade figures are excellent, so I thought I'd share them with you here.  They're regularly available on ebay, but usually without the box, so consider yourselves the recipients of a rare treat in seeing the complete package.

Are you Tom & Jerry fans, dear readers?  Then wax eloquent on why you like them so much - if you'd be so good.  In fact, to widen the scope, what do you consider the funniest cartoons of all time?  Bugs Bunny was always good, as was the Pink Panther - what were your favourites? 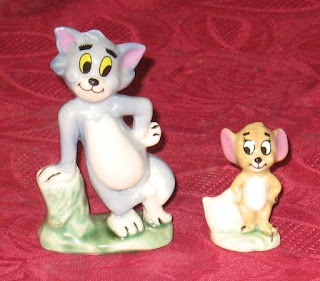