A KING'S REACH SHOULD ALWAYS EXCEED HIS GRASP...

I really enjoyed my regular visits to King's Reach Tower in London's Stamford Street for the first two years of my comics career.  It was a great building and I couldn't help but feel important whenever I walked through its exalted portals - or revolving doors actually, if memory serves.  Then the Youth Group moved along the road to Irwin House, and I remember holding the front door open for John Sanders as he entered one afternoon when myself, Kevin Brighton (art assistant), and Marc Jung (Buster's assistant editor) were going out for lunch, up to the cafeteria in KRT.  Mr. Sanders looked as if he'd imbibed a little too much, and I later learned it was probably due to him drowning his sorrows when a new football magazine he'd already got the green light for was cancelled at very little notice.  Apart from maybe a couple of nods and a polite "Morning", or seeing him wandering around corridors from time to time, that was my total experience of the gentleman in my time freelancing for the company.
Now, having just read his autobiographical account of his career in comics, I feel like I know him a little better, and I found his book an enthralling, behind-the-scenes glimpse at his involvement in iconic comics like 2000 A.D., Action, Misty, Starlord, and numerous other titles he had a guiding hand in during IPC's glory days before Robert Maxwell got his hands on the Youth Group and, in pretty short order, dismantled it until it was a pale shadow of its former self.  If you're interested in such history, you're sure to enjoy this volume as much as I did, and it sheds light on such topics as creators rights, ownership of artwork (and reprint fees, or the lack of them), and what goes on in the development of a comic up until the point of fruition.  The logic of the 'hatch, match, and despatch' philosophy is explained, and it certainly seemed to work, otherwise it would've been abandoned pretty early on and not repeated for so many years.
A couple of pedant's points, but Esther Rantzen is referred to as Esther Ransom in the book (that's life I suppose - see what I did there?), and 'minuscule' is spelt 'miniscule', but that's a tiny error that a lot of us have made when we're typing too fast, so nothing to get upset about.  I always had the impression that the Youth Group was sold to Maxwell before it moved from Irwin House to Greater London House, but I assume Mr. Sanders will know these facts better than me, so I'm not going to argue about it.  One thing that strikes me though is, had Mr. Sanders not planted the idea in IPC's mind to sell the Youth Group, Maxwell would never have had the chance to buy it.  Does the author ever feel that he may've been partly responsible in hastening the Youth Group's doom?
I don't see the book on the Treasury Of British Comics website, but perhaps it's available on the 2000 A.D. store.  If not, you can order it via one of various Internet sites, as I did.  Definitely worth a read. 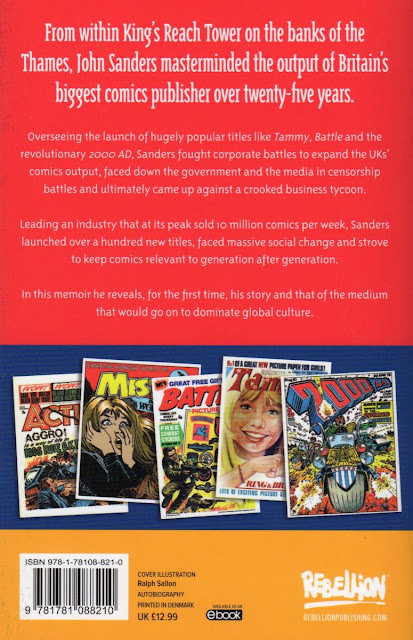 You made a "tiny error that a lot of us have made when we're typing too fast" yourself, Kid - you describe Marc Jung as Buster's depute editor :)

That's how we Scots spell the word, CJ, so no error this time.

As I said in my response to your comment in the previous post, I used the word deliberately, CJ, wasn't typing too fast. I've seen the word used as a noun before, hence me altering all my uses of the word 'deputy' to 'depute'. Having now searched for it used in that context elsewhere, I can't find an example, so even if it does turn out to be the wrong word, I used it on purpose. So there - rassssppppp!!!!

I know - I'll change it to assistant - problem solved.

In Scotland, we have a Procurator Fiscal Depute, which I've heard people pronounce as 'deputy', but I suppose it could be wrong. Anyone know for sure?

Well, I only mentioned it, Kid, because it's so rare that you make any mistakes!

No, looks like it's pronounced depute, as in depyute. Like I say though, I used it deliberately (thinking it was right). If you type 'depute' in my blog's search box, you'll find six other examples of me using it in the same way, mostly in reference to Marc Jung, and also a couple for Alan McKenzie. I'll change them all to 'assistant' in a day or two. Wish I could remember where I heard it pronounced 'deputy'.

Ah, but if I use the word intentionally, CJ, my choice of the word isn't by mistake, even if my understanding of it isn't accurate. Gosh, I should be a lawyer - but not a depute/deputy one.