A 'FAVOURITE COMICS OF THE PAST' REPOST: SWAMP THING #1...

Here's yet another pulsating post that received no comments at the time of it's original publication.  How could such great artwork go unheeded?  Or was it mainly my personal reminiscences that failed to inspire you Crivvies to respond?  Whichever, here's your chance to make up for your woeful neglect of what was part 43 of my 'Favourite Comics Of The Past' series.  Surely it's one of your favourite comics too?  Tell us why.
******
One of my favourite newsagent's back in the '70s was an R.S. McCOLL's in the Old Village quarter of my town.  It was situated next door to an old-fashioned tearoom called The WILLOW, which was like a LYONS tearoom from the 1950s.  Nowadays, what was The Willow is part of a Chinese or Indian restaurant, and the newsagent's is now a GREGGS, both of whose original incarnations I miss in equal measure.  Roll on that Lottery win so that I can buy and restore them to their former glory.
Just some of the comics I recall buying in that particular McColl's were The DEMON #1, SECRET ORIGINS #1, JOURNEY Into MYSTERY Annual #1, KULL The CONQUEROR #1, as well as this post's favourite comic of the past - SWAMP THING #1.  Doubtless there were many other mags (some of them British) I bought in that much-missed shop, but these are the ones which spring to mind at this moment.  So let's take a look at some of the pages from that classic issue of Swamp Thing - comics don't get any better than this.
And if you have any memories of (or observations on) this magnificent mag, then share them with the rest of us. 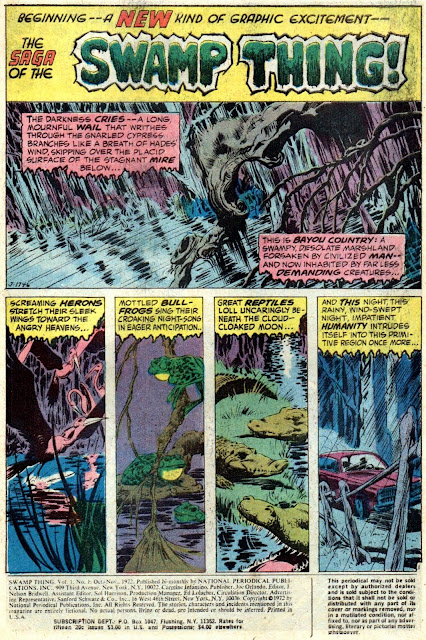 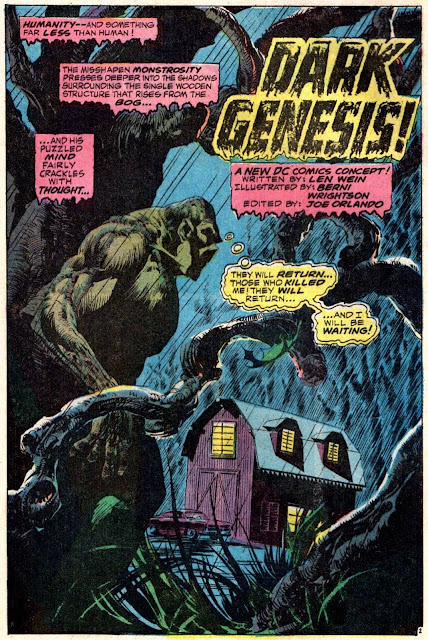 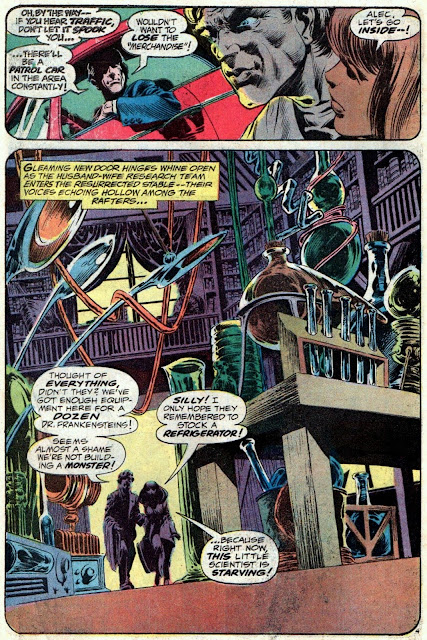 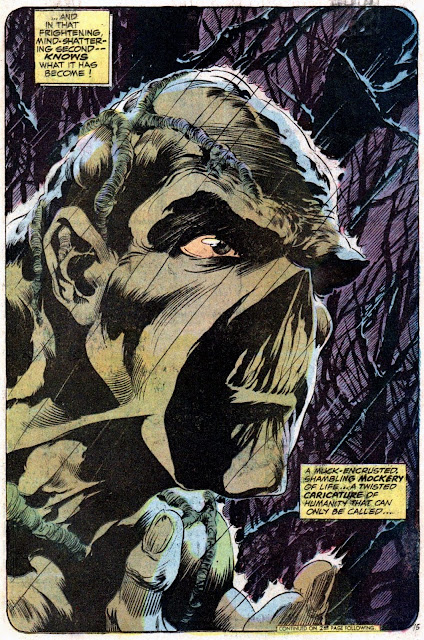 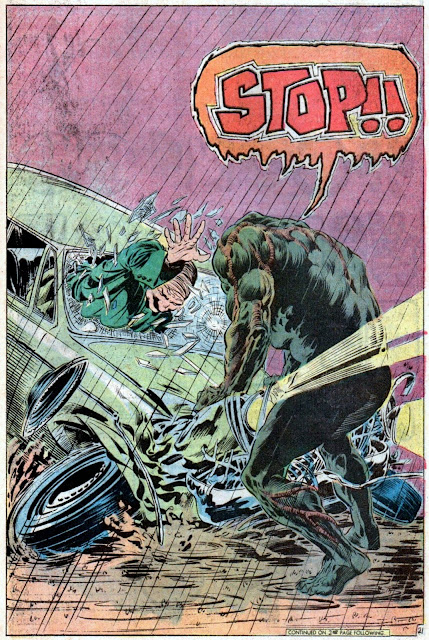 And below is a pic from the '50s of the tearoom and newsagent's. The Willow's premises had a windowed extension just out of view to the left of the tree to accommodate more tables and chairs. 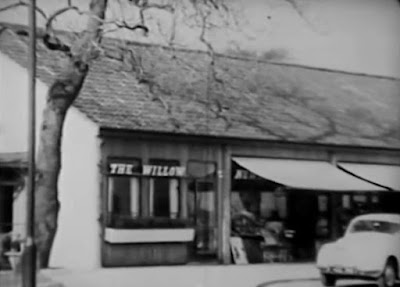 I was cool to the idea of Swamp Thing when it first hit, not getting an issue until six and then only that one for quite a time. Later in the 70's I got the reprints in DC Special and fell in love with it, though only the classic Wein-Wrightson stuff. Loving the new reprints generally speaking, especially the Nestor Redondo art and the oddball crossovers with the Challengers of the Unknown and suchlike. I only three weeks ago bought the Alan Moore version and have plans to at long last read these comics later this summer that folks have been raving about for decades.

I think the Wein/Wrightson/Redondo stuff is great, RJ, and some of the Moore stuff was good too. However, I prefer the original early issues as I though Moore was a bit too self-indulgent with some of his stories. I've got a complete run of the original series, plus several reprints to boot. Just can't stop myself.

My first issue of Swamp Thing was issue 8 "The lurker in tunnel 13" brilliant stuff. Unfortunately that was the only Wrightson issue I managed to see and buy at the time. However I did manage to pick up a few of the brilliant Nestor Redondo issues which are imho up there with Berni's work. I think that nSwamp Thing has been the most consistent comic in years and I even pick up the odd new issue when I see them. As good as the new stuff is for me those first 24 issues were the best along with Alan Moore's run which I really enjoyed

I was lucky enough to start with the first few issues in the sequence they were published, McS, but I'd have to sit and think about what number I stopped at when the comic seemed to disappear from my local newsagents. Not that it matters as, inspired by The Saga Of The Swamp Thing in the early '80s, I started reacquiring not only the '70s issues I'd once had, but the ones I missed at the time. There's one issue by Alan Moore that I particularly like, but I forget the number. I went off the series a bit when the Comics Code box disappeared from the cover and it seemed as if he was allowed to do anything he liked.

I liked 90% of Alan Moore's Swamp Thing and a favourite issue of mine was "Pog" in issue 32 of the Saga of the Swamp Thing. I think this was a homage to Walt Kelly's Pogo character ( which I'm not that aware of) but the art was cute (cartoony) and the story was very clever. I know what you mean he seemed to get a bit into himself but to be fair (imho at least) he was a great comic book story teller.

I liked that one as well, and another was where the Swamp Thing recovers Alec Holland's skeleton from the swamp. (Or was it the same ish?) Very touching - though I hated the idea that Swampy was merely some kind of receptacle for 'echoes' of Holland's memory, not Holland himself. Len Wein sort of ignored that idea when he did his six part series a few years back.

I think I've told this story before, but here goes....I was 15 when I went to the Studio Signing at Forbidden Planet (1979) and cheekily dumped all 10 issues of Swampy in front of Berni Wrightson (who laid them all in a line and said 'I'll sign them on a production line, cos that's how I drew them!'). When he got to number 9 I asked Mike Kaluta to sign it, as I'd read he'd inked some pages (you can see a rougher finish on some pages)....He blankly looked at me and said 'Errr....It wasn't me'....cue me getting rather red-faced! Luckily one seat further away was Jeff Jones who saved my bacon by reaching over and signing it saying 'Oh yes, that was me!' Happy days!

Great story, V&S, and it must make these issues all the more special to you, assuming you still have them. Signed copies of Swamp Thing - wow! Must be worth quite a bit by now, but they're sentimental value is beyond price.

I sold most of my comics a couple of years ago, as they took up a LOT of room in the house, and with reprints of so many classics available these days, the need for browning originals was no longer the only way to enjoy these stories. It was a bit of a wrench at the time, but was probably the right thing to do. I've still got got most of my 'art books' so still have the signed copy of The Studio book to remind me of that day!

I know what you mean, V&S, but I'd miss the ads and the smell of the paper if I sold my originals. It's not always just the stories that impressed us, eh? It was often the package they were presented in. Having said that, I think I may have to follow your example before too long - at least with some comics, not all.

You're absolutely right Kid, I'd even go as far as to say the whole BUYING experience is the sort of thing that I enjoyed most about buying comics back in the 70s (even if all the comics weren't classics). Most Saturdays were spent jumping on busses to go to places and finding obscure newsagents then being overjoyed at finding something 'different' be it a pile of Marvel Curtis B&W magazines or (and I remember exactly where this shop was) a spinner rack full of Atlas/Seaboard comics. The randomness was all part of the fun.

I didn't use the bus to travel between the different neighbourhoods, V&S, it was Shanks's pony for me. I knew all the shortcuts though, and it was like setting out on an adventure because you never knew which newsagent was going to have which comics, as there never seemed to be much consistency when it came to stock. Happy days.