A 'FAVOURITE COMICS OF THE PAST' REPOST: 'ENCHANTED TIMES'...


Yet another previously published post that received no comments first time around, Crivvies.  Let's hope it can capture your interest enough on its second outing to inspire some input from you.  Don't let me down.
******
And here's another little belter of a comic from out of the dim and distant, fog-enshrouded mists of time.  Actually, that last bit's a lie - because I can recall having my original copy of this comic as if it were only... well, not quite yesterday, but last week at least.  That's due to the fact that, not long after acquiring it, I was ill and confined to my bed for a day or two, and I remember re-reading the comic tucked up in bed with only a bedside light to illuminate my literary pursuits. 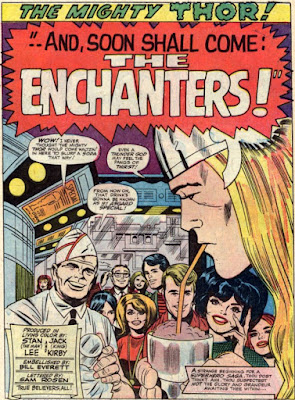 Feeling slightly better after finishing #143 of The MIGHTY THOR's Asgardian adventures, I got out of bed with the intention of going downstairs to the bosom of my family.  My brother assisted me, but I took a sudden dizzy turn at the top of the stairs and had to be returned to a horizontal position under the warm, cosy, enveloping blankets I had just abandoned mere moments before.  No wonder the issue is burned into my memory - who would ever forget a night like that? 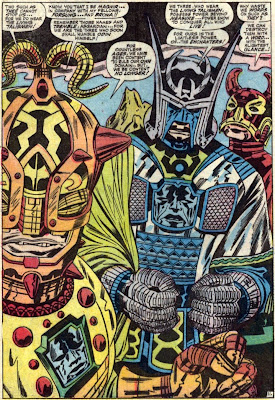 This tale was reprinted in SMASH! around the same time I had the American original, and I recall comparing the layout in the British comic to the U.S. one.  (MARVEL strips were resized, two pages to one, for their U.K. reprintings in three of the five POWER COMICS from ODHAMS PRESS, of which Smash! was by this time the sole survivor.)  Many years later, I learned that VINCE COLLETTA had started to ink this issue, but for some reason BILL EVERETT took over.  If you look carefully at the splash page, you can see the mix of the two different styles. 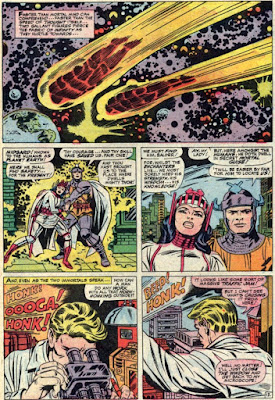 The issue was also later reprinted in ORIGINS Of MARVEL COMICS in 1974, and when I got my hands on a copy soon after it became available in Britain in '75, I was overjoyed to once again see this fondly-recalled tale from my boyhood.  True, only six years or so had passed since I'd owned the original comicbook, but that was over one third of my life away at that point and consequently seemed much longer than the same period of time would likely appear to me nowadays.  (All to do with proportions I guess, but what do I know?) 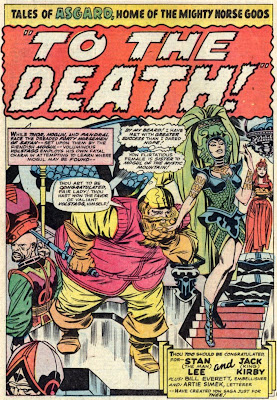 The scans you see here are from a copy I obtained more years ago than I care (or am able) to remember.  It's certainly close to half my life away anyway.  One look at that cover and I'm a child once more, back in my bedroom in Belmont again, reading the comic by the soft light of a lamp, with the outline of the room's few furnishings faintly visible as they stand guard in the gloom beyond.  (So much for those who say my childhood is behind me; truth is, it never truly left me.  It's the same for everyone, I imagine.)
Anyway, feel free to forget my self-indulgent waffle - just so long as you enjoy the scans herewith presented and are perhaps reminded of your own first, long-ago encounter with this cataclysmic comic, then I can savour the satisfaction that comes from a job well done.
Altogether now: "For Odin, for Asgard!"
Posted by Kid at Friday, April 09, 2021

Kid, it would be interesting if you'd tell us exactly WHEN the original post appeared which might explain why it received no comments. Perhaps some of us weren't yet reading Crivens at that time.

Monday 6th February 2012, CJ. Were you reading Crivens then? Thing is, other posts from the same period were receiving comments, so it's odd that a few didn't - even if just to say they were cr*p.

No, I didn't start reading Crivens till late 2013 - have you heard the news that Prince Phillip has died? By a weird coincidence February 6th 2012 was the 60th anniversary of the Queen's accession.

Yes, I just saw it on the news when I was making a cuppa. No, it wasn't a coincidence, CJ - she carefully planned her accession to coincide with my post 60 years later. Quite forward thinking is the Queen.

Thor was one of my favourite Marvel comics during Kirby's run around this time. It was so inventive and full of great characters and storylines . Sadly I only read these tales in the UK Spiderman Comics Weekly from which I vividly remember that splash page. After the John Buscema run on Thor the character imho totally lost his way. I'm not sure when I started reading Crivens! but your so prolific with posts maybe there were a lot at this time and folk just missed it.

That's a possibility, McS. Even I found it hard to keep track of every post I wrote. Talking of Thor (which we are), I wish Walt Simonson's run had been restricted to writing it, with John Buscema drawing it. Manhunter aside, I've never been too impressed by WS's artwork.

Magnir, forsung and Brona. I don’t know if they are real but those are awesome Norse bad guy names and a terrific Kirby panel. One of my favorite issues along with Hercules and Mangog.

The Enchanters made a comeback in the underrated 90s Thor series written by Dan Jurgens, which had a fill-in issue (#9, I believe) drawn by John Buscema and Jerry Ordway. And yes, it is as gorgeous as you're probably imagining.

The latter part of Simonson's Thor is interesting (to me, anyway) as its drawn by Sal Buscema, who seemed to adapt his style to be slightly Simonsonesque. It really worked for me.

Kid, have you seen Simonson's art in the adaptation of Alien? I think it's one of his best pieces of work.

Yeah, PS, the Hercules saga in particular was brilliant, and I enjoyed the Mangog run as well. I still can't help wondering if they'd have made the same impact (on me anyway) if Jack had scripted them instead of Stan.

I should have those issues, DS, but for the life of me, I don't remember them. Talking of Sal Buscema, he also drew an '80s Eternals 12 issue maxi-series in the style of Walt Simonson, but I think I preferred his own style when he was putting more into it than he seemed to be later on in his career.

Oops! Pressed 'publish' too soon. In answer to your question, I don't recall whether I've ever seen his Alien adaptation or not, DS. I'll keep an eye out for it.