A 'FAVOURITE COMICS OF THE PAST' REPOST: THE AMAZING SPIDER-MAN ANNUAL #18...

I was buying a lot of comics in 1984 - from any place I could get 'em.  Newsagents, comicbook shops, Glasgow's Virgin Mega-Store; you name it, if it sold comic-books, I was probably in there at some stage scooping them up.  The AMAZING SPIDER-MAN ANNUAL #18 was one I purchased from R.S. McColl's in the main shopping centre of my home town.  Its primary attraction for me was that it was scripted by STAN LEE (from a TOM DeFALCO plot) and that Spidey was drawn in an imitation DITKO-style by RON FRENZ. 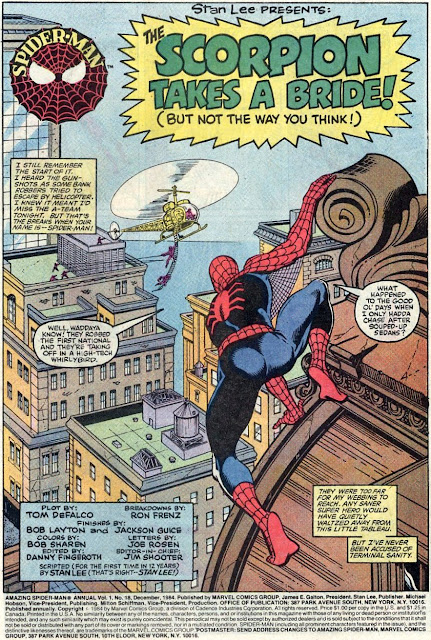 What an utter joy it was to read this tale - it simply sang, such is Stan's mastery of words when it comes to making a story move along at a rip-roaring pace.  I enjoyed it so much that I actually read it again the next day, and could only rue the fact that Stan didn't write more often.  Say what you like about 'The Man', but he sure knows how to inject an infectious sense of fun and adventure into almost any tale and this one was certainly no exception.  Over the years, whenever I've wanted to re-experience the thrill of seeing just how well a superhero comic can be written, I've returned to this issue again and again. 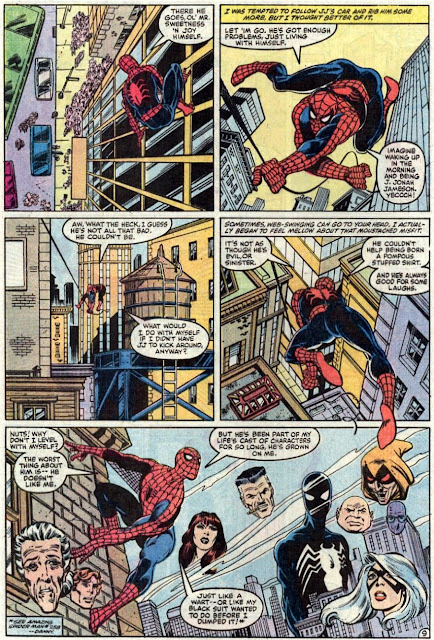 I know I've bored you with the topic of time before, but it really amazes me that I first read this story a kick-in-the-pants off 40 years ago - it just doesn't seem like it. The R.S. McColl's shop I acquired it from is long, long-gone, the premises having housed several different businesses in the intervening years between then and now. Yet, when I look at the cover, I can clearly remember buying it as if it were only a couple of weeks back, so distinct is the memory of it in my mind. 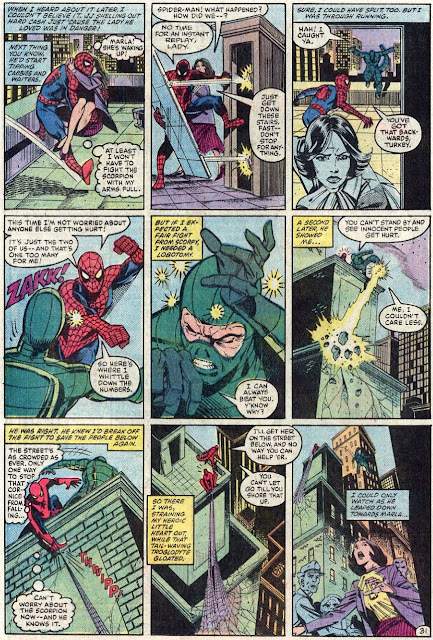 As I said, back in the early '80s, I was buying a whole lot of comics, but I only regarded two of my regular titles as being absolute 'must-haves'.  The first was The FANTASTIC FOUR, written and drawn by JOHN BYRNE, and the second was MARVEL TALES, reprinting the classic run of Lee/Ditko Spider-Man stories.  These were the 'dynamic duo' of the monthly Marvel output, but occasionally there would be an issue of another mag which was up there with the best of them.  Such a one was The Amazing Spider-Man Annual #18. 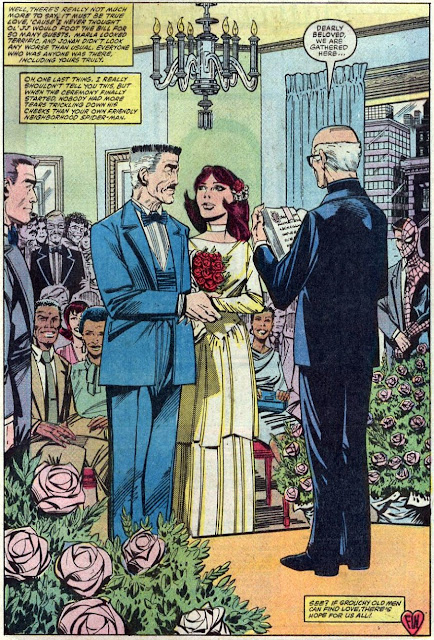 I can honestly say that my copy is in practically the same condition as the day I bought it, which is more than I can say about me.  It's at times like this that I find myself wishing I had a hideous portrait up in the attic of the same mystical properties as Dorian Gray's.  Of course, some wag is sure to say that any portrait of me is bound to be hideous.  It reminds me of the time an artist asked his subject whether he thought his newly-completed portrait did him justice.  "Its not justice I require," said the eminent subject - "it's mercy!"
And on that note, I'll leave you to look up the price of the above ish on ebay.  If you don't already have it in your collection, now's the time to track it down and treat yourself to a fun read.
Posted by Kid at Saturday, April 10, 2021

Yup, but remember - this is a repost, so when I first published the post in 2012, 1984 was yet 'a kick-in-the-pants' off 30 years ago'. However, I'll update it so that you won't needlessly fret over it, CJ. I wouldn't want you to have that kind of worry in your life. Which number of MWOM did you start with?

Oops, I forgot it was a repost - my apologies, Kid!

I don't remember which number of MWOM I started with in 2007 but I'd seen the Panini CEs in WH Smith's for years and I finally took the plunge and bought one to see what modern Marvel comics were like. And after I bought that first one I was hooked again and I've been buying Marvel comics off and on ever since. Just two days ago I bought the e-book version of "Shang-Chi" Volume 1 which collects #1-5 of the 2020 comic (this new version is no longer called Master Of Kung-Fu). I haven't read it yet but I'm hoping to read it tomorrow.

No need to apologise, CJ - nice to know someone's paying attention. I've got the complete edition of the original Shang-Chi stories, CJ, even though I'd only ever read some of the ones that were reprinted in the UK Avengers weekly. Nice to see them all in colour. I do have the original US edition that Shang-Chi appeared in as well.

I missed this as I had stopped buying most Marvel, DC comics by 1984 only picking up the odd Conan, Swamp Thing etc comic as I was more into titles like Love and Rockets at that time . I will keep an eye out for it if I see it around though if Stan's story is good.

Stan only scripted it, McS, not plotted it (that was Tom DeFalco), but it sings like a dream. And Ron Frenz's Ditko 'homage' (as far as positioning Spidey's figure goes) is quite impressive. (Okay, let's be honest - they're 'swipes', but they're good swipes.)