MARVEL MUSINGS ON THE DEMISE OF MWOM...


When The MIGHTY WORLD Of MARVEL first hit the shops on September 30th 1972, I was a (nearly) 14 year-old instant fan. Having been a hopeless nostalgist from around the age of 5, it gave me the chance to relive almost half my life away to when I'd read the same stories in the ODHAMS PRESS POWER COMICS in the '60s.  (And if you're a true believer, you'll know that they consisted of WHAM!, SMASH!, POW!, FANTASTIC, and TERRIFIC.)

I loved MWOM and SPIDER-MAN COMICS WEEKLY (SMCW), and when I look at the early matt-paper covered issues today, I feel like I'm 14 again.  There's something about the colour (whether full or spot), that has a certain charm. However, much as I love them, it has to be admitted that they were a bit 'piecemeal' in the way they were put together.  Some of the lettering amendments* (changing US spelling to UK), and the way the panels were cropped (sometimes removing border lines completely), were amateurish in the extreme.

That such a big outfit as Marvel could put out such a 'technically' substandard products is difficult to understand.  I'm not talking about the stories of course, just the way they were butchered to accommodate the UK page size.  Obviously, the editor has to shoulder the blame for such inadequacies, but it wasn't the nominal UK editor's fault, as she/he was really just a handler at our end.  The real fault lies in the States, where the package was assembled and then sent over here to be published.

And when the switch to glossy covers with muddy interiors happened, why wasn't it sorted out sooner?  Whoever was responsible in America must've been asleep at the wheel not to notice that panel detail was often obliterated by the over-zealous application of 'Zipatone' - though, to be fair, it was really inferior printing that rendered it that way.  However, the US editor should have noticed these problems and sorted them out sooner.

Truth to tell, the Power Comics hadn't been much better (and often worse) in the way they re-sized their Marvel material.  Panels were extended and drawn-up by bodgers who clearly had no idea what they were looking at, which resulted in some panels making absolutely no visual sense.  MWOM though, was an official Marvel pub-lication, and as such, should have received better treatment, as should all the early Marvel UK periodicals.

Think I'm exaggerating?  Take a look at the page below (from SMCW #50) to see how JOHN ROMITA's art was ruined by too much Zipatone and inferior printing, and you'll see for yourself that my assertions are no mere hyperbole.  The PANINI incarnation of MWOM, first launched in 2003, had much better production values, though didn't seem able to match the magic of the 1970s version of the mag.

One day, perhaps, we'll see the return of MWOM, but hopefully in the traditional UK weekly comics mould of yesteryear.  Wouldn't that be something?! 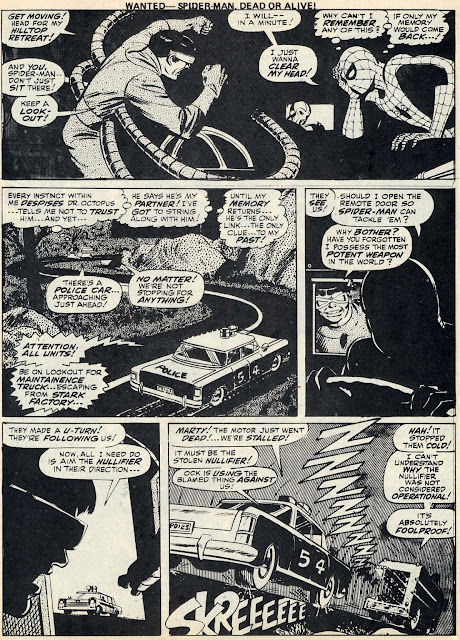 Theres no doubt that after the first year or so the production values could be sketchy to downright awful, I recall several Don Heck Avengers pages being zipatoned to death with bits of art missing. Not to mention some terrible specially produced covers (some brilliant ones in the first 6 to 12 months though) and splash pages that looked like a 5 year old drew them just before their nap. BUT I loved Marvel UK for the first few years was fun, it was quite exciting time for comic fans. Panini production is to be fair wonderful, better imho that the US originals so it's a shame kids dont seem interested as they are good value for money

I think the rot set in when the full colour pages disappeared, McS, as they gave the comic great atmosphere. Like you, I still love the early issues (how could I not? They represent my youth), but looking at them now with a more practiced eye, having myself been a 're-size' artist, the standard of alterations was woefully sub-par in too many instances, even during the first year. With the demise of MWOM, Panini may fill its place with another CE - I'm hoping it will be a Conan one.

Ah nostalgia....luvvly stuff Kid! To me the early MWOM's were like the Alan Class comics - they weren't the "real" thing but they did have a certain magical quality to them which stll keeps me buying them to this day. In later days I realise that much of the magic was the opportunity to see uncoloured versions of the artwork which allowed me to appreciate the line art so much better in spite of the poor quality reproduction - Buscema's Silver Surfer and anything by Gil Kane is always, imho, better in b/w - but there was also that mysterious smell of the ink from the earliest MWOM's. Wasn't normal printing ink like you got from the newspapers of the time but boy was it distinctive. Oh yes - and those Jim Starlin covers which I hated at the time but nowadays...as I sais at the start: luvvly stuff!!!!

I actually quite liked the Jim Starlin covers at the time, MN, perhaps because they were (I think) inked by Joe Sinnott, which gave them a hint of Kirby. I loved John Buscema's cover on the first issue and would've liked to see more by him, but 'twas not to be. After Starlin, I don't think the artists that followed produced anything spectacular, merely competent, so it was good when Marvel reprinted some of the classic ones. Yeah, nostalgia - they say it ain't what it used to be, but it's what this blog is all about.