BY THUNDER! COULD THE PERSON WHO STARTED THIS RUMOUR BE LION?


Remember THUNDER comic?  It was launched in 1970 and lasted all of 22 issues before being merged into LION.  I've read somewhere on a couple of occasions that Thunder was produced merely to be subsumed by Lion and thereby increase its circulation.  H'mm, but here's the thing that makes me slightly skeptical of that rumour being accurate.  It cost a helluva lotta dosh to launch a comic back in the day (probably still does, even though they're not advertised on TV nowadays), and it took at least two years for a periodical to recoup its initial expenses - which, to my mind, makes the claim unlikely.

Publishers don't usually ever spend money with a view to failure, so it's likely that IPC had high hopes for Thunder, and considering the fact that when the two comics combined there was a preponderance of Thunder strips, it seems there was quite an inventory of material to be used up.  I can certainly imagine the IPC bigwigs being aware that if the comic never took off then they could merge it with another title, but spending many thousands of pounds on a new publication with the express intention of merging it with an older one doesn't sound logical to me.

However, I know that a few 'industry' professionals occasionally read Crivens! because it's so compelling (don't worry, my tongue's firmly in my cheek with that last part), so if you know what the real story behind the release of Thunder and its pretty rapid merger into Lion actually is, feel free to share it in the comments section.  Mind now, only facts, no mere idle speculation, 'cos I do enough of that for everyone. 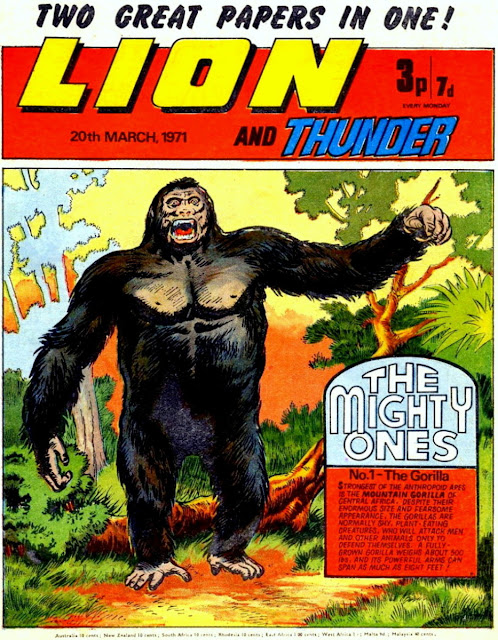 I’m pleased you’ve raised this Kid as I’ve noticed a change in the narrative elsewhere on the well known “hatch, match and dispatch” comic cycle to say that Thunder (and Jet) were there to DELIBERATELY fail from the start.

There may be something there about soaking up spare inventory (possibly from the unlaunched Spitfire and Blackjack comics) and there may have been spare capacity on the presses after those two were pulled to soak up overhead by printing a short lived title and sell at margin BUT where’s the EVIDENCE? I hate it when idle ideas are spoken as fact - usually in the echo chamber of a forum so it gets repeated and repeated until it becomes fact.

I subscribe more to Thunder having been designed to SUCCEED for a lot longer even if in time, if it wasn’t doing so well, bolster Lion or Valiant with its readers. That didn’t work out here and I expect they were disappointed. Though under my own thinking, I don’t have the evidence for that either.

Ah to have been a fly on the wall behind those closed doors...

I just can't imagine IPC spending so much money to launch a deliberate failure, CN. And what if it had been a huge success? Would it then have been Thunder & Lion? True, Lion had been going from the 1950s, and perhaps there was a certain pride in that fact with the IPC bigwigs, but they didn't take that view with Eagle when it was merged into Lion in 1969 - it's usually always money that talks in these cases. Also, the Thunder strips had clearly been prepared well in advance, so there appears to have been no short-term thinking in regard to them, which is why Lion & Thunder, in content, was really more Thunder & Lion. In fact, Thunder only lasting 22 issues looks as if it came as a surprise to IPC for them to merge it so quickly, which again suggests that they had higher hopes for it.

Maybe one day we'll find out the facts, eh?

I always found it strange to create a comic to fail, maybe it was just an industry excuse to hid a publishing failure within the industry. I also read that Star Lord was actually a sales success but was merged with 2000AD to keep the latter title going which seems even dafter . Saying that, personally I found 90% of Jet to be sub standard (loved Thunder) and never understood why it was put out.

And again, Jet lasted only 22 issues,eh? Thing is, whatever their individual circulations were (Starlord included), they would have been far higher than most comics today. In fact, most current comics (I'm being kind - ALL current comics) would kill for circulations as 'low' as the ones which led to 'cancellation' back in the '60s to the '80s. Jet did lead to one long-running success - Ken Reid's Faceache.