CRIVENS - WHERE THE ACTION IS...

Here's my other LOOT CRATE facsimile edition - ACTION COMICS #1.  It's almost the same as the US POSTAL SERVICE's facsimile from back around 1997, except that the interiors are on newsprint paper as opposed to the glossy stuff used on the USPS issue.  Unfortunately, the 10 cents price box is missing, having been removed for earlier facsimiles, but I wish DC had restored it.  Curiously, the price was left on The BRAVE And The BOLD #28 edition, even though it was removed from previous reprints.  (Spare proofs must've been retained with the price intact.)

I've seen the same thing happen before; on the three volume NEAL ADAMS BATMAN collection, most covers still had the price, except for a few where it had been deleted for single issue reprints.  You might think I'm nit-picking seeing as how this reprint isn't exactly the same size as the original 1938 comic (which was shorter and wider like all comics of the time), so what does it matter if the price is missing?  I just think it helps recapture the era in which it was first printed.  That's why I wish MARVEL would leave the COMICS CODE stamp on their facsimiles (which they've removed from recent ones), as it helps retain the spirit of the period.

Anyway, although I've got several reprints of this same issue, it's nice to have yet another to add to the collection.  You'll find this (and the previous one I showed earlier) on ebay, should you be interested in acquiring them.  And should you want to see some other reprints of this iconic comic, click here. 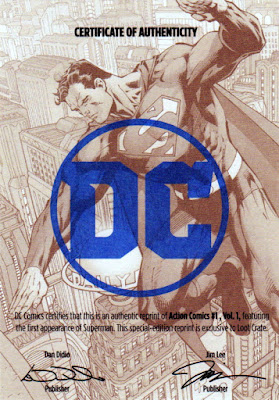 On a different note I picked up the replica Green Lantern/Green Arrow drugs issue one of my top 5 comics of all time (my original is literally falling apart) .

Mine was delivered this morning, McS, but I'm slightly disappointed to see that it's another 'scanned' issue, resulting in the colours being rather muted. Still nice though, but dash it, it's a continued story.