HARRIS FOWLER AND THE SAINT (UPDATED)... 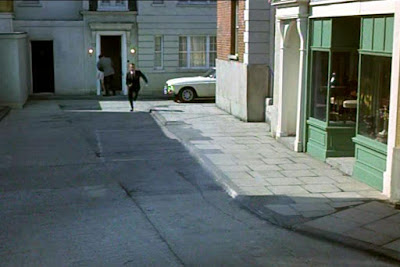 There's an ad on telly at the moment for a personal injury solicitor called HARRIS FOWLER, and it looks as if it may have been filmed on the same outdoor set at ELSTREE STUDIOS where The SAINT's home (and other places) was located in the 1960s TV series starring ROGER MOORE.  It doubled as more than one street in the show (and probably others, like The BARON, etc.), with the facades being 'dressed up' a little as the plot required, and the camera angle varying.

Sometimes the right-hand side of the street was made up to look like houses, shops, or offices - or even a combination.  In fact, sometimes it was even meant to be a street in another country, and shop signs and window posters were in the relevant language.  If it is the same set, it's somewhat amazing that it's still in use after all this time, eh?  Watch out for the ad and see if you agree.  If it's not the same street, it's very like it.  (The screen-grabs seen here are from two different Saint episodes.) 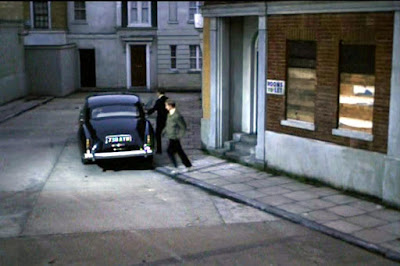 Oh, lookee here.  I managed to get some screen-grabs of the ad.  Okay, on closer inspection and in direct comparison, it's not exactly the same, but similar enough, and perhaps it's been altered somewhat and brought up to date over the intervening years. What's your opinion, Criv-ites? The Saint's street - or just one that coincidentally looks a bit the same?  The comment section awaits.