WHEN THE SCARLET WITCH WAS GREEN...

I'm assuming that whoever coloured the interiors of The
X-MEN #4 didn't do the cover as well, else it's a bit strange that
the costumes of QUICKSILVER and The SCARLET WITCH
don't match up.  Green for WANDA on the cover instead of scarlet,
and a mercury-blue for PIETRO instead of green.  Almost the same
thing was repeated on the next two covers - I say "almost" because
Wanda's cossie was right on #6, but not Pietro's.  Funnily enough,
a few years later, as a member of The AVENGERS, Pietro's
costume became that same silvery-blue.

The cover above is a scan of the actual published issue,
the one below comes from a MARVEL MASTERWORKS
volume.  I think the slight differences in hue can be attributed to
the different printing processes and paper used, rather than the
way they've been coloured.  Besides, there could sometimes be
a colour variation between copies of the same issue back in
the '60s & '70s, due to the vagaries of printing. 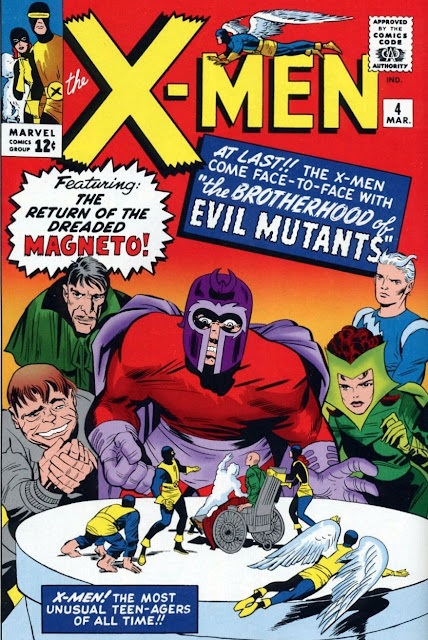 Below is a side-by-side view for easier comparison.  (Click to enlarge.) 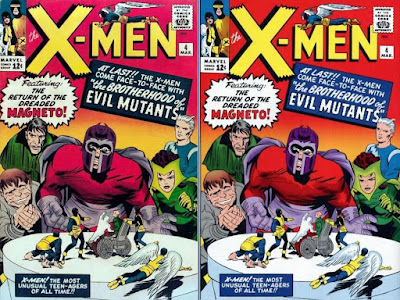 I wonder why they didn't recolour them correctly on the Masterworks?
Gonna have to check the Fantastic cover now!

I don't have them on hand to check (they're still tucked away somewhere), but I think they did correct the colours (and other mistakes) in the first printings of the Masterworks series, JP. In fact, they re-coloured them completely, and not in accord with the original comics. However, when the Masterworks series was revived after a few years in limbo, the new editor decided to make them more archival, so mistakes were restored to their pre-corrected state, and the stories were coloured in line with their original appearance.

Looks like I colored it ( red/green color blind). But it's so extreme even I can see Scarlet Witch isn't red.
And Quicksilver. Oh well. Let's face no one is a quicksilver fan. Lots of people are Flash fans, some are Barry Allen, some Wally West. A few Jay Garrick. If you say your fave speedster is Quicksilver people will look at you like you gave two heads. Yet he made it to the movies before the Flash.

Ah, but The Flash made it to TV first, Phil, so they're even. I quite liked Quicksilver when I was a kid - even named my pet mouse after him.

I've always been a Quicksilver fan, never cared about Flash :-S , even down to the costume design

I quite like both costumes, KT, but Pietro's powers were at a more believable level.