ASTONISHING TALES was a great little comic, lasting for 36 issues from 1970 to '76.  JACK KIRBY had some of his last work for MARVEL published in the first couple of issues (before departing for DC - though he would later return), and WALLY WOOD's last regular strip for 'The House Of Ideas' featured in numbers 1-4.  Let's face it, with artists like Kirby and Wood, as well as BARRY SMITH and GEORGE TUSKA, the mag got off to a flying start.  Here are the covers and splash pages from the first five issues for your consideration and enjoyment.

Incidentally, when Wally Wood heard that Jack had defected to DC, he contacted them to offer his services as inker of Jack's new mags - only to be told that VINCE COLLETTA had already been given the gig.  Now, I actually like Colletta's inks over Kirby's pencils, but can you imagine how great the FOURTH WORLD mags would've looked had they been inked by Woody?

Thoughts, theories, and observations can be recorded in our captivating comments section, o cavorting Criv-ites.  So what are you all waiting for, frantic ones?  Get typing! 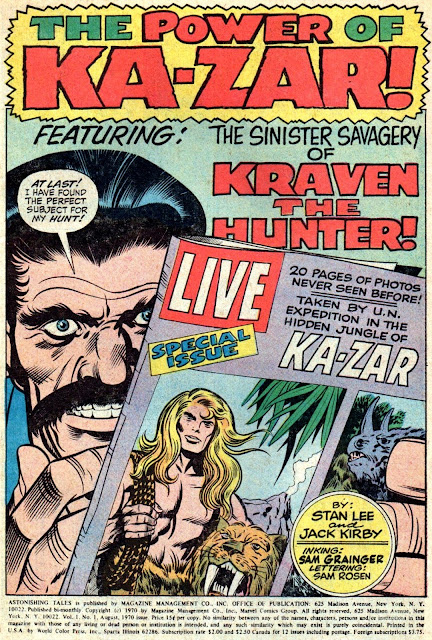 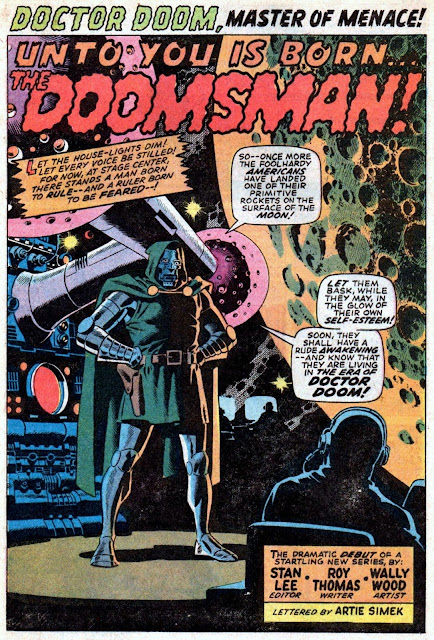 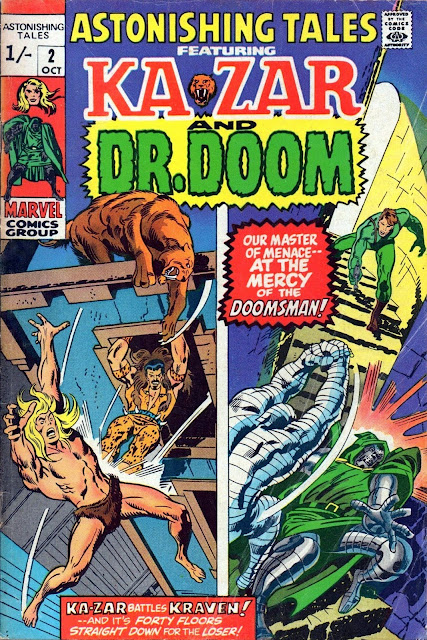 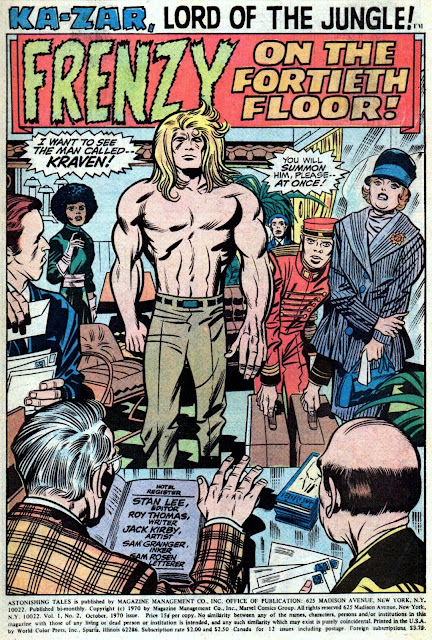 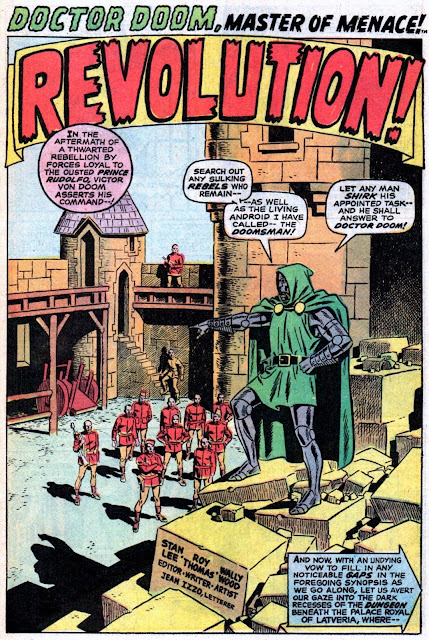 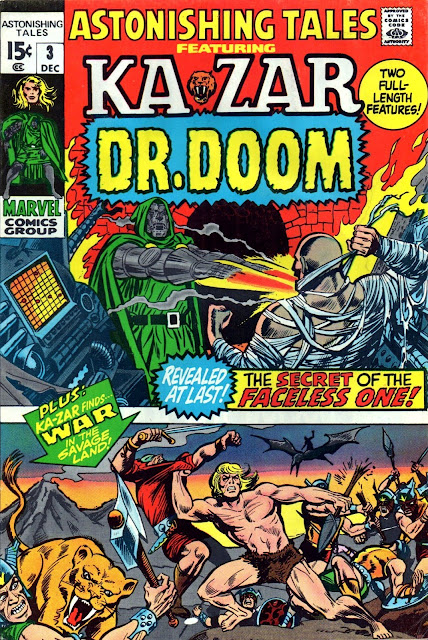 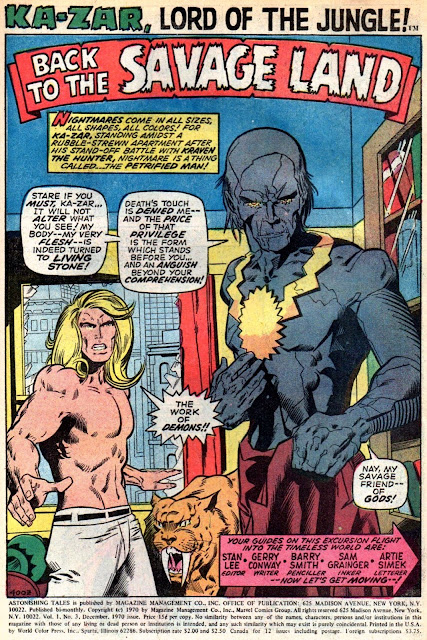 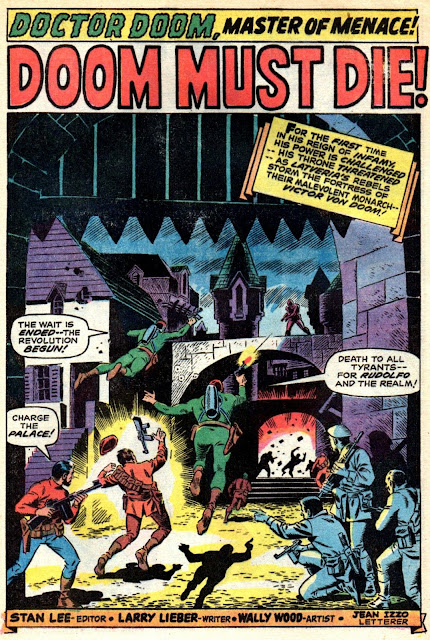 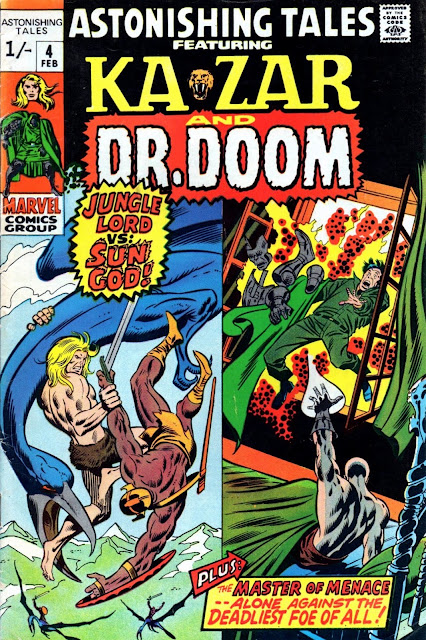 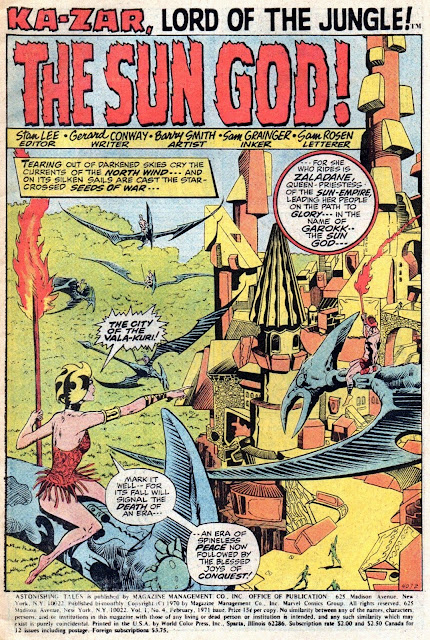 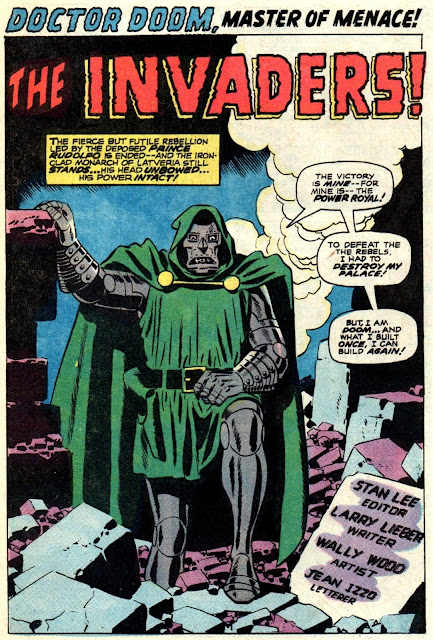 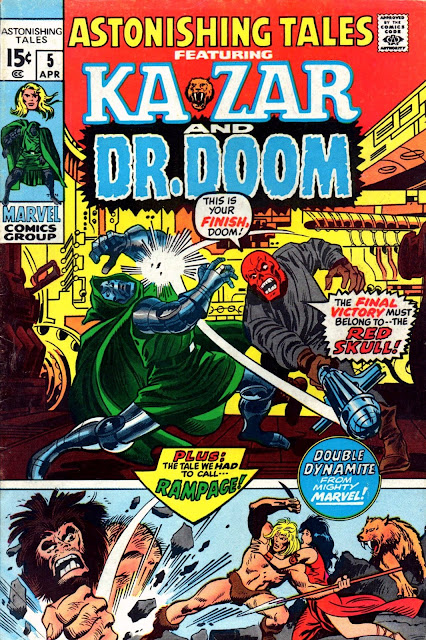 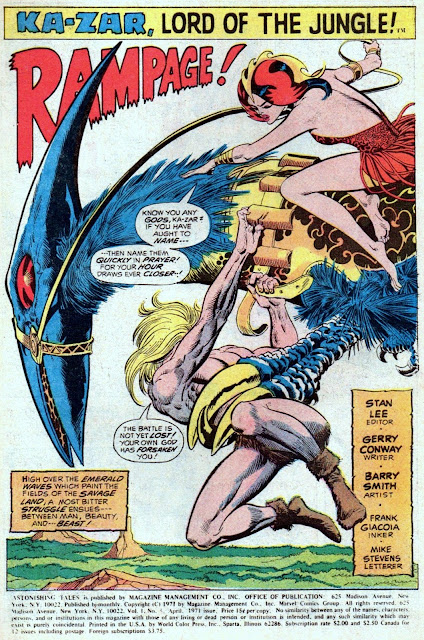 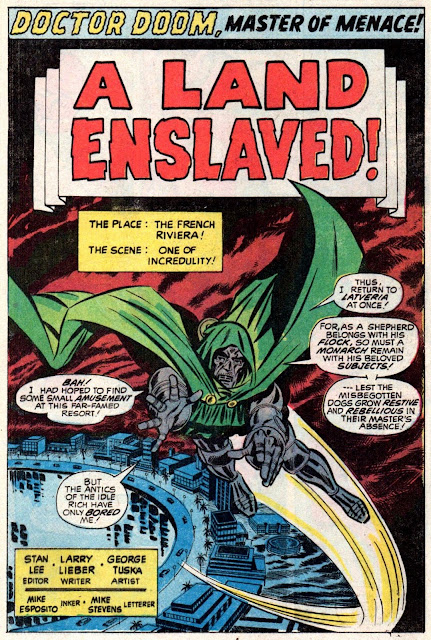 I remember those Ka-Zar stories from the early issues of Planet Of The Apes.

So do I ('though I'd originally forgotten it was POTA until a couple or so years ago). I think the fifth one appeared in The Super-Heroes - not sure if it had previously appeared in POTA.

Wow! Didn't know that Wood had offered to ink Kirby. That would have been incredible. Colletta's inks didn't always work with Kirby, but they were okay with Thor and Fourth World stories to me. Still, would love to have seen the Kirby/Wood combination.

Wood inked some of Kirby's 'Challengers of the Unknown', G, which can be seen on my blog somewhere. (Just in case you haven't already seen them.) I think the post is called 'Kirby's Wooden Art', or something like that.

Kid, the fifth Ka-Zar story was definitely in POTA - I remember the splash page.

That is awesome stuff! Except for Barry Smith's Kirby imitation, but you can see glimpses of the real Smith poking through. Doom looks good though doesn't he? Kraven is in the Squirrel Girl/Howard the Duck two issue crossover this month and is quite hilarious in it.

It was also in another mag I think 'though, CJ, which, off the top of my head (I was tired), I thought was The Super-Heroes. However, I think it may have been Savage Sword Of Conan Weekly.

I think Smith had already drifted away from imitating Kirby, Phil, as he was drawing Conan by this time, so his own style was already at the forefront. I'll keep an eye out for that crossover.

Barry Smith is brilliant with Ka-Zar.
I read this in Planet of the apes and remember rereading this and being obsessed with the Sun God.
Wally Wood is just timeless and of its time at the same time-makes sense to me.
Nice to see it in colour.

You're right, Baab - Barry Smith was certainly coming into his own as an artist. Wally Wood's art is always good to behold - shame he only did four issues.

I'm trying to get a full set of those early "Astonishing Tales" "split" story titles with Ka-Zar etc some great artists on that book and so far I have managed to pick them up for a good price (all under £6 some for £1.50 albeit with minor ripped covers which does not bother me at all) - Strange how art styles evolve - on this title you see Barry Smith imitating (OR being overly influenced BY) Kirby and only a few issues later you see Herb Trimpe taking over the Ka-Zar strip doing a fantastic take on Smith style.

I think the first Ka-Zar splash page has a hint of Kirby, but it's not really obvious in the rest of the strip, McS. I wouldn't mind acquiring a full set of this series myself - it's certainly do-able as there are only 36 issues (and I already have the first five).

I have about 25 of the set so far the latter issues are of less interest to me its these early issues that are wee gems. Ditto Amazing Tales (although I have far fewer of these)

I only have #1 of Amazing Adventures (Tales? You're making up your own comics, McS), but I have reprints of the Kirby Inhumans tales in one of the Jack Kirby Marvel Visionaries volumes. I'll definitely get #s 6-8 of Astonishing Tales for the Doctor Doom stories, maybe get the rest later. (No hurry.)

I have a question about the Ka-Zar story in Astonishing Tales #7. Was it really written by Roy Thomas? It's not his style at all. It reads like a Gerry Conway story.

Well, Marvel credit the story to Roy Thomas, and though credits have been wrong before, as far as I know there seems to be no reason for doubt in this instance. Gerry Conway DID write the Dr. Doom story in the mag.

I may be wrong, so I was wondering if anything has ever been said by anyone that would back me up. After reading Marvel's comics from 1961 to 1974 in chronological order I got used to the writers' styles, and it just looks to me like Gerry Conway. When it comes to artists, they're easier to identify.

I emailed Roy Thomas to ask - just waiting for him to get back to me.

You're in touch with Roy Thomas? Wow, I'm in awe! After Stan Lee himself, he's probably the person I respect most at Marvel. Let's hope he still remembers this issue after 50 years. I can't even remember who was my girlfriend in 1971.

Well, I wouldn't want to give the wrong impression - we're not buddies or pen pals or anything, but we do have one another's email addresses. Barry Pearl and Nick Caputo are more in touch with him than I am (and vice versa), but Roy's a decent guy and isn't inaccessible to non-entities like me. 1971? I didn't have a girlfriend back then, I had to wait until around 1975 or '76. I pride myself on being able to date any woman I please - I just can't please any. (Little joke there.)

Meant to say that the Marvel Database credits Roy as the writer. It's interesting to note that Gerry wrote issues 3-5 (the only early ones I have), so if Roy filled in for him, it may be that he deliberately kept it in Gerry's style for the sake of continuity. Failing that, it might have been an error in the credits. Joe Sinnott was once credited as inker on an FF story that was inked by Frank Giacoia.

Roy kindly replied to my query, MH, and here's some of what he said.

I can't swear, at this distance, that Gerry didn't ghost some of that story, but I doubt it. If he had written any of it, there's no reason his name wouldn't have been added to the credits. Sometimes plotting got done anonymously... like mine of TOMB OF DRACULA #1 and Gerry's for me on the two HULK "Moby Dick of Space" issues, but I'd have had no reason to have Gerry ghost dialogue for me without credit. Nor would I have been imitating his style, although I might've been influenced by something he wrote previously, without really thinking about it.

Thanks a lot, Kid. That's the final word on the subject, whatever my suspicions might have been.

Nae bother, MH, and thanks to Roy for taking time out of his busy schedule to reply.