Having mentioned The GOLDEN GUARDIAN and The
NEWSBOY LEGION in the previous post, I thought it'd be a
good idea to showcase their four-issue series from 1994/'95.  I'd
love to see these characters again in their own mag, but DC seem
unable to resist changing things for the worse, as witnessed not
too long ago in their INFINITY MAN/FOREVER PEOPLE
nine-issue run.  What a waste of time and space that was.

If they were to revive these characters now, they'd prob-
ably make The Guardian a woman, and one of the Newsboys
would be a girl, gay, or trans-gendered.  What's wrong with that,
you ask?  It's not as creators JOE SIMON and JACK KIRBY
envisioned them, and it's not the characters that I read about in
the early '70s.  Has any comicbook company ever changed a
character (in a major way) for the better?  I can't think of
one, can you?  If yes, let rip in the comments section.

In the meantime, enjoy the pretty piccies. 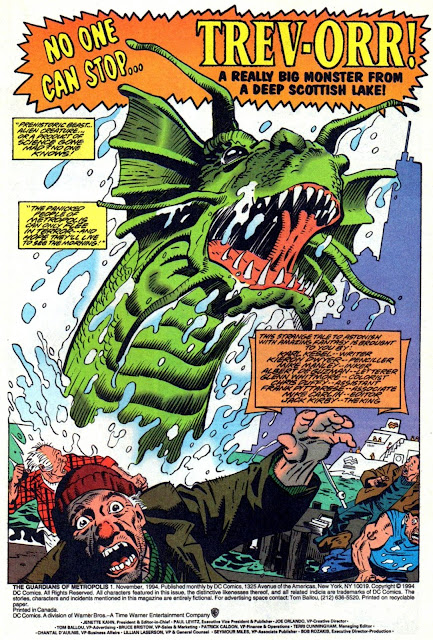 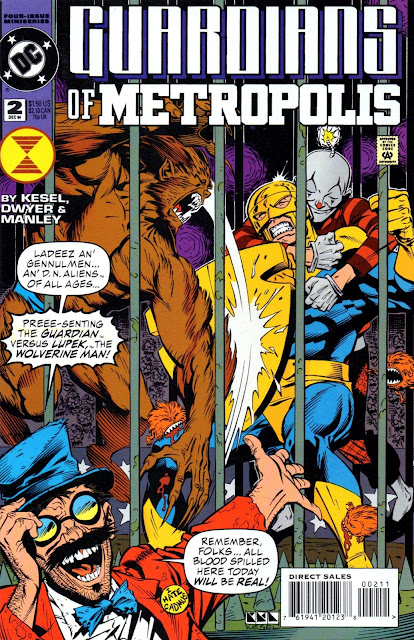 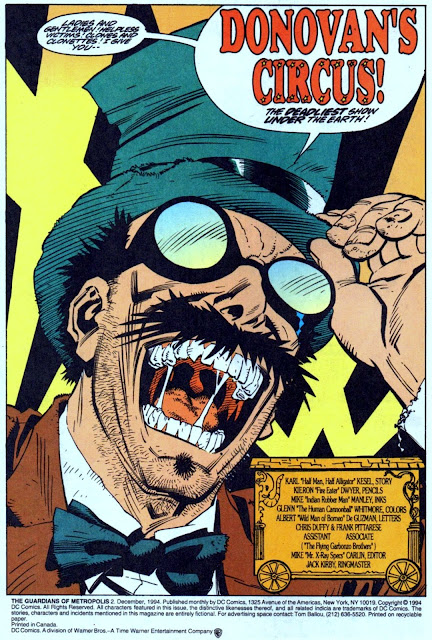 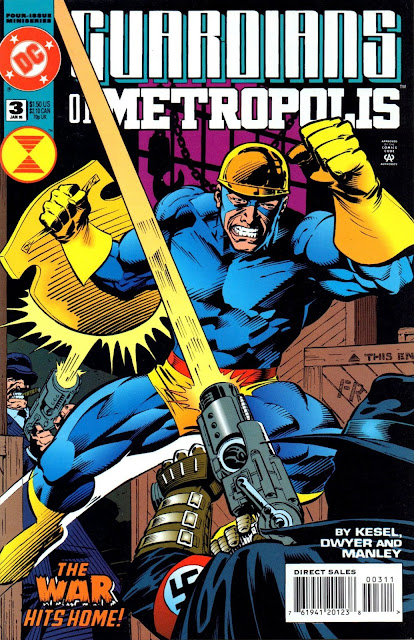 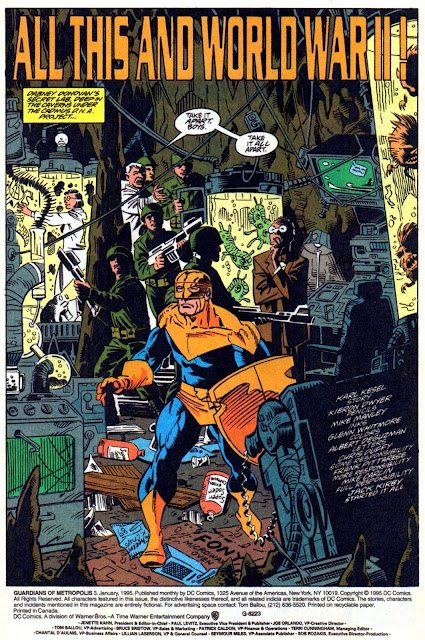 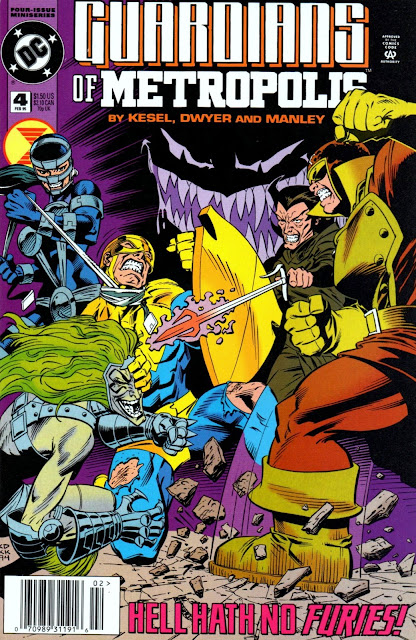 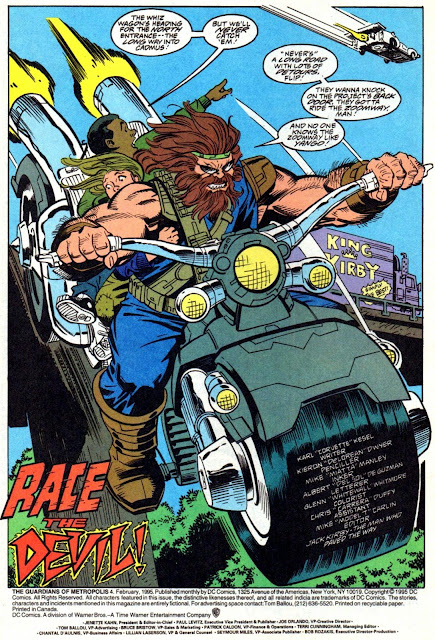 Jean Grey was far more interesting as Phoenix/Dark Phoenix than she was as boring Marvel Girl.

One of my favourite Kirby characters was the 70’s Golden Guardian and I never understood why DC never gave him more prominence or his own comic back in the day unless they thought he was too much like Capt America in appearance. Wasn’t the 70s GG a clone of the 40s version? (or was it the same guy?). I think the (oh so many) newer (non-Kirby) incarnations of GG were based on clones or revamped versions of cloned versions that were then cloned again etc that (to me) it just got to confusing.

I have no issues at all with a character being revamped (especially when it is in effect a 3rd rate character like GG, as much as I like him) as a woman , gay version, other races etc if it hasn’t worked in the past but in this particular case they should give Kirby’s original idea another go (imho) he has potential. I’m still not happy at a lady Thor why didn’t the just make Sif (a great character) an even more rounded and interesting character - I won’t even discuss the new Hulk version Im upset at any changes made to him (I have a major petting lip on the go here over that one!!!) - You know I cant think of a post 1960s (major) revamp that has worked I will be interesting to hear if anyone can name any (I'll have a wee think).

I do remember Grant Morrison did a “ Manhattan Guardian” character based on GG (who was African American) which was ok. I think GGs 70s helmet looks a lot like Robocops.

Yup, McScotty, the Guardian from the '70s was a clone of Jim Harper, the original Guardian. I could be wrong here, but my impression was that the new Newsboy Legion were the sons of the originals, but subsequent writers later made them clones. I don't mind that 'though, 'cos that's a nice twist and in keeping with the theme that Kirby was exploring.

Never saw Grant's version of the Guardian, nor have I read any of the lady Thor or new Hulk mags.

IIRC, the 1970's Guardian was the DNA Project's clone of Jim Harper, and the new Newsboy Legion members were the sons of the originals. I hadn't heard before about them later being retconned as clones, but somehow I'm not surprised.

Offhand, I can't think of a single retcon/reboot/revision that I liked.

Today's revisions are based on political correctness (turn this character into a token black guy, turn that character female, make the other one gay), and are really publicity stunts and cynical marketing ploys disguised as attempts to promote diversity and tolerance. Also, there seems to be an attitude that the previous versions were all wrong, and today's creators see themselves as geniuses who are finally getting it "right."

Admittedly, some of my Silver Age favorites were themselves retcons or reboots, but there was a difference. Finding Captain America in an iceberg is not the same thing as a reboot that says that Steve Rogers never existed. Or, DC introduced Barry Allen and Hal Jordan, but still acknowledged Jay Garrick and Alan Scott as the original Flash and Green Lantern.

Also, admittedly, I first started reading superhero comics in mid-1966, so the Golden Age and early Silver Age were before my time. I encountered the later versions before I saw the earlier ones in reprints or in JLA-JSA team-ups. If I were older, and had seen the earlier versions first, I might have grumbled that "my" Thor was not a god, but a mortal who found the hammer and inherited the power. Or that "my" Hawkman was a reincarnated Egyptian prince, not a space cop. Or that "my" Superman began his superhero career as an adult, and was never Superboy.

As it is, I grumbled when Byrne's reboot wiped out "my" Superboy.

I had mixed feelings about Byrne's revamp of Superman to be honest, TC. On the one hand, I liked the fact that he was 'born' on Earth, and that he started his career as an adult, as first envisioned by Siegel & Shuster. By having the Kents still living, the 'atmosphere' of the Superboy tales was preserved to some extent. However, in seeming contradiction, I had reservations about the changes just because I don't like change for the sake of it. However, I think the Crisis series which set up the changes was unnecessary (and little more than a sales ploy). DC should simply have done what Denny O'Neil did with his 'Kryptonite Nevermore' run back in the '70s; namely, just ignore and not refer to whatever aspects of the Superman legend they didn't like.