I bought the above comic when it first came out because the cover was based on ACTION COMICS #1, but I recently acquired a few subsequent issues from someone I know.  "So why not do a gallery?" thought I.  No sooner said than done, so here it is.

I'm not sure which covers are standard and which are variants, although I suspect that the ads feature the standard ones, but you can argue that out amongst yourselves.  The mag was cancelled with #12, so I might track down the remaining issues to complete the set.  If I ever do, I'll post them.

I've reprinted an old post after the last cover because it details my own (unofficial) association with POPEYE when I was a mere schoolkid.  Consider it a bonus, wanted or not. 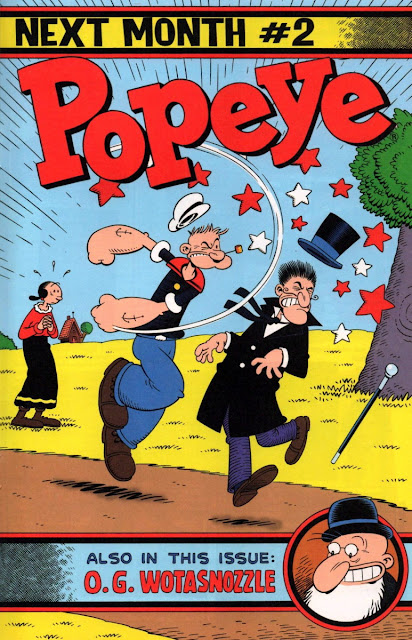 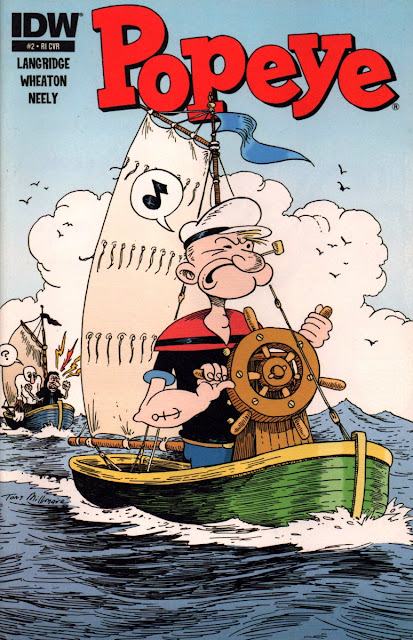 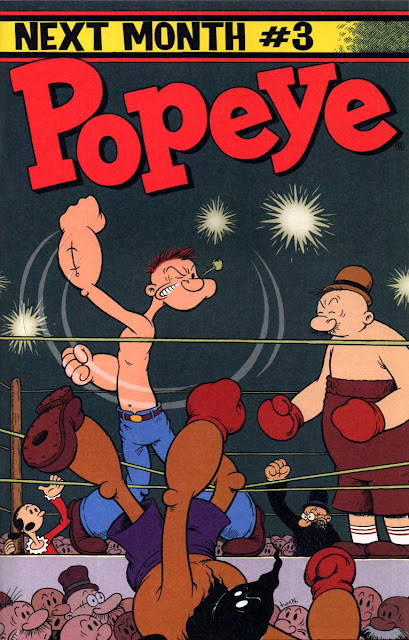 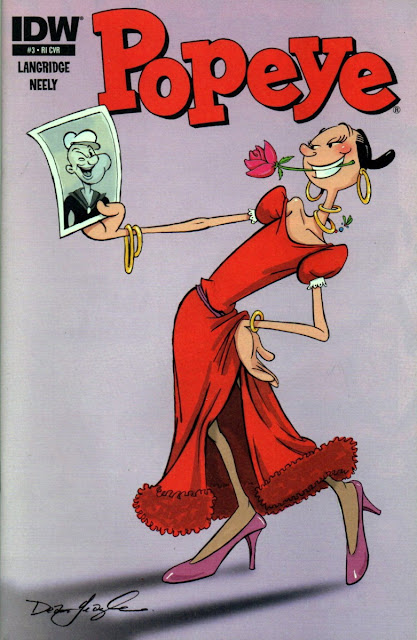 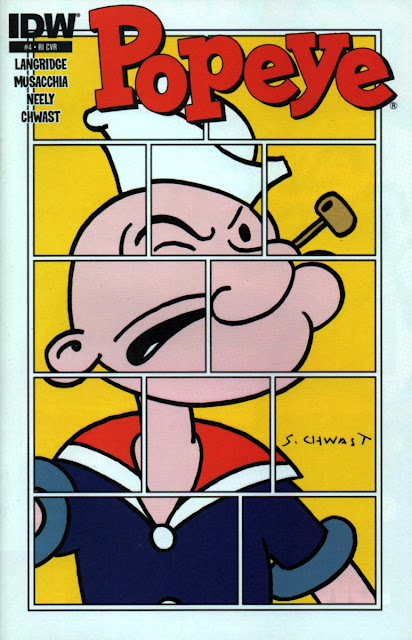 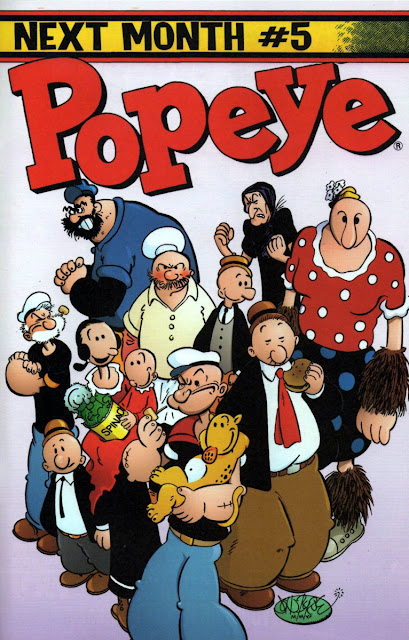 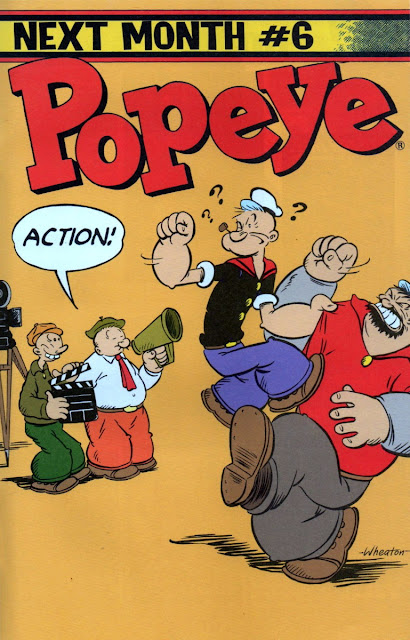 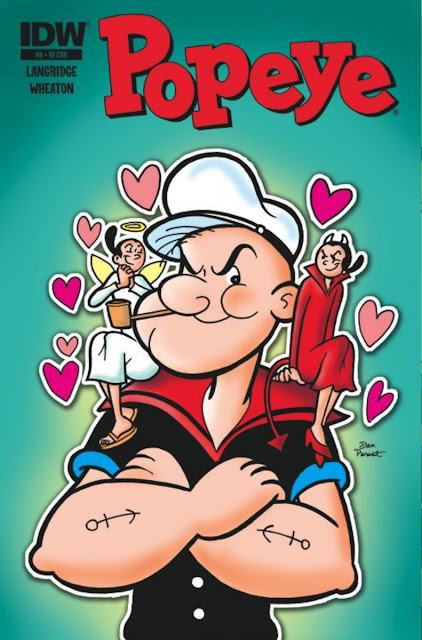 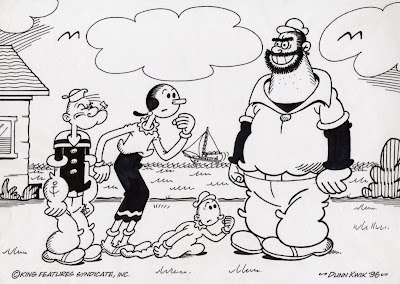 When I was at secondary school in the '70s, my main claim to fame was drawing POPEYE.  My classmates were always pleading with me in earnest tones, "Draw Popeye, Robson, draw Popeye!"  They were entranced by the sailor's image coming to life on the page (in the back of a school jotter usually) with only a few deft scribbles.  The celebrity status accorded me, the adulation bestowed upon my exalted self, the esteem in which I was held - it was almost intoxicating as I strode heroically through the school corridors.

"Look!", cried awestruck lesser pupils as I passed, prostrating themselves in obeisance, "Tis the Mighty Robson, he who is to be regarded as unto a god by we lowly mortals!  All hail the Mighty Robson!"  Even teachers aligned themselves with the 'Cult of Robson' as it came to be known; I often used to hear them refer to me (in hushed tones and from a respectful distance naturally) as "a bit of a cult!"

Well, okay - I might, perhaps, have indulged in just the slightest bit of hyperbole halfway through that little reminiscence, but only a tad.  The reality was pretty close to how I recall.  (Cough!)

Anyway, I've continued to draw Popeye from time to time over the years, and above is a picture I whipped up for someone-or-other in the 1990s.  DUNN KWIK is one of many pseudonyms I use on occasion, the afore-mentioned being reserved for stuff produced in a bit of a hurry.  Still - not too shabby, is it?
Posted by Kid at Thursday, April 28, 2016

That's a great Popeye picture, Kid - you're a really good artist. I loved drawing during my childhood years - I copied panels from my Marvel comics. I still doodle now 'though and I can still draw the apes from POTA :D

Thanks, CJ. Although when I look at it, I mainly see what needs improving. Interestingly, John Buscema claimed that he just couldn't draw Popeye, no matter how hard he tried. (Probably could 'though.) You still draw the apes from POTA? Aw, you're just monkeying around.

Are you sure you heard them correclty when they called you a bit of a "cult" Kid !!

Nice covers and a nice wee illo by yourself.

Of course I did, McS - what other word beginning with a 'c' would they be calling me? I'm universally loved, adored, and recognized as a brilliant writer, artist and wit. (I'm sure it was 'wit' - it certainly ended in 'it'.)

Excellent drawing, mate; it can stand proudly alongside the accompanying comic covers, which are also pretty wonderful.

Got that number one! Strange how this kids comic is getting bought by middle age geezers like us eh? I hope kids today know and love the mighty sailor man.

Thanks, MC, glad to know that it's gone down well with some people. As regards the covers, I think I prefer the main ones over the variant ones. I do like the John Byrne one 'though.

Sadly, it was cancelled with the 12th ish, Phil. However, you can't keep a good spinach-muncher down for long. (Oo-er, that sounds a bit naughty, but you know what I mean.)

Ta much. You're obviously a man of taste and discernment, Rip.

Just so's you knows, the comic wasn't cancelled, I still get it every month. #44 came out the other week. Not sure if they still have variant covers, though.

Ah, right, thanks for that. They must've changed their mind because it was on the IDW website and elsewhere that #12 was going to be the last issue. Unless they started it again and kept the numbering. Weren't they also doing a Popeye Classic comic featuring reprints? If so, could it be that one you're still getting?

Edit: Just checked - it's the classic comic that's still going. The one featured in the post ended with #12.