THE MYSTERY OF THE MYSTIFYING MEMORY... 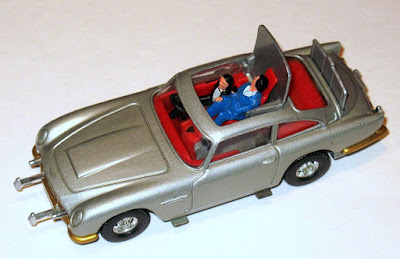 Many years ago I had a dream.  I dreamt I was in a shop
and saw a CORGI TOYS ASTON MARTIN DB5, but in a
bigger scale than its previous two releases.  I opened up the box,
took out the car, looked at it, and was quite impressed by this new
model.  Then I awoke from my dream, realized I had only been
dreaming, and was slightly disappointed by the fact.

A couple of years later I'm upstairs in JOHN MENZIES,
and my eyes fall upon a familiar object.  A JAMES BOND
Aston Martin by Corgi toys, and it's the bigger scale model that
I saw and handled in my dream.  I'm astounded.  Had I had some
kind of prophetic vision, or was it simply a coincidence?  Surely
the latter, because there's no such thing as being able to see
into the future, is there?  Tell me, is there?

That was back in the '70s.  The car was issued in 1978, so
my dream must have preceded the actual event by a year or
two.  But such things don't happen, do they?  Tell me, do they?
It's because of my doubt over such things that I've begun to con-
sider other possibilities.  Could it be I'd seen the car, but forgot-
ten it, then had a dream about it as if I was seeing it for the first
time?  Perhaps that's why I believe that the dream came
first, but that I'm simply mistaken.

Thing is, I had the dream more than once before I saw
the car for what seemed like the first time in real life.  So
now I'm in the position of wondering exactly what to believe.
Did I see the car first (but forget), and then have the dream - or
could it have been precisely as I thought for many years after-
wards before the doubt set in?  Obviously it's got to be either
one or the other, but which one?  Tell me, which one?

Or maybe there is another explanation.  Perhaps it was
only in my dream that I felt I hadn't previously seen the car
before discovering it on sale in a shop.  That's to say, I'd seen
the car in a shop, but dreamt I hadn't spied it until after seeing
it in a dream;  a 'dream within a dream' in other words, that
never happened despite me believing it had.  (I sure hope
that makes some kind of sense to you all.)

Ever had anything similar happen to you?  Something
you think you dreamt about that seemingly came true, but
now you're not quite sure if you remember things as they ac-
tually happened, or whether time is merely playing tricks
with your memory.  Tell all in the comments section.
Posted by Kid at Sunday, April 03, 2016

My oldest brother's got a JB Aston Martin that came out in the mid-late 60s - it's about a foot long, battery operated; you start it up and it runs along, then stops and the machine guns come out and fire (ie little flashing lights with accompanying sound), the bulletproof shield pops up, it does the eject thing, the works.

Thing is, he was such a tightwad with such goodies that he very rarely brought it out to play with or display...so far as I know it's still sitting in its box in the bottom of a wardrobe somewhere.

I once had a dream about an old girlfriend. Too bad it didn't work out. Too bad for her. Or her good luck depending how you look at it.

And it'd probably be worth a small fortune at auction, BS. That's his retirement fund, no wonder he wouldn't let you play with it.

What didn't work out, Phil - the old girlfriend, or the dream about her? And how do you think SHE would look at it?

I have an original one of those toys that I'm quite proud of. Picked it up in a junk shop earlier this year. Still has the bad guy which fires out of the ejector seat and all.

I've got various versions of all three releases - boxes and all. Great wee toy.

I haven't dreamed any future events but I did once have a sort of "premonition" that my sister would die young - a couple of years later she died aged 19. And about 10 years ago I had a similar feeling that my mother would die at the very end of the decade (the "noughties") - she died on November 5th 2009. Spooky.

Spooky indeed, CJ. Although perhaps your 'premonitions' reflected fears you had about your sister and mother for some reason - health issues, etc. Ring any bells?

Do me a favour, Mr Jones - don't dream about me!

Well, my mother died aged 77 so it wasn't that unexpected but it was the timing that was odd - right at the end of the decade as I'd "foreseen". By a strange bit of timing I'd bought my first ever collection of Robert E. Howard Conan stories just three days earlier - I started reading the first story, "The Tower Of The Elephant" just a few hours after my mother's funeral.

That'd be hard to do, BS - none of us know what you look like.

I bought a Gigantor figure on the day my dog was privately cremated. Popped into Glasgow's FP to buy it on the way home from the crematorium. Whenever I look at it, I remember her warm ashes on my lap as my pal ran me home in his car. Funny the things we remember, eh?

Never had the Aston Martin, or any other James Bond toys. Catch-22: when I was young enough for toy cars and action figures, I was too young to go see Bond films. I sort of vaguely understood who the character was, since "James Bond" had already become a metaphor both for espionage and for a cool action hero. (In Detective Comics #352, Elongated Man catches spies who were smuggling microfilm, and his wife says, "How James Bondish.") I did have some spy stuff, though. Two 6" soft plastic (non-movable) Solo and Illya figures, and a Mattel "Agent Zero M" toy pistol.

I've never had a premonition or a dream come true, AFAIR. I've had experiences that were somewhat similar to previous dreams, but not so similar that it was spooky. Coincidences do happen, they just don't happen every day. And I'm not even sure if the dreams preceded the events, or if my memory played tricks with the sequence.

My parents, grandparents, and aunt all died of natural causes after long illnesses, so even if I'd dreamed about it beforehand, I wouldn't consider it a premonition.

And, yes, I think a "premonition" could, in some cases, reflect a reasonable fear or expectation. A friend or relative may have chronic, life-threatening health problems. Or, if a friend is a heavy smoker, you might worry about him/her getting cancer or having a heart attack. If a relative has a dangerous job (military, police officer, firefighter), you might worry about him or her getting killed in the line of duty. Then, if it happens, it may feel like you had a premonition, when actually you just foresaw a real possibility.

Eminently sensible as usual, TC. I remember storing an item behind the water tank in my loft (attic), and I was sure I'd retrieved it before moving to a new house in 1972. However, I couldn't find it when we arrived at our new home, and used to wonder if I'd inadvertently left it behind, and had mistaken my intention to retrieve it with the act of doing so. For years I regularly had dreams where I was back in the loft looking for (and usually finding) it, until 19 years after moving, I visited my former home and found the item (a yellow ball) exactly where I'd left it. I never had the dreams again, but I don't consider them 'premonitions' - more a case of my subconscious mind being preoccupied with an unresolved issue.