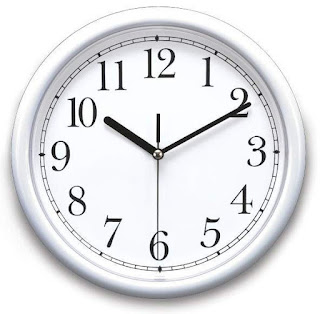 Nearly 10 years ago, I worked in a watch repair shop.  Someone I thought was a friend ran the place, and because she had no option but to employ an idiot when I declined her offer of a job, I felt a little guilty and subsequently agreed to take the position when she eventually decided to dispense with his utterly superfluous 'services'.

The girl I worked with was lazy and uncommitted to the business, but as it was the sort of commercial enterprise that almost ran itself, it still managed to turn a profit, though obviously not as good a one had she deigned to apply herself in the way she ought to have.  She'd arrive late, then take time to apply lipstick and make-up and have her brekkie, things she should've done before coming into work.  There were even times when she turned up reeking of booze.

She'd close the place to go and do shopping, or buy clothes for her idiot boyfriend, while potential customers, finding the shutter down, would simply go along to her rivals a couple of units away.  She ran the place for her own convenience rather than her employers, and whenever I made any suggestions about attracting more business, her reply was always "If they don't bother, why should I?", in reference to the two blokes who paid her.  Even her mutant boyfriend called her "a lazy cow" - and I can't say he was wrong.

She often took advantage of my good nature by going out for a drink with one or two of her motley assortment of 'pals' (on unscheduled breaks), leaving me to cope with long queues by myself - even on a Saturday, the busiest day of the week.  That said, I never enjoyed myself more than when she dropped a sprog and took 6 months maternity leave, and I worked alone for the entire duration she was off.

Being conscientious, I ran the business as if it were my own, occasionally working past closing time to make sure any small repairs not handled by the workshop in Newcastle were completed in a timely (pun intended) fashion.  And guess what?  In the six months she was away, I increased the takings over the previous year for the same period by a whopping 10 grand.  Not a myth, not a hoax, not an imaginary story - a full 10 thousand quid!  That's a lotta dosh!

When I left, after handing in a week's notice because the bosses wouldn't confront the shopping centre owners over the issue of 'hawkers' outside the shop doorway scaring away casual browsers and distracting me from intricate procedures, the shop's takings immediately plummeted.  (Even with the complement of staff now being back to two - herself and my replacement.)  How do I know?

Because I was in secret negotiations with the shop owners about buying the business, along with a friend who saw the potential of the place when he learned of how much I'd increased takings during my former colleague's absence.  We'd therefore been supplied with figures of the business's performance from the last year up to the present one.  The facts (and figures) spoke for themselves.

It seems unlikely that one person could increase takings by such a huge sum, so obviously there must've been other factors at work which accounted for at least part of it.  Sometimes, before her absence, she'd 'phone on her days off to say not to bother doing the 'banking' at closing time, as she'd do it when she came in the next day.  Occasionally I'd do it though, and there were instances when the cash in the safe didn't correspond to what should've been there.  "Don't worry about it," she'd say when I mentioned it, "it always balances up in the end."  (I'm merely relating factual events - any conclusions you draw are your own.)

The shopping centre owners were in some kind of difficulty and weren't renewing leases on premises, so we were told that we'd have to wait until this was sorted before ownership of the lease could be transferred to us.  The sellers advised us to get a solicitor, which we did, though when he contacted their solicitor, his 'counterpart' told him that he hadn't been informed of the intended sale, nor yet received any instructions to proceed on the matter.  The money was all ready and waiting, but nothing was happening.

'Negotiations' wore on for a year and a half, during which time I lost interest and realised that the prospect of working again with my former colleague didn't at all appeal to me.  I'd let myself be influenced by my friend and would-be co-investor, who secured my participation with visions of immense riches and becoming 'captain of my fate'.  I 'phoned the Newcastle boys and told them that, as far as I was concerned, the deal was off, and followed that up with a letter telling them in no uncertain terms what I thought of them for complacently dragging their heels for 18 months.

Anyway, her bosses eventually sold the business to her (at a much higher price), which is probably a good thing, because doubtless I'd have ended up sacking her.  I couldn't say whether it's doing well or not, but as it makes no difference to my life either way, it hasn't really occurred to me to wonder about it.  Obviously, it won't ever do as well as it would under my stewardship, but money couldn't buy the sense of relief (and release) I felt the moment I made up my mind to simply walk away from it all.

Sometimes, "Never go back" can be a very smart decision - even though it's not one you'll often hear nostalgists such as myself admit to.
Posted by Kid at Friday, March 17, 2017