STAPLES IN THE SANDS OF TIME... 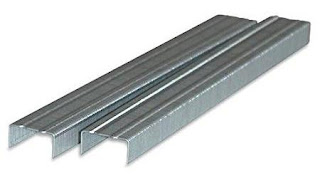 I decorated my back room recently.  I say 'recently',
but it actually took me about 29 years to start it, and then
it was months of hanging a couple of strips of wallpaper every
few weeks 'til it was finished.  Because of a medical condition,
I tire easily, and I just didn't have the stamina to apply myself
to the task with any energy or enthusiasm.  Therefore, it was
a bit here and there when I could.  And I was absolutely
knackered at the end of it, let me tell you.

The room used to be my brother's, mainly, when we
stayed here the first time around.  I say 'mainly' because
we shared it for quite a few months when my room suffered
from damp during the winter months, and there was a period
when we swapped for a while, so the room was 'officially' mine
as well.  As regular readers will know (and lost the will to live
at my continual re-telling), we flitted to another house after
eleven years, then moved back (sans brother) four-plus
years later.  Along with my old room, I also comman-
deered my sibling's former sleeping quarters.

Yeah, big deal, you say, get to the point.  Well, while I
was in the long, slow, arduous process of trying to hang a
few strips of wallpaper, I found staples embedded in various
spots in the walls, where my brother had affixed all his heavy
metal posters back in the '70s.  I decided to leave them there
(after flattening them into the wall with a hammer), as, having
been there for more than 40 years, I didn't have the heart to
remove them.  Long after I'm less than a memory, these old
staples will likely still be there, a permanent testament to
the fact of my family's presence in this house down
through the decades.

I've touched on this subject before, but it amazes me
to think that we always leave our mark on wherever we've
lived, even if we don't realise it at the time.  When I revisted
a former dwelling sixteen years after having moved out, I was
surprised by just how many 'markers' of our time there yet re-
mained.  Wallpaper, tiles, lowered ceilings, marks where fluo-
rescent lights had been, etc., it was all comfortably familiar to
me, as if we'd never been away.  And when we returned to
the house in which I now reside, our departed doggie's
scratches in the back door were there to welcome
us and remind us of our previous occupation.

We all leave our mark behind us, however trivial,
and regardless of whether we intend to or not.  What
feature of any of your former homes will attest to you
once having lived there long after you're gone?
Posted by Kid at Tuesday, March 07, 2017


I honestly couldn’t think of one thing of a personal nature, I have left behind in any of my houses Kid (at least 2 are now demolished) I’m sure my family or myself did but can’t think of a thing. The house I recently purchased I stripped the (hideous flower patterned) wallpaper back to the bare walls, got rid of the kitchen and carpets, skinned the awful thick aertex on the ceiling , and put in new windows and cut back and took out a load of trees that were way too big and dangerous (cost a ruddy fortune as well)-I even (through necessity) got a new roof - so if anything I have taken stuff away rather than left behind anything (especially for the young (ish) couple I bought my house from) but lack of taste and style is no excuse for keeping any of their nostalgia in place .

Here's a daft example, PM: We had some sort of decorative item (can't remember exactly what at the moment, 'though might have been a metal lightshade) on the underside of the 'ceiling' of the open front porch of this house when we lived here the first time. We removed it ourselves at some stage in our previous term, but when we moved back, there was still a couple of screws and part of the 'fixture' that held it in place - and it's still there today. Neither ourselves or the tenant between us ever removed it, so there it remains as a marker to our time in the house back in the '70s and early '80s. Of course, I'd forgotten all about it and never given it a thought when we moved, but when we moved back, it was like an old friend waiting to welcome us. There's probably some minor thing about your house, somewhere, that the couple you bought it from would recognise were they ever to revisit. And it'll be the same with your old houses that haven't been demolished.