HEY, IT'S YOGI BEAR IN DIET (AND SCRIPT) DISASTER...


25 years ago, a MARVEL U.K. editor asked me to letter a Holiday Special at short notice.  I agreed, but when I received the script and art, the script was awful.  It had been translated from a foreign edition (which was a translation from a U.S. edition) and the script was so immensely bad as to be insulting.

It was a HANNA-BARBERA-based comic, and almost nothing about the scripts was right.  RANGER SMITH was named WARDEN SMITH, PICNIC BASKETS were called LUNCHEON HAMPERS, and the characters spoke in a stilted fashion, merely repeating, in the main, what was obvious in the pictures.  What's more, little care had been taken to ensure the dialogue and captions fitted the allocated space.  It was a dog's dinner.

I 'phoned the editor and related my concerns, and enquired if I might be allowed to 'punch' things up a bit.  She reluctantly assented, seeing the wisdom in my words, but she wasn't overly happy that I'd spotted oversights she had missed.  However, the deadline was looming and there wasn't time to return the strips to the office to be lettered by anyone else.

You'll have to trust me on this, I suppose, but the finished result was far better than the original version.  I tailored all the dialogue to fit the balloons, I supplied the characters' logos for the splash pages (taken from a Hanna-Barbera book I had), and actually added some humour to the script.

The tale you see is one of the results.  If you get at least one chuckle out of it, that's one more than was in it before I got to work.  Did I get any more dosh for all the extra time and effort I put into it?  Hey, don't ask silly questions.

(Incidentally, I suspect that 'parsley' should have been rendered as 'celery', but that didn't occur to me until after I'd turned the job in.  It's just that I know people munch on celery to curb their appetite and lose weight, but I've never heard of anyone advised to eat parsley to do so.  It would probably work, but celery is the usual recommendation.) 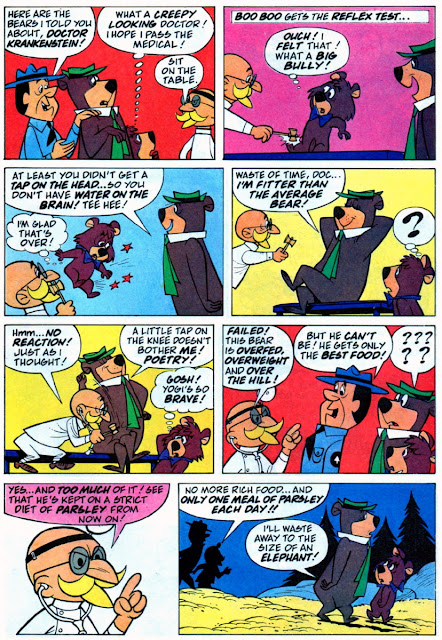 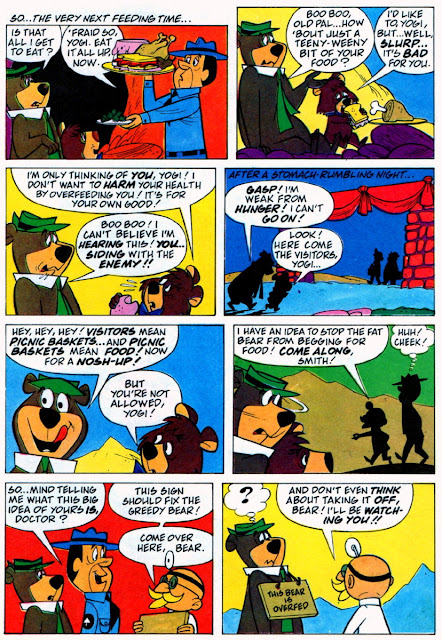 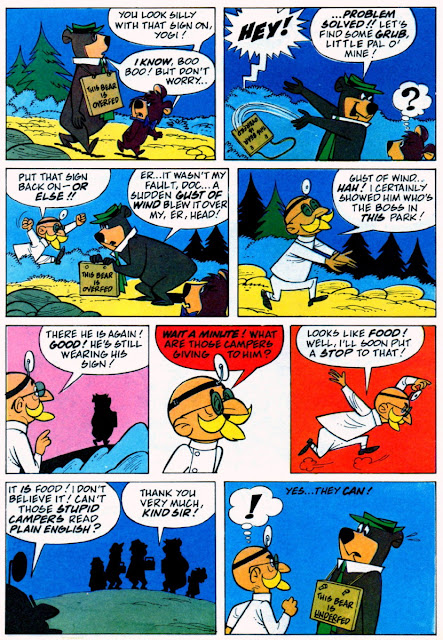 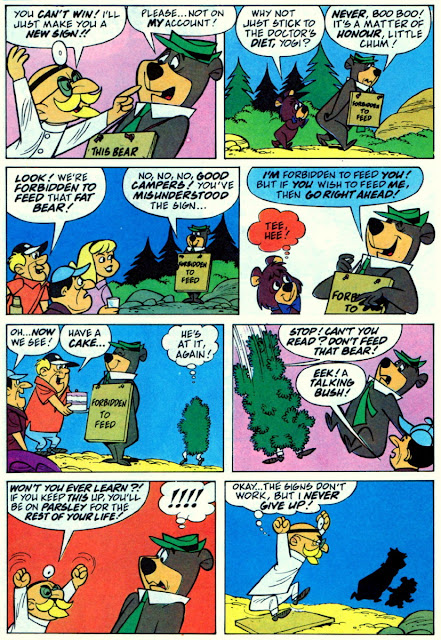 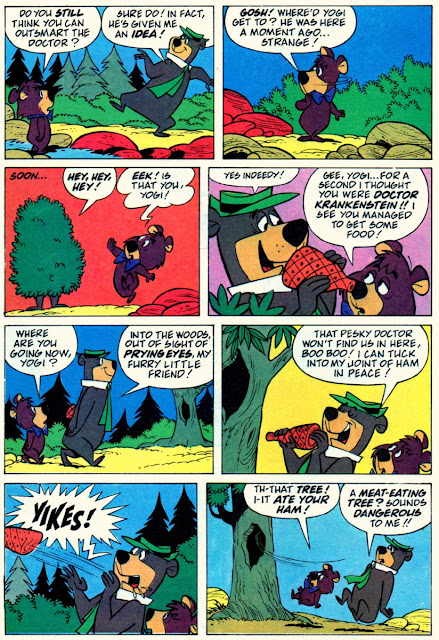 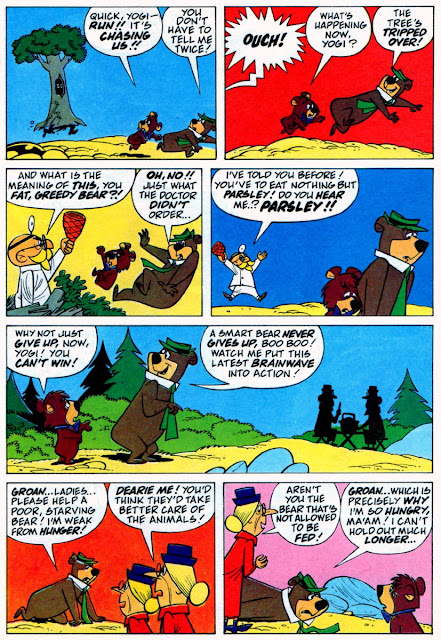 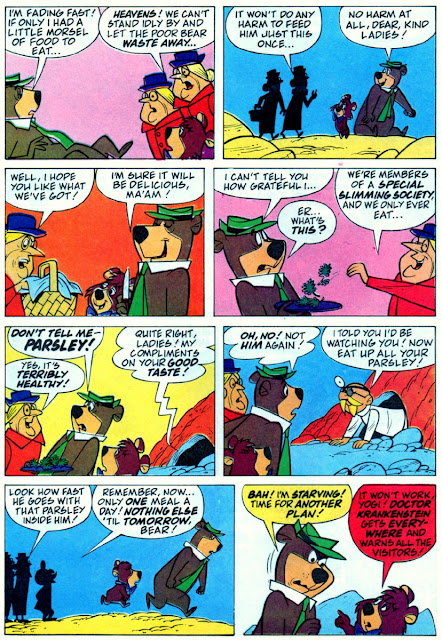 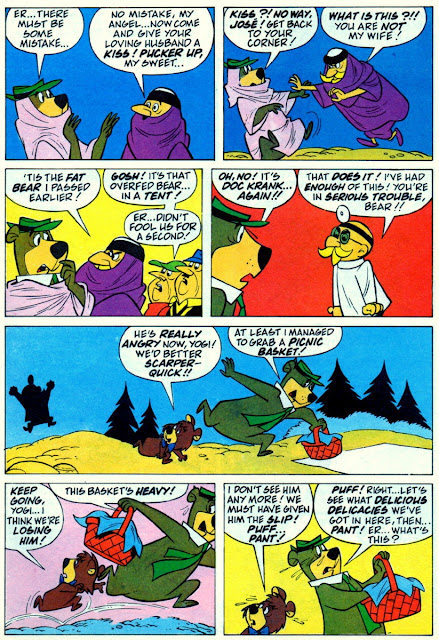 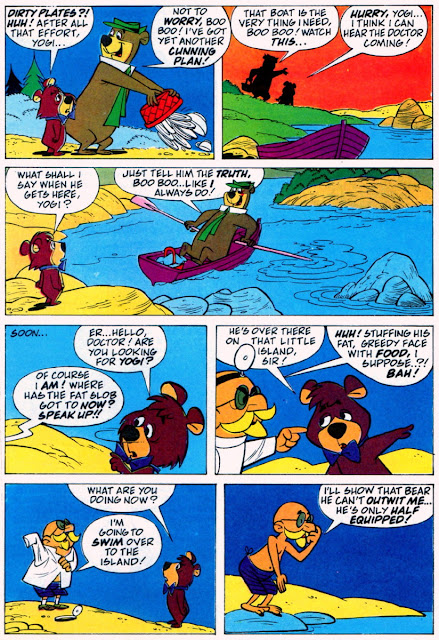 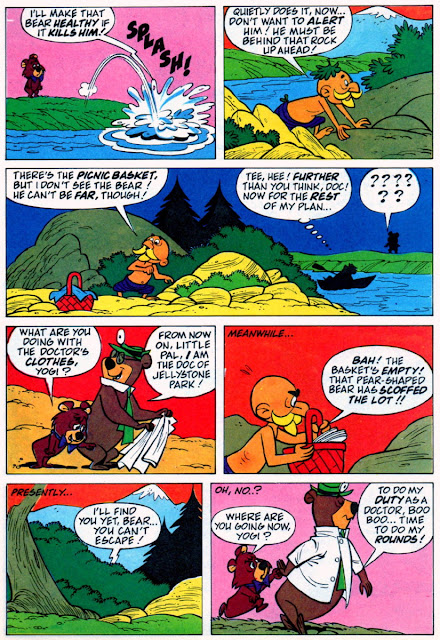 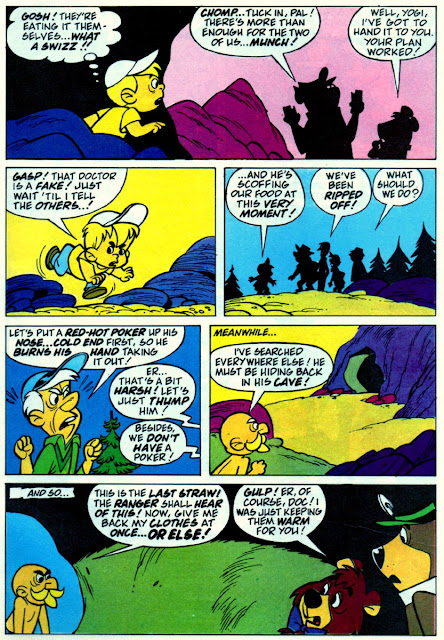 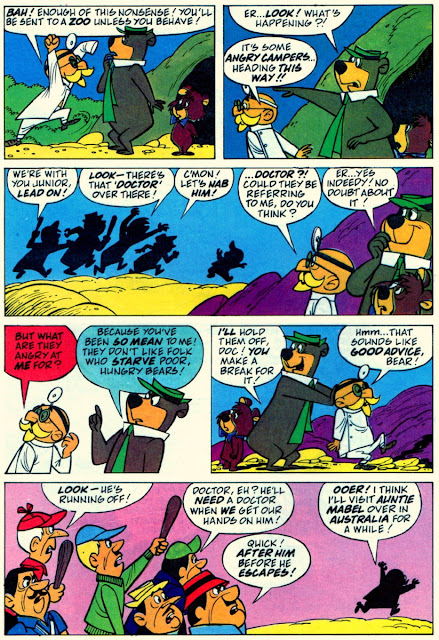 And below is the cover which contained the above tale. 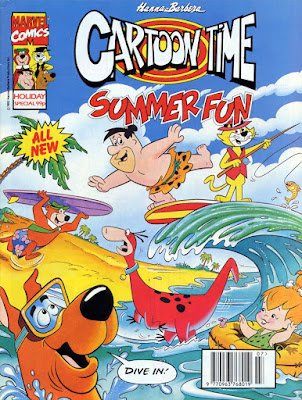 Hard to believe that an Editor wasn't aware of this character , Im not a big Yogi fan and I know its picnic (or "pickernic") baskets - did doing that have any effect on you getting other work fro that editor?

I think she'd only got the job because she could translate the foreign proofs (which had once been in English) back into English, PM. However, it's worse than that. The scripts had apparently been approved by whoever was representing Hanna-Barbera, so clearly they didn't have a clue either. When the editor first 'phoned me, I was busy and was going to turn the job down. However, I asked her if there would be a possibility of regular future work and she said yes (and, hey - it was Yogi Bear), so I accepted the assignment. Although I'd sought and got her approval for my amendments, she was clearly annoyed that I knew more about the characters than she knew (or cared to know), so to answer your question, no, she never gave me any more work - nor sent me the extra complimentary issues of the published comic she said she'd send. I did 'phone her a few months later and remind her of her promise (for such it was) to put a little work my way, but she was cold and distant. If there's any justice in the world, right about now she's asking someone "Do you want fries with that?"

It's worth pointing out that she'd only contacted me because her regular letterers were indisposed, so despite her empty promises, it's unlikely she had any intention of using me again anyway. (Unless another emergency popped up.)

It must have been a real buzz working on one of your favourite characters,albeit a short contract. I've never asked,but had you ever considered becoming an editor yourself at any point in time?

Actually, I was 'sort of offered' a job as a Marvel editor by another Marvel editor sometime around this period, Moony. I was told that they were always looking for editors and that I would have no bother getting a job as one, while picking up plenty of side-work as a letterer too. However, I'd have had to relocate, so I didn't pursue the idea. And yes, it was great to have the chance to make Yogi speak more like Yogi, instead of a personality-free automaton.