TEENAGE TALES: HARK, WHOSE VOICE IS THAT I HEAR? 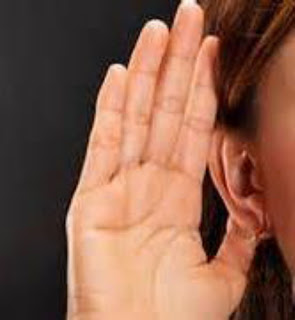 His first name is Saul, his surname is unimportant.  When he came up from England to work in my home town back in the early 1970s (I think, could've been earlier), his wife didn't quite fancy 'upping sticks' and therefore didn't accompany him.  Saul is what is known as a 'charismatic', born-again Christian (trust me, he hasn't an ounce of charisma) and believes that God talks to him.  He also 'speaks in tongues' and believes in modern-day miracles, like raising people from the dead - though the last time he tried that in the company of the group you read about in a previous Teenage Tales episode, him and his merry band met with a singular lack of success.

Saul is basically a good person, given to acts of charity and kindness, but, in my opinion, is seriously deluded, even mentally ill.  He fits the pattern of many religious fanatics of a Christian persuasion, being sensitive, highly strung, emotional, and 'socially awkward' outside of his own group of like-minded friends.  He once told me that God had informed him that he and his wife would one day be reunited, believing the situation to be a test of his faith of some kind.  After many years (around 12, I think), his wife decided to join him in Scotland and he was convinced this was the fulfillment of God's promise to him.  Alas, the reconciliation was short-lived.

After more-or-less leading separate lives for all those years, his wife now expected him to put her first in everything.  However, Saul had a routine, established over several years;  he had prayer meetings to attend, church business to see to, work commitments to deal with, etc.  His spouse decided that he wasn't making her his priority (not that she'd ever accorded him the same courtesy) and pretty soon pissed off back down to England.  Eventually, they divorced and Saul married a younger woman in his church, got a dog, had some kids, and is presumably extremely happy with his life.

I say 'presumably' because I jettisoned him as a friend over 30 years ago and haven't spoken to him since.  Nor do I want to, but I can't help but wonder how he explains (away) his former conviction that God intended him and his first wife to be reunited and live happily ever after.  Obviously, he was mistaken about that (in the same way he was 'mistaken' about God raising Mrs. Cowie from her deathbed), so how does he now account for his years of waiting for God's 'promise' to be fulfilled, only to find that it was based on nothing more than his own wishful-thinking?  Any normal person would put up their hands and admit they'd been a bit of a pillock, surely?

Here's an interesting insight into his type of mentality though.  Some time in the late '70s, Saul told me that God spoke to him one night and commanded him to fill up his bathtub (Saul's, not God's, as the Almighty obviously has no need of such earthly amenities) with water from the hot tap, untempered by cold water, and climb into the bath.  Saul dutifully did as he was ordered, nearly scalding himself in the process, then, having satisfied God with his humble act of subservience, climbed out.  Next, the Lord told him to fill the bath with cold water (after the hot water had been emptied of course) and climb back into the tub.  Saul obediently did so, almost giving himself a heart attack in the process from the shock.

I gazed at him in stunned disbelief.  "Do you seriously suppose that God, in the unlikely event He'd ever actually speak to you, would instruct you to do something which had such potentially harmful consequences to your well-being, if not your life?" I asked him, incredulous at the man's stupidity.  "Oh, I no longer believe it was God speaking to me" he replied.  My relief was short-lived.  " I think it was Satan!" he said, with no sense of the absurdity of his statement.

I'll let you draw your own conclusions about that true tale from my teenage years, but it's a shocker, isn't it?  Just imagine, someone like Saul could be living next door to you.  You'll just have to hope that 'the voice of the Lord' he hears in his head is a benevolent one.  However, whatever you do, if he (or she) ever tries to give you marriage guidance - or, worse - offers to run a bath for you, make your polite excuses and remove yourself from their presence right away.  Those types of people often run hot or cold (little joke there) in the mental stability stakes, I've found.

Well, gotta go - the small voice in my head is calling, so it's time for me to take one of my little red 'Smarties'.  If you know someone like Saul, feel free to record your experience of them in the comments section.

And make of the following verse what you will:

The thing is, a lot of people DO hear voices in their head ( usually telling them to do horrible things ), so I guess people who believe these voices to be God or Satan are afflicted by an offshoot of schizophrenia?
Unless they actually ARE possessed by a demon, which, like Ouija boards, etc. is an area left well alone!
Unless you're a priest.
But not one like Fthr. Dougal Maguire!

Who has a lovely blue jumper.

It's obvious - God changed his mind.

More likely to be that the Devil deceived him by impersonating God, BS. That was his cop-out for the bath nonsense.

Didn't God do horrible things to Job in order to test his faith so perhaps Saul felt the same about God telling him to get in a scalding then freezing bath. These fundamentalist nuts have an explanation for everything - 81% of American evangelicals voted for Trump and claim that the orange messiah was especially chosen by God to make America great again ! The only fundamentalist I knew was, as I mentioned recently, my teacher in the final year of junior school, Mr. Jones. I also knew a black mormon called Ade and I asked him what he thought about non-Christians like Muslims and Hindus - "They are just wrong !" he confidently proclaimed.

Strictly speaking, CJ, God allowed Satan to do horrible things to Job to test his faith - if you believe that particular interpretation of the reasons behind Job's suffering. Incidentally, Muslims and Hindus think that Christians are equally wrong, so fundamentalist Christians don't have a monopoly on that particular attitude.

You don't have to tell me! I love the circular logic.

No wonder they go around in circles, eh?