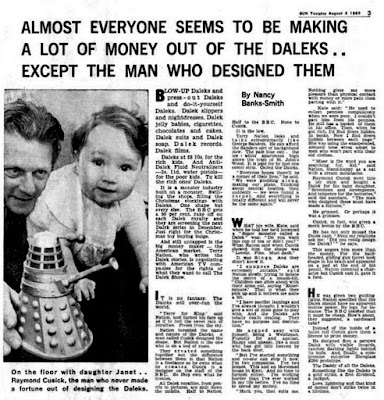 I'd always imagined that the story of RAY CUSICK not
profiting from his design for The DALEKS was a relatively
recent revelation.  (Around the 1980s sometime, which seems
recent to people of my age.)  Surprisingly however, it was being
reported as far back as 1965, only a couple of years after The
Daleks had first appeared on TV in Dr. Who.  Read all about
it in the above article.  It's a bit faded, so you'll have to apply
yourself.  (Click to enlarge, click again for optimum size.)  I
wonder what he thought when he first saw the MARX
TOYS version of his design?
Posted by Kid at Tuesday, March 21, 2017

It was grossly unfair. Some people, who have absolutely FECK all to do with Daleks will have earned an absolute fortune from the amount of merchandise that has been produced to date!

I believe he got £100 bonus, but that's nothing compared to how much The Daleks have raked in over the years. However, I must admit I'm torn over the issue, JP, as he was a BBC salaried employee doing the job for which he received a wage, so legally he wasn't entitled to more. And it was Terry Nation who created and (sort of) described them, so Ray had something to go on. Had he been freelance, he'd probably have become a millionaire off the back of The Daleks, but he knew the deal going in, so...