FURY was an odd mag for MARVEL, in that it tried to emulate the appeal of rival weeklies like VICTOR, HOTSPUR and BATTLE, and steal a slice of the U.K. war comics market for itself.  It never really caught on though, consisting of a hodgepodge of reprints from Marvel's back-catalogue of various war-themed stories, and lasted for a mere 25 issues before being merged into MWOM.  (And take two demerits if you don't know what those initials stand for.)  On the plus side, from issue #3, the covers were drawn by CARLOS EZQUERRA, so let's look at the first 'dirty dozen' of them right now! 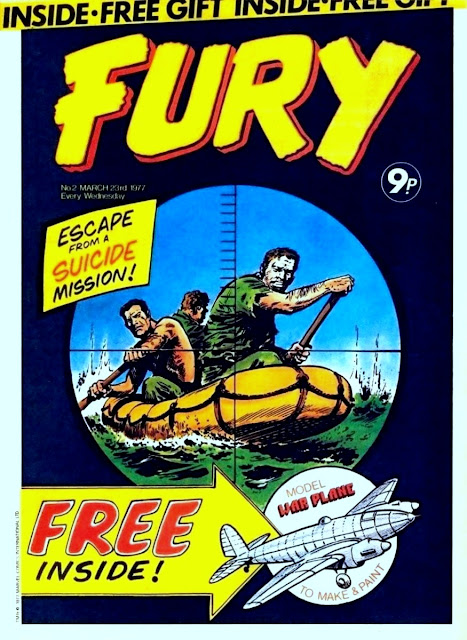 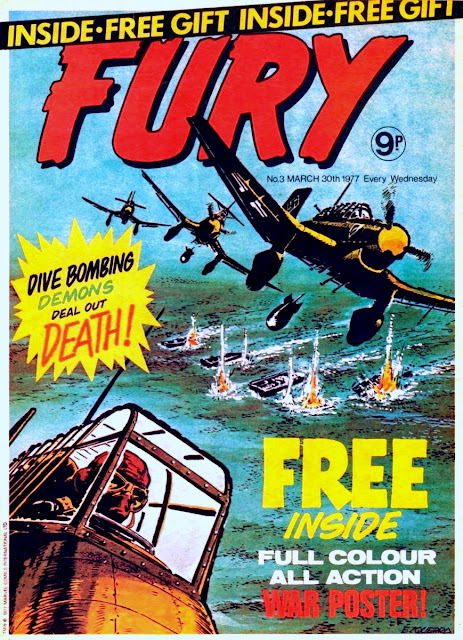 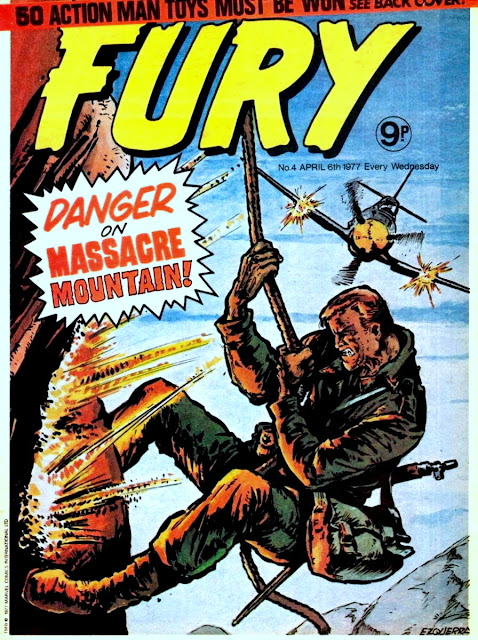 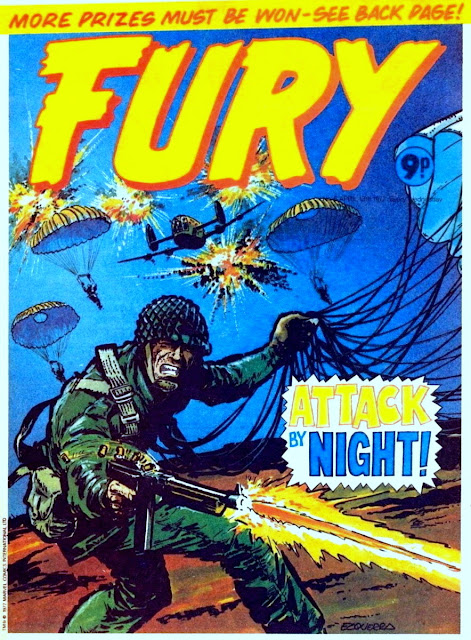 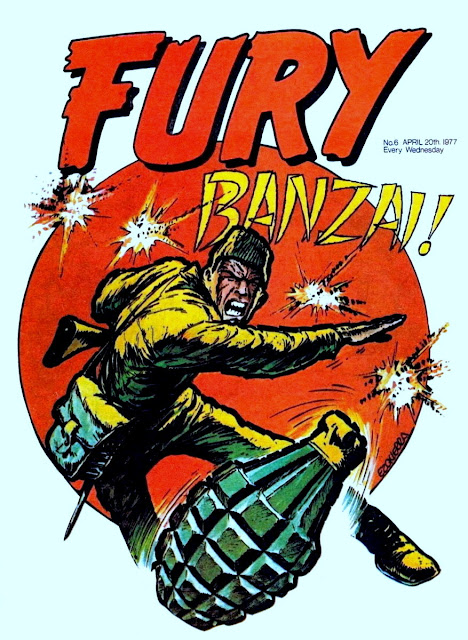 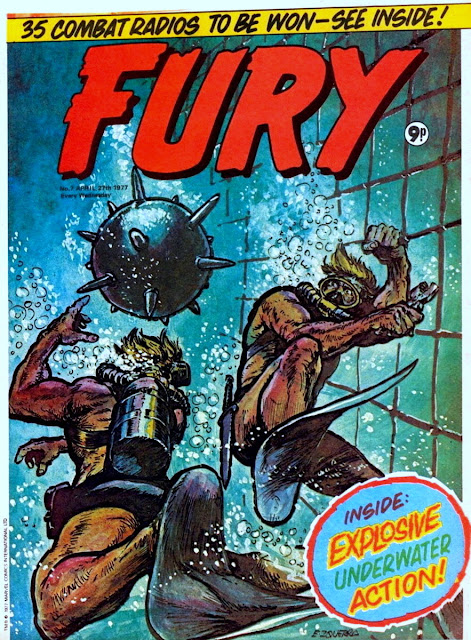 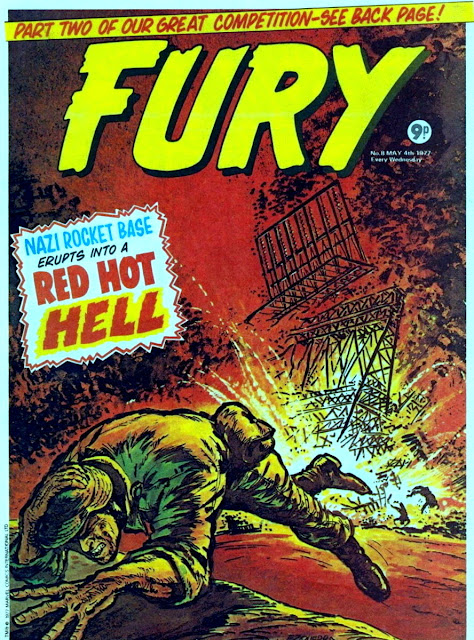 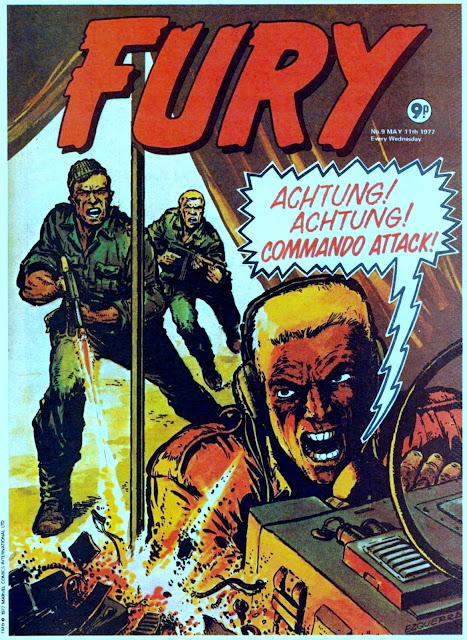 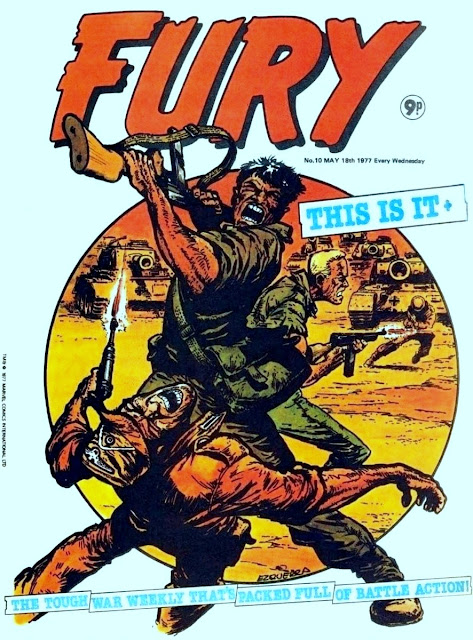 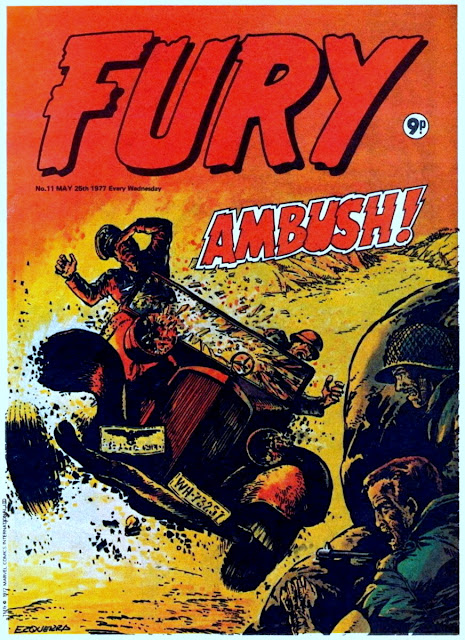 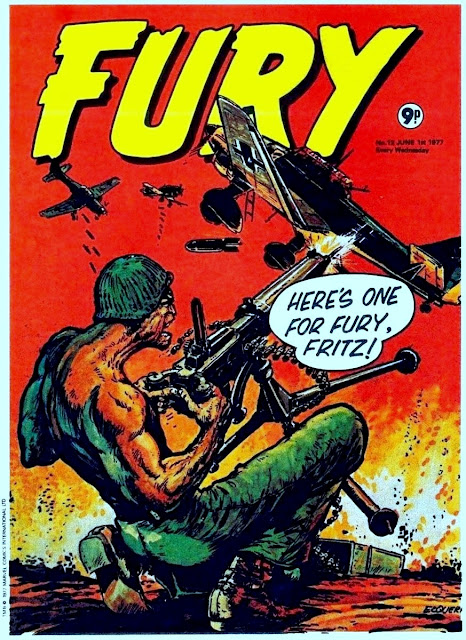 I had no idea until now that Carlos Ezquerra had done any work for Marvel, very interesting. Great covers too, although they were obviously trying to compete with the Victor and the Warlord.

I always had a bit of a softspot for Captain Savage, who according to Wikipedia, was included in Fury. I went to a second-hand bookshop in the mid-80s to look for comics and they had a disappointingly tiny selection of mostly DCs - being a Marvel fan, I chose two ragged old comics that I didn't really fancy but thought the very fact they were Marvels was some guarantee of quality. They were Captain Savage #5, which was insanely entertaining, and an old Two-Gun Kid comic - no idea of the issue number but the story was a hundred times better than I expected.

Another really good Marvel war/supernatural comic was War Is Hell, no idea if they've ever collected it, but if not I wouldn't imagine the original issues would be too expensive.

I think I've got the 1st or 2nd Annual of Captain Savage tucked away, DD, but the character never really grabbed me. It's surprising how many stories (like Two-Gun Kid) you wouldn't think were going to be up to much, turn out to be quite entertaining. I imagine that, if War Is Hell hasn't yet been collected, it'll happen one day.

I remember buying one issue of Fury out of curiosity but I can't recall which one - #6 looks familiar so perhaps that was it.

I wonder what non-Marvel fans who were into Warlord, Hotspur, Victor, and Battle, etc., thought of it, CJ. Not much it seems, or it would've lasted more than 25 issues.

Fury lasted longer than the Savage Sword Of Conan weekly - I wonder why that failed ?

I vaguely remember this comic but Sgt. Fury and British war comics in general weren't as good as the EC war comics. Which were much more adult in a war us hell kind of way.

Simple, CJ - not enough people bought it. However, when Marvel brought it back as a monthly not long after, it lasted around 9 years.

Yeah, but British war comics (British comics in general, in fact) were aimed at a much younger readership to begin with, PS, although they gradually became a bit more violent over the years.

Seeing these covers again, I got to wonder, "Was THIS a pivotal moment in comics history?"
I wonder whether jobbing artist ( at that time ) Carlos got the tenure to do his run of covers, because Neil Tennant liked them?
Carlos has said in interviews that his big break came in Battle with Major Eazy, so I wonder if he got THAT particular break, because he had done such a sterling job with his Fury covers?
I attribute the success of 2000 AD to Carlos's portrayal of Dredd and to his Star Lord's Strontium Dog, which merged into it! I don't know if the comic would have fared so well without Carlos's input, despite homing many other great artists.
So, perhaps, just perhaps, we might have Neil Tennant to thank for old Twoothy?
( Just a thought! )

Except for the fact that he was drawing for Battle before Fury came out, JP. Nice theory, but wrong. (Ouch). In actual fact, it looks like he was probably given the Fury gig because of his Battle covers and interiors.

Oops, should have checked!
I guess I won't need to buy that Pet Shop Boys CD after all!

With regard to the 2 Conans, I don't know why, but I always preferred our b&w Savage Swords to the US CTB's. Something about the story telling used to draw me deep inside the story more in the mags than the colour comics!

I quite liked both on occasion, JP. The Mike Ploog colour issue is a belter.

I didn't know you swung that way, JP, but to each his own. (See what I did there?)