BLUE PETER first appeared in b&w on our television screens on October 16th, 1958, but it wasn't until September of 1964 that the very first Blue Peter Book was published by LUTTERWORTH PRESS in association with the BRITISH BROAD-CASTING CORPORATION.  It presumably sold well, for the next edition in 1965 was published by the BBC itself, and continued to be so for many years until WORLD INTERNATIONAL Ltd., then PEDIGREE, took over.

The best-known presenters of the show were CHRISTOPHER TRACE, VALERIE SINGLETON, JOHN NOAKES, PETER PURVES and LESLEY JUDD, and few presenters since then have been as memorable or as highly esteemed by viewers as the 'famous five' were in the '60s and '70s.  A couple or so years back, I was sitting out in my garden shed listening to the radio, when LAST WORD paid tribute to a famous cyclist who had passed away.  John Noakes had once interviewed him on Blue Peter, and to hear a clip of the younger Noakes' familiar voice emanating from my radio took me right back to the '70s when he had yet been a regular presenter on the show.

Christopher Trace had been the main man from the programme's inception in 1958, of course, and it was sad when he left on July 24th, 1967, leaving Val and John to present the programme alone until Peter Purves joined in November.  Curiously, the Fourth Blue Peter Book makes absolutely no reference to Christopher Trace's involvement in the show that year, perhaps because (as legend has it) the production staff found him difficult to deal with and, secure in the knowledge that Noakes had proven a hit with the viewers, accepted Chris's oft-threatened resignation when he again offered it during some spat or other.  No photos, no mention, which seems unnecessarily spiteful considering that Chris had spent nine years with the show, being the longest-serving presenter at that time.

The Seventh Blue Peter Book is also a bit unusual, in that it's the only one I have in my collection which has a 'wraparound' photo on the cover, all the other ones using the same photo on the back as on the front, though there may be other exceptions to this practice of which I remain unaware.  (Yup, there was.  I've just acquired Book seventeen from 1980, which also has a similar style of cover - as do at least the next three.)

Anyway, this is the first in a two-part gallery, featuring all fifteen books that featured Chris, Val, John, Peter and Lesley on the covers (though not all at the one time, obviously).  Without the original 'famous five' presenters, Blue Peter was never quite the same - at least to those of us of a certain age.  These pics will hopefully stir a few happy memories in the hearts and minds of those who grew up in the '60s and '70s, and to whom the programme was a regular part of their lives.  (You'll have to hold on until the next instalment to see Lesley, I'm afraid, but she's well-worth waiting for, I'm sure you'll agree.) 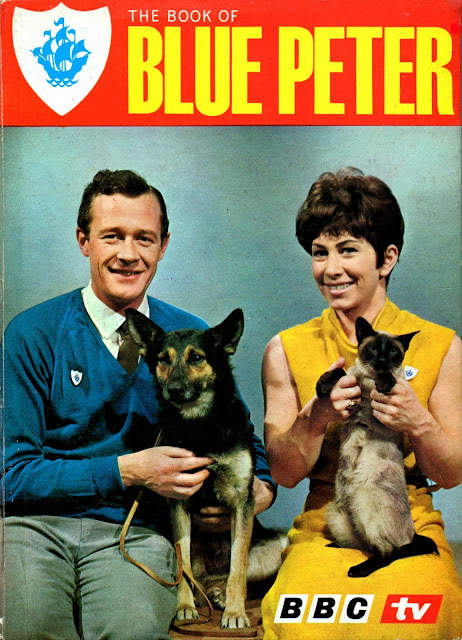 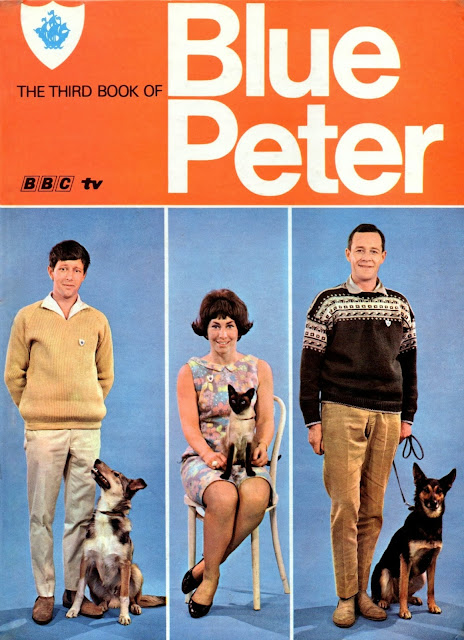 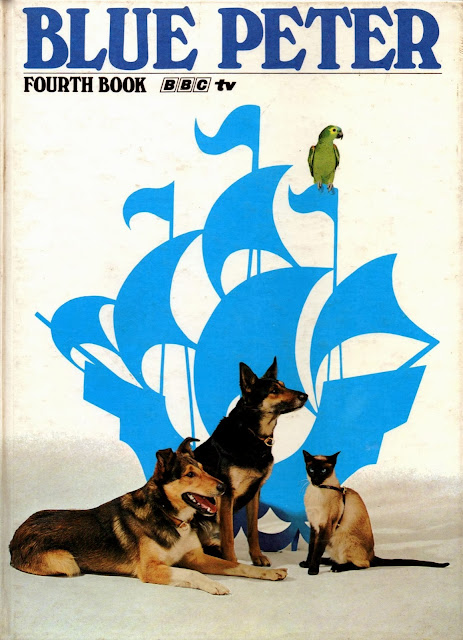 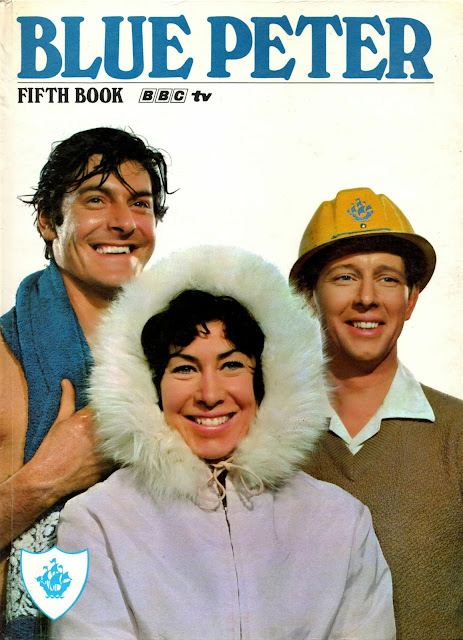 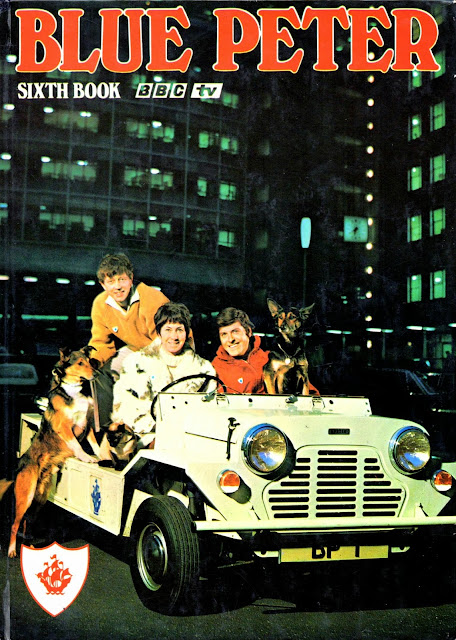 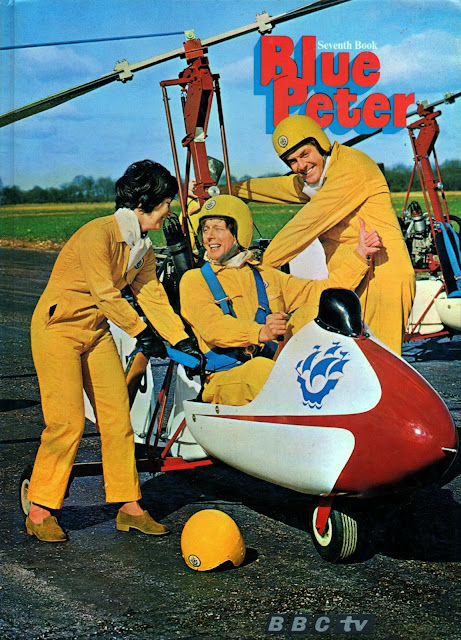 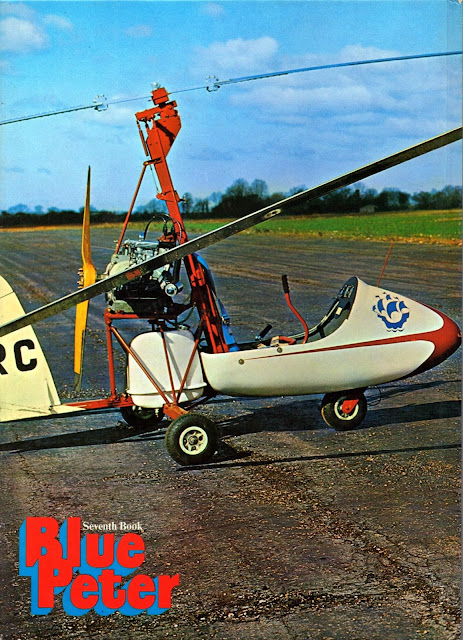 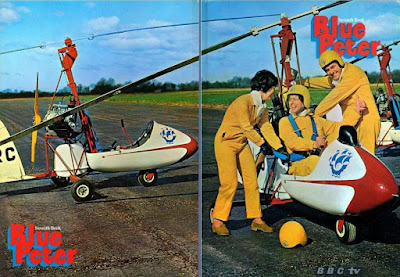 I heard an off hand reference to "Blue Pete" on Top Gear some time ago and didn't have a clue what it meant. I knew it must've been a TV show but that was it. Thanks for filling that gap a bit.

No problem, Rip. It's a 'magazine'-type show for kids, called Blue Peter (after the flag) because each episode is considered a 'voyage of discovery'.

Aw, GB - you've stolen the end line from Part Two (already written and waiting in my draft file). Did you know that when John Noakes advertised double glazing (I think) on TV, 'Shep' was a ringer?

Sorry, Kid, but I couldn't resist.

Didn't the Beeb frown upon anyone using their characters or stars to advertise in those days?

I have to admit I was never a big Blue Peter fan and much preferred Magpie on STV. The BBC shows in those days were a bit too nicey-nice for my taste compared to those on the Independent channels - TISWAS over Multi-Coloured Swap Shop being another example.

Have you made your advent crown yet?

Didn't the adverts replace Shep with Skip, because Shep technically belonged to the BBC and they couldn't allow their property to be used for advertising?

As for the annuals, I think my sister had the fourth book. Sadly, I can remember little of its contents other than it had a drawing of an MC Escher style never-ending staircase on one of its pages.

GB, that was indeed the case. Interestingly, John Noakes claimed that Biddy Baxter wouldn't let him keep Shep when he left BP, but she claims that he didn't want the dog when he was told he could have Shep as long as he didn't use him for commercial profit. I enjoyed Magpie as well - couldn't see much difference between the two programmes really. And I watched TISWAS and MCSS. I channel-hopped between them, I think - unless they were both on at different times.

Don't need one, DSE - I was born with my very own Advent crown. And three wise men turned up at the hospital with presents. (Okay, they were cops with search warrants to give to my dad.)

That's the fact of it, Steve. However, the staircase must be in one of the other books because, having just looked at #4, the only staircase I can see is in a photo of John Noakes climbing the stairs of Big Ben. And you can't really see the stairs because of the angle of the shot (looking down).