You've all read me rabbit on before about how certain items, whether they be comics or toys, can take you right back to the time and place (in your mind at least) when you first owned them.  And here's yet another example.  A while back I managed to obtain a JR21 TB2 toy, though without the little green jeep that sat in the pod.  I used a stand-in until recently succeeding in obtaining an original TB2 jeep, and whenever I look at it, I'm right back in the bedroom of my previous residence back in the '60s, so strongly do I associate the item with the house.

It's an odd sensation, because it's almost like inhabiting two different places at the same time.  Or in my case, five different places, because I have things (or replacements of things) from almost every house I've ever lived in.  One exception to this feeling, even though certain items yet survive from my time there, is the tenement apartment in Glasgow's West End, from which we moved when I was only one-and-a-half and therefore have no memory of having stayed there.

Anyway, forget that load of ol' pants, 'cos this is just an excuse to show you my TB2 again, but this time with the (out-of-scale) jeep it would've had when first manufactured back in the '60s.  Oh, happy day!  However, I feel compelled to tell you the full story.  (Don't worry, it's short.)  I actually had to buy another TB2 to obtain the jeep/land-rover, so I now have a spare JR21 TB2.  Although I'm by no means decided on whether I'd part with it, if anybody would like to make me an offer, I'd certainly consider it.

Update: Typical!  A couple or so weeks before I obtained my second (third if you count my original one back in the '60s) JR21 TB2, I found spare decals for another TB2 model I had.  However, when it came to finding them again so that I could replace the missing '2' decal on the nosecone, I just couldn't remember where I'd seen them.  Nothing for it then but to make one myself, so I lettered a '2' on an adhesive label, cut it out, and applied it to the nosecone.  Not too bad, eh?  (See pics below.)  It'll do 'til I find those darn decals. 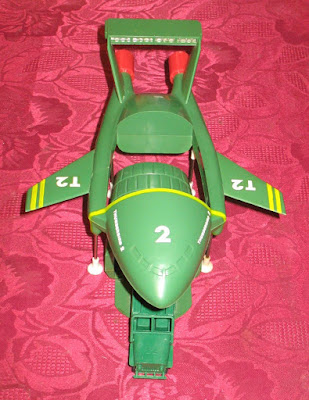 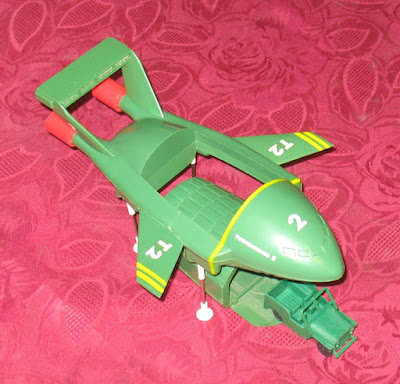 Quite simply the best toy I ever owned!!!!!It is also the greatest toy in the world!Also the finest die cast model ever produced in the 60's,in itself the finest decade for tv inspired models!!!(steady,steady medicine required immediately).Like yourself Kid I loved this toy(really)and the best part of Thu derbies was the selection process of the pod just before they took off to rescue trapped miners,trapped New Yorkers inside the Empire State building which was being moved,Yes moved to a new site!trapped by a big fire,trapped by giant Alligators,etc etc etc.The plot did not vary but I loved those shows.Happy happy nemories Kid.Stay well,I am off to calm down!!!What was your favourite episode mate?

After so many decades, TF ('cos I saw them first time around), they merge together in my memory, so I don't think I could pick a favourite episode. I've got the boxed dvd set of course, but aside from the extras, never actually watched them (again) in all the years I've owned it. Maybe one day.

I'd like to say that women are always gifting me with little tokens of affection, McS, but it would be a lie. Don't really know where it came from, it's just been there for years.

Incidentally, have now added your blog to my sidebar list, so you'll have to start publishing more posts.

Why is it I remember Thunderbird 4 as the vehicle being transported not the Jeep? Maybe it’s the 90s reissue toy.

The '60s JR21 TB2 had either the Jeep or what was purported to be the Mole, PS, though it didn't look much like it. I think there was a Spanish company called Molto (or something like that) who also released the same Thunderbirds toys - maybe the Mole was included with theirs, can't quite remember. Yeah, it was the big Matchbox TB2 that had TB4, and Vivid Imaginations later did their own version which also had TB4.

Thanks Kid appreciate that. I'll try publish 2 a month at present work is so busy etc. I'll sort out a sidebar list as well