REFLECTIVE REPOST: LETTER IN A SHOEBOX... 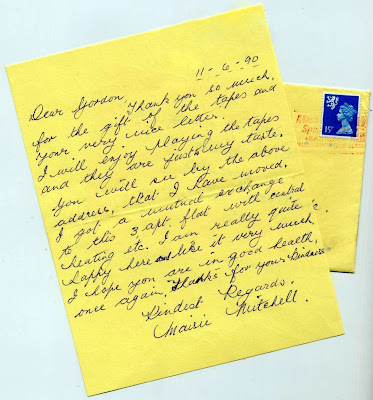 You know what it's like - things start to pile up and make the place look untidy.  If you're like me, you start stashing things away wherever you can find a space for them.  With yours truly, that space is usually an old shoebox, of which I have several.  Old letters (some unopened), bank statements, leaflets and the like.  I was going through one such repository of assorted items earlier this evening and discovered a letter from 1990 amongst the contents.  It was a nice 'thank you' letter from the woman who'd once lived in the very house in which I now reside, before swapping residences with us back in 1972.
As related in an earlier post (here), we lived in her old house for eleven years before moving elsewhere, only to move back again just over four years later.  We'd been back only a few months when a friend informed me that the field I'd played in as a boy (across the road from the house we'd vacated in 1972) was due to have amenity housing for pensioners built upon it, which, to me was very sad news indeed.  I always feel much the same when I hear of a childhood landmark about to bite the dust - there goes my past.
Anyway, one night I boldly chapped the door of my old abode and clued in Mrs. MAISIE MITCHELL (who remembered me from all those years before) about the upcoming fate of the field across the road.  Would it be all right to come along some day and capture it on film before it disappeared forever?  Mrs. Mitchell was agreeable to accommodating my over-developed sense of nostalgia, and, some months later, for the first time in sixteen years, I crossed the doorstep of my childhood home.  (Well, one of them.) 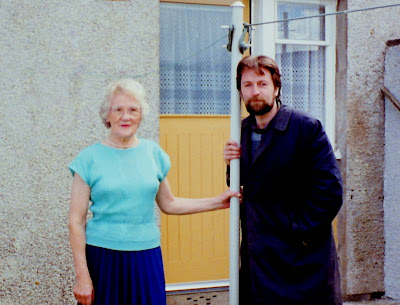 I got some good photos and made another couple of trips over the next few weeks, to grab a few more snaps of what I'd missed first time around (she'd kindly let me take some pictures all around the house) and, on the last occasion, to present her with a box of chocolates and a little ornament to thank her for her kind indulgence.  I also gave her a cassette tape of JIM REEVES and said I'd give her some other music the first chance I got.  Some time later, I duly posted them to her as I didn't want to wear out my welcome by turning up on her doorstep yet again like the proverbial bad penny.
Some weeks (if not months) later, on the 14th of June, 1990, I received a letter from Mrs. Mitchell, thanking me for the tapes and informing me that she'd now moved to another address.  (If I remember correctly, she told me in a subsequent conversation (either by 'phone or in person) that the tapes had been forwarded to her from the old address to which I'd sent them.)  She was only in her new flat for a few short years before she died, making the effort of moving seem more trouble than it was worth to my way of thinking, but obviously she had no way of knowing what the future held for her.  (Who does?)  Interestingly, her new home was quite close to ours, being only a few minutes away in the same neighbourhood.  It's a shame she never got to enjoy it for longer.
As I re-read her letter, it brought back memories of my old home and my visits back there.  (I returned in 1991 to shoot a video, by arrangement with the new tenants who'd swapped with Mrs. Mitchell only the year before.)  It struck me as being somehow oddly significant to be reading a letter from someone who'd once lived in this very house, addressed in her own hand to her previous residence - while probably being completely unaware of the profundity inherent in such a situation. When I'd posted her the cassettes, I was only too well aware of how strange it seemed to be sending something to an address that was still all-too familiar to me - that still felt like 'my' address, not someone else's.  However, I realize that not many people think in quite the same way I do, which, on reflection, is probably a good thing.
Anyway, I cleared out quite a few things from that old shoebox, but I decided to hold on to Mrs. Mitchell's letter.  It somehow seems right at home here.
Posted by Kid at Tuesday, March 02, 2021

Most definitely keep the letter as you have that part of her to look back on as you have just done now.Mrs Mitchell sounds a very nice lady. Mrs Mitchell will not be forgotten.

Yes, it was good of her to allow me into the house to take my photos, LH. She didn't have to, but because she did. I was able to get photos of the house from top-to-bottom, apart from the loft. However, I got photos of the loft on another visit three years later when a new tenant was ensconced in my old abode.