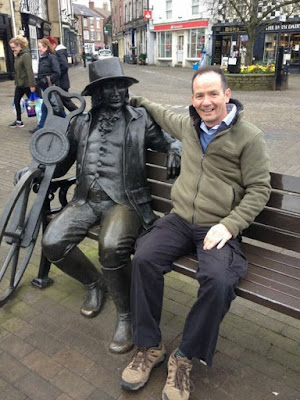 You may recall me telling you about a former neighbour (Robert Baird) passing away from Covid-19 recently, and I've just been informed tonight that the person who told me (another former neighbour from the same street) has also passed away, though it doesn't seem to have been Covid-related.  Kenny Tierney was his name, affectionately known as 'Wee Barra', and whenever he saw me in the local shopping centre, he always took the time to stop and have a wee blether.

Ironically, Kenny used to live directly across the back from Robert's house when I lived in the area (and for a few years after I flitted in 1972, Robert's family relocating to Essex around '76), and it's sad to think that I'll never see either Kenny or Robert ever again.  Hopefully they're playing a game of football together somewhere 'up there'.

So condolences to Kenny's family, friends, and colleagues.  It sounds like a cliche, but he was liked by everyone and the world is a poorer place for his passing.  I've borrowed a photo from his Facebook page, and also included a photo of him, his dad, and his brother back in the '60s, which he himself supplied me with a few years back when I was doing a post about his dad.  Rest in peace, wee man. 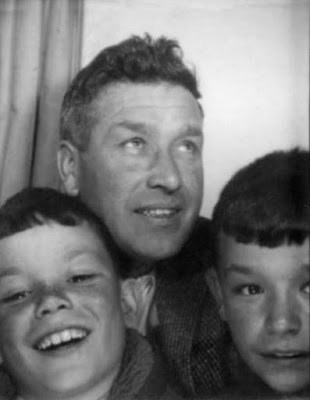 And below (left to right) is me, Robert Fortune, Tony Tierney, my brother, and Kenny (kneeling).  Photo taken by Kenny's and Tony's dad in the '60s, when the neighbourhood was the best it's ever been. 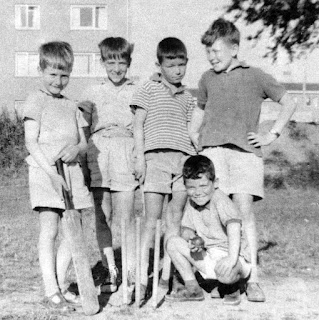 How sad. I was just thinking of life yesterday and how it’s going faster.

It sure is, PS. We're halfway down the other side of the hill and picking up speed, with our climb to the top seeming like only a moment ago, and not having had enough time to enjoy the view when we were there.

Seems like passing is the thing. I nearly passed away three weeks ago from a blood clot in the lung. Good surgeons saved me. My deepest sympathy to the loss of your neighbour and friend

Thanks, and my sincerest wish that you'll make a complete recovery from your recent near-date with death, LH. (You look like Russell Crowe in your avatar.)

I can't shave as I have vents in my throat for Dyalasis.

You have discovered my true identity. A bit like Superman going back as Clark Kent. I am Russell Crowe and when not LH. Thank god I don't look like Ena Sharples

Ena Sharples? H'mm, now that you mention it, LH...

Sorry to hear about your friend Kid, seemed a really nice guy and way to young. Condolences to his family at this awful time. Lionel what a thing to go through I hope things get stronger and better soon, take care.

Never heard him say a bad word about anyone, McS, and never heard a bad word said about him. If only more people were like that, eh? Yeah, way too young.

Its really sad (scary almost) when you see photos of friends when they were young. It seems at times like yesterday when we were that age (although at times, for me at least if feels a lifetime ago)when we were young full of fun , energy and excitement little knowing what was ahead for some of us. Life doesn't seem fair at times.

Oh I meant to add, Scotsmen (kids) playing cricket, it's not natural I tells ya!

Yeah, that's a perpetual paradox, McS, often voiced on this blog. How can things from the past sometimes seem so recent - and also a 100 years ago at the same time? I suppose it depends on from which end you approach a memory, eh?

As for playing cricket, apart from holding the bat while posing for the photo, my only activity in the game consisted of dodging the ball when it just about crowned me. Missed me by inches. Had it been a game of football, I'd probably have had my foot on top of the ball for a photo, without ever touching it during the game. I'd have been on the field, but keeping well out of the way. That was my usual tactics when involved in anything resembling 'sport'.

Thanks McScotty. It will take around six months before I'm over this fully. One minute your standing then it's all on the surgeons. And as Kid said I escaped the near date with death.

And I'm sure everyone who comments on Crivens is glad of that escape, LH.