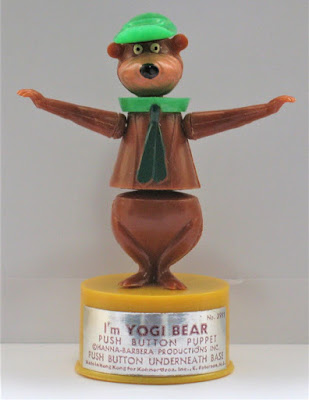 Here's the other '60s Yogi Bear collectable I mentioned a few weeks back (the first being the smoking Yogi).  This is likely to be one of the earliest pieces of Yogi merchandise, as Yogi appears to have on a waistcoat.  Some other examples of early products showed him with a bow-tie, a shirt front, or a combination of both, so I can only wonder about what reference material the manufacturers were being supplied with.  Having said that, Hanna-Barbera would've had to 'okay' the designs submitted to them, so perhaps they weren't too bothered about trivial divergences in regard to their characters, as long as they were recognisable.
This is a toy I've wanted for a long time and have now got (yes, that's my photo), as it conjures up the '60s to me at one glance.  As a toy it doesn't really do much apart from collapse like a drunken bear when you push the button at the bottom of the base, but hey, it's Yogi Bear and that's all that matters to me.
And here's a question that suddenly occurs to me:  Out of all the famous bears, like Yogi, Boo Boo, Barney, Winnie (the Pooh), Rupert, Baloo, Paddington, Biffo, Smokey, Fozzie, Ted (from Andy Pandy), etc., which one is your favourite?  (Or used to be when you were a kid.)  Or if there's more than one, list them in order of preference.
Posted by Kid at Thursday, March 25, 2021

How could I forget Boo Boo and Fozzie, LM? I'll add them to the list. Not familiar with Andy Panda, but the UK's Andy Pandy had Ted for a pal, so I'll add him too.

My favourite bear characters as a kid were; 1: Barney Bear ( loved those old MGM cartoons) 2: Biffo the Bear 3: Yogi 4: George and Junior ( MGM cartoon bears that parodied Steinbecks " Mice and men " book. 5: Kung Fu Panda (although only know him as an adult but it's fun)

Haven't seen any Barney cartoons in decades, McS. TV Comic used to run a strip of Barney years back which was quite funny at times. I used to find the '70s Paddington TV show tremendously hilarious as well. In fact, I bought a Paddington toy in a shop that closed decades ago - still got it too.

The 2 Paddington Bear films, if you haven't seen them are really good. I was watching s Barney Bear cartoon today on YouTube a great character imho.

Yeah, I've got them both on dvd and they're absolutely excellent. Hugh Grant is great in the 2nd one, especially in the end credits where the routine casts back to the ending of The Producers. Top Stuff!

Don't forget Bungle from Rainbow, the Hair Bear Bunch and the Three Bears from Goldilocks!

Always was and am still a Yogi fan, and Boo Boo too for that matter. Those earliest Hanna-Barbera cartoons still make me laugh out loud. Fozzie was a winner for a time, but he's a bit musty these days. Pooh was always a mope. One bear I remember fondly as a little fellow was Smokey the Bear, always looking out for errant campers and their wayward fires.

So Smokey was educational as well as entertaining, eh, RJ? Did you see the Yogi movie a few years back? What did you think of it?

One of my favourite things as a lad was those little rubber faces you could buy with the holes in the back where you put your fingers. You'd move your fingers around and the face (usually a guy with a moustache) would gurn. Hours of fun from such a simple thing!

Yogi and Boo Boo. Paddington.
Rupert alas I found a bit of a nerd with his scarf and jumper. Fozzie I loved for his bad jokes. I should have liked Winnie more but I soon realized the American accents of him and Christopher Robin somehow annoyed me though I do think they got the whimsy of the stories right. Biffo I never liked as much as Korky the Cat. Whom I really do miss.

I remember those things, DS, though I hadn't thought of them in years (decades even) until you reminded me of them. Now I'll have to track one down.

One of the other things about Disney's version of Pooh, PS, is that they say his name is Edwyn, presumably because they're trying to suggest that's where 'Winnie' comes from. However, in the books, it's 'Edward', not 'Edwyn'.

They're on Ebay called Flexifaces, although a bit more costly than the ones I remember!

Ta much, I'll take a look, DS. Of course, everything these days is more costly than either of us remember. You seen the price of Mars Bars? Strewth!

Have you seen James Brolin’s screen test for James Bond? It’s on YouTube. It’s like that it’s very good but the accent is all wrong. And it just bothers me. Pooh of course is huge in Japan but banned in China because of the meme he looks like the President of China. Which he does lol.

I've got the screen test on one of my Bond DVDs, PS. Brolin had the face for Bond, but he was a bit too round-shouldered, and, as you say, the accent didn't quite work.